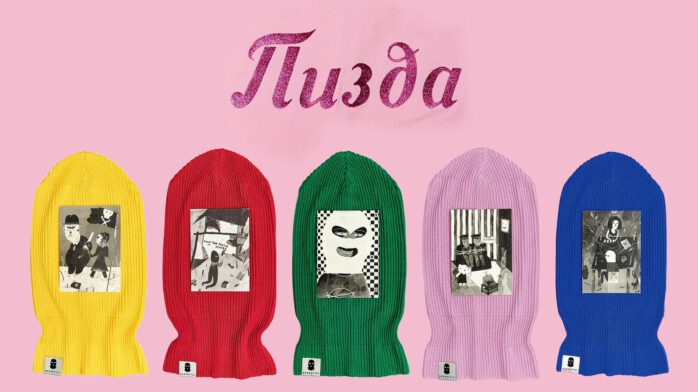 Despite the fact that outwardly vocal opponents of Vladimir Putin have a nasty habit of dying or disappearing, in 2014, Moscow-based ruble-rousers Pussy Riot launched Mediazona, an independent publication dedicated to fighting the Russian President’s system, including his courts, his prison system, and his enforcement of the law enforcement in general.

As we know, the Russian Federation government isn’t exactly supportive of free-thinking, independent companies of any kind—much less a publication openly critical its censorship, lack of LGBTQ rights, and all other aspects of Russian life where the unflinching grip of Putin can be felt (so, all aspects of Russian life).

To aid in keeping the lights on and the blood pumping through Mediazona’s editorial office, Pussy Riot has teamed up with clothing company Kultrab and designer 9cyka to collaborate on some very cool swag.

All of these and more can be found on the Mediazona Website.

Sure, Mother’s Day has passed, it’s never too early to start preparing for next year with this how-to graphic tee depicting a woman in a mask, tossing a Molotov Cocktail:

Or how’s about this pink t-shirt adorned with the word “Pizda” (“Cunt” in Russian):

No activist’s getup is complete without a “Fuck the Police State” patch set: 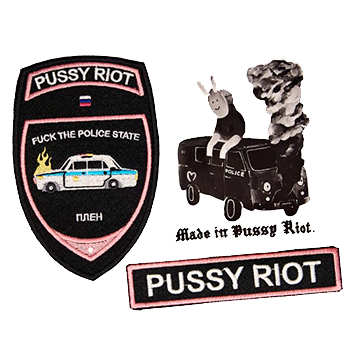 Since June is Pride Month, honoring the 1969 Stonewall Riots in Manhattan, might we suggest pairing your “Free Pussy” socks with a “Pussian Federation” T-shirt? You’re sure to be the envy of every kitten in the parade, and you have the added bonus of knowing that big dumb repressed ‘phobes like Putin are tucked away in the safety of their bunkers, secretly envying the freedom that they pretend to not be stealing.

To complete the look, brightly hued balaclavas (i.e. ski masks) are available to hide from the KGB (or the Alt-Right) whilst launching your Molotov(s):

Pussy Riot will be smashing the state in style and speaking freely at Riot Fest 2018, September 14-16 in Chicago’s Douglas Park.

Tickets are available now, thanks to capitalism.