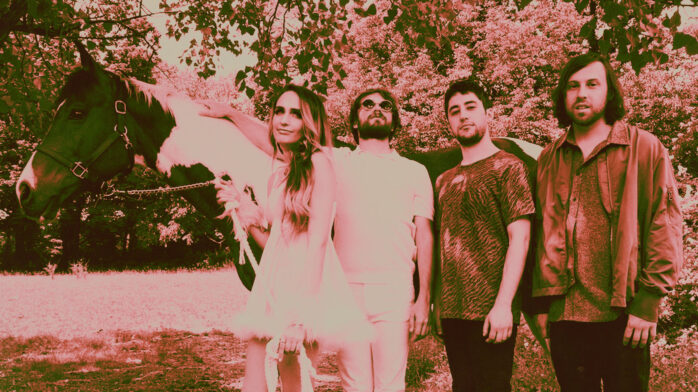 Sadie Dupuis from Speedy Ortiz Waxes Off on Nicki Minaj, What A Twerp Verse is, and More Nicki Minaj

Speedy Ortiz is not a ‘90s band, no matter how much you wanna compare them to Dinosaur Jr. Front-demon Sadie Dupuis grew up between Connecticut and New York City under the reign of Biggie Smalls, Jay-Z, and Hot 97. If you listen closely, the influence of hip-hop and R&B is pretty apparent in Speedy’s music, intertwined with complex production and quick-witted wordplay. For whatever reason, though, this part of their genotype has been largely overlooked.

With the release of Twerp Verse, Speedy Ortiz’ latest LP, the band’s R&B influences are harder to ignore. The album is immune to categorization, with each track deftly pinballing from genre to genre. Even the enigmatic album title is a rap reference: As Dupuis has stated, “I call it a ‘twerp verse’ when a musician guests on a track and says something totally outlandish—like a Lil Wayne verse—but it becomes the most crucial part. This record is our own twerp verse, for those instances when you desperately need to stand up and show your teeth.”

Ahead of Speedy’s appearance at Riot Fest, we delved deeper into these influences with Sadie, waxing philosophical about Nicki Minaj, how Twerp Verse is the band’s moment to be bratty, and way, way more about Nicki Minaj.

RIOT FEST: What R&B and hip-hop did you listen to growing up? What drew you to it?

SADIE DUPUIS: I grew up in New York from the late ‘80s through the mid 2000s, so I liked a lot of the rappers from my city at that time. Biggie, Nas, and Jay-Z especially were rappers I heard on the radio as a kid—I remember watching Biggie’s funeral procession from the window of my third grade classroom because his service was held across the street.

My dad got me into a lot of indie rock, but my mom had worked at a label in the UK before I was born and played a lot of ska, reggae, and early punk for me as a kid. And even though I listened to a lot of top 40, she steered a lot of my taste. She’s from New Jersey, and we definitely thought the Fugees were the best band around 1996’s The Score, and then we of course obsessed over Lauryn Hill’s debut. She had the first few TLC CDs as well, which I stole and memorized.

I liked a lot of girl groups after TLC in pop and in R&B, like Destiny’s Child and Salt-N-Pepa and the Spice Girls. So when I started writing music, I always wanted, like, four vocal harmonies at once.

Speedy’s R&B and pop influences became more explicit with [2015 sophomore album] Foil Deer, and continue on Twerp Verse—was it a conscious decision to bring those influences to the forefront, or more of a natural progression? What triggered that change?

It was more a matter of having time to explore different sounds. On our first record, if I brought a demo to the band that was synth-oriented, we’d then play it in a basement 100 times on loud guitars; so by the time it got to the studio, it’d be a punk arrangement that was energetic but not especially nuanced.

On Foil Deer, we didn’t do too many of the songs live before tracking. So “Puffer” [from Foil Deer] for example, [was written] on a Korg and a drum machine, and the album version built on that. We were trying to do a Warpaint-meets-Dre thing. Or on “Mister Difficult” I could be, like, “let’s try to produce these vocals like Aaliyah.”

I know you’ve been a fan of Nicki Minaj; can you tell me about your relationship to her music? What drew you to it, what are your favorite tracks, et cetera?

I would guess the first Nicki I heard was “BedRock,” and then at some point everyone was doing “Super Bass” at karaoke. Speedy started right around the time Pink Friday was blowing up, and we’d listen to “Beez In The Trap,” like, every day we had to drive to a show.

I think it’s hard not to be drawn to her—she’s a very singular creative voice, able to work in just about any genre, mood, or aesthetic. My favorites are “Come on a Cone,” “Four Door Aventador,” “I Endorse These Strippers,” “High School,” and “Trini Dem Girls,” but I’m ultra psyched to hear whatever the new album brings.

If you could have Nicki do a remix of any Speedy Ortiz song, which would it be?

Oh my god, I don’t want her to waste her time on us! She has too many other important things to do.

Also, real quick: Was the line “I’m not bossy, I’m the boss” on “Raising the Skate” a little nod to Minaj’s “bossed-up” speech?

I was actually thinking of Kelis’ “Bossy,” one of the best singles by one of my favorite artists. I was listening to Kelis like every day in the months leading up to making Foil Deer—I got really into the Food album and it made me revisit her whole discography. And that line specifically was Beyoncé’s participation in the Ban Bossy campaign.

I think there are gestures I make lyrically that come from listening to rap. I tend to be pretty wordy, associational, discursive. I’m not big into repeating a hook, but I’m very into cramming as many ideas and jokes and twists into a song as possible… which makes it tricky onstage when I’m trying to play guitar too, but I have a lot of fun writing the words.

There’s a lot of anxiety and introspection that runs throughout your music, but there’s still a sense of bravado in a lot of Speedy songs—like in “Buck Me Off” on this album especially—that I think is kind of rare for a lot of indie rock—do you think that’s in any way the influence of the boldness of rap?

Sure. I think that’s been a thread throughout my music, using body humor for the purpose of braggadocio—“I’m getting my dick sucked on the regular” on “Fun,” or “They still wanna lick my asshole” on the [Dupuis’ solo project] Sad13 song “Hype.”

Twerp Verse’s title is a reference to, as you’ve said, the type of verse that someone like Lil Wayne would do, where his verse has nothing to with what the song he’s guesting on is about—what about the album conjured that idea for you?

I guess I view what Weezy does on a lot of songs—especially the guests where he obviously just spat it out in a second—as “taking a moment to be bratty,” which seemed like the right thing for us to do on an album when the world appeared to be falling apart and we were incredulous about it.

What is your favorite twerp verse of all time?

Similar to my Nicki question, but if you could have anybody do a twerp verse on a Speedy song, who would it be?

I feel like mainstream hip-hop and pop are starting to get more of the respect that they deserve within cool indie circles or whatever, but they’re still not really taken as seriously as art as they should be; why do you think that is?

I guess I don’t really see a lack of respect. In terms of critical cool for mainstream artists, like, Kendrick just won a Pulitzer—I don’t know if it gets more mainstream legit than that. Artists like Tyler, The Creator and Lizzo have long had history producing and collaborating with folks from the indie rock world. I don’t really see that as a new thing. I mean, growing up in New York, I was as aware of Sonic Youth as I was of the fact that they were fans of rap.

What seems to be progressing is white artists being more aware of their influences, of crediting and celebrating them and paying them properly, of self-interrogating their appropriative impulses, and of making space for more diversity in all genres of music.

Speedy Ortiz will be our favorite twerp verse of the hit song that is Riot Fest 2018, September 14-16 in Chicago’s Douglas Park. Tickets on sale now.