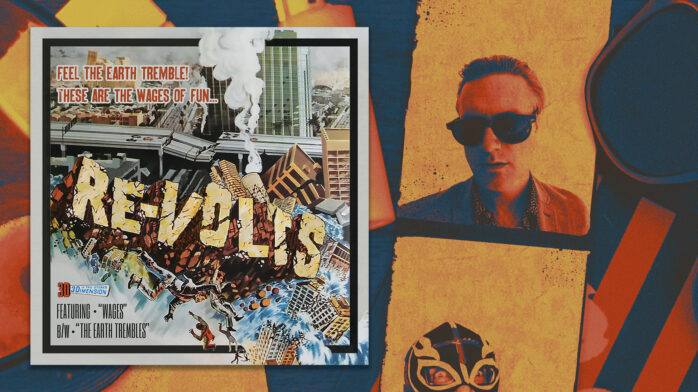 Check Out Spike Slawson’s Outsider Music Playlist, and the First New Song from the Re-Volts in 11 Years

Punk rock’s own Pony Boy, outsider Spike Slawson has seen and heard it all while criss-crossing the world with such outfits as the Swingin’ Utters (his 15 year stint with the band ended in 2012) and Me First and the Gimme Gimmes (he’s sung the songs in the stupor-group since its brilliant inception in 1995). Not often mentioned in the Slawson coversation, however, is the Re-Volts… and for good reason: the band he started with Jack Dalrymple (Dead to Me, One Man Army) is about as dormant as your average house cat.

That’s all about to change, however. Hot on the heels of the Re-Volts 2007 debut EP, the prolific band is back with a new two-song 7-inch, available this Friday, June 29 via Pirates Press Records. “Wages,” co-written by Slawson and the Dwarves’ Blag Dahlia, rips through side A, while “Earth Trembles” carries the the flip side. Riot Fest is proud to premiere “Wages” right here:

Additionally, since Riot Fest is comprised of misfits and outsiders, we asked Spike to curate a playlist of outsider music for us, and called him up last week to find out why he picked what he picked.

RIOT FEST: Tell us about the Re-Volts. When did this band of outsiders come about?

SPIKE SLAWSON: We’re definitely outsiders. I guess it came about in 2006; me and some friends, Jack [Dalrymple] among them, and another friend named Paul Scavuzzo. Darius [Koski] from The Swingin’ Utters contributed some guitar riffs and even a song to the first LP that we did then. Then we played shows and, you know, 11 years later we recorded a 7-inch. I think all bands should be that prolific.

I haven’t heard a bunch of these artists. I’ll just go down this list, and you tell me the first thing that comes to your mind.

To put the Kinks to an outsider compilation is interesting, because, you know, they’ve had some big hits.

Well, they sang to the to the outsider in all of us, even if they were in the mainstream. I think “I’m Not Like Everybody Else” is about weirdos. Kind of like David Bowie, who’s about as mainstream as you get.

I think there’s nothing not punk about the Kinks.

I would absolutely agree.

They did one of the best versions of “Mercy, Mercy.” I forget who did that original [version]; originally it was a soul song. They’ve got a lot of really great rock ‘n’ roll songs, and they seemed like they were good enough to be an R&B band. I really dig the Remains. They were on those Pebbles comps, and that’s where I discovered them.

Dean Carter, I think he’s Canadian. That’s from songs The Cramps taught us. That’s how a lot of people discovered him. It’s how I definitely did. A friend turned me onto him because of one of those columns that were about all these bands that were influential to The Cramps, like Dr. Demento, and all these weird old rock and roll oddities.

That’s a new band. I think they’re originally from Nashville, but now they’re saying they’re from Memphis… as you do, if you’re a trashy rock ‘n’ roll band. A lot of bands like that are really good sonically, but are lacking in the songwriting department… but I feel like Cheap Time have really good songs.

6. THE HOLLIES
“Look Through Any Window”

Another outsider of rock. They had a heyday for sure; but looking back in retrospect, to me, they feel like an outsider band. Something about the subtext of their words or their music puts them in that category for me.

Oh, definitely an outsider. I love his music, it’s one of those weird missing links between rock and pop. He’s an English guy, that rocks. And this song [came out when pogo] was emerging as a dance style.

That’s Howard Devoto’s band—the guy from Buzzcocks—great band. [Magazine was] a little more ambitious than the Buzzcocks; he even used some of the same riffs. I think you’ll recognize “I Hate Fast Cars” in “Boredom.”

I love the sound. That guy played, unapologetically, what people would call “bad.” And he did it for so long, and it was so good, that eventually it became good. He made “bad” good.

Kinda like the Ramones. Although I wouldn’t say the Ramones are bad at all…

No, but people called them bad! People said it was simple and rudimentary, but eventually time was a lot kinder to them than it was to fuckin’ Emerson, Lake & Palmer, you know?

To me, [Les Pirates was] a garage band before anybody was. This was like, early-‘60s, and they were out of tune and out of time…

…Before people even really had garages.

Right! Their sound is just, you know, it sounds like it was recorded in a gymnasium. It has this wild, savage kind of sound to it.

15. THE TURTLES
“Outside Chance”

“Outside” was in the title, so I had to include this one. They’re not necessarily outsiders.

I’d call them outsiders in the sense that they had a hit or two, and they’re amazing songs, but they didn’t really have the success of, say, the Beatles.

No, they have like one song that’s in commercials and part of your stream of consciousness. But they wrote a bunch of other songs outside of that that are rad.

Another Australian band, a surf band. There’s a lot of surf music from weird places that I never would have thought about, like Australia or Peru. They did the son “Bombora,” which is a really great song, and then [“Come On”] is just a weird rocker, which I think is anomalous for them; but it’s a really great song.

Should have been mainstream. In Germany, they went on some of those big shows and played their hits. They were the ones that wrote “Police On My Back.” by the Clash. “Baby Come Back” is a cross between rocksteady and glam. It’s weird, and could have only happened in England. It kinda represents England.

Then, sometime in the mid-‘80s, when the Cramps and the Gun Club entered the Australian consciousness, everything kinda changed. Shit got really weird and noisy, and the mid-‘80s they hit this weird stride with songs like “Swampland” and “When Fate Deals Its Mortal Blow.” Yeah, words fall short.

Another guy who should have been big but wasn’t; but everyone knows one or two of his songs. What qualifies him as an outsider to me is that he wound up defending this girl at a party and stabbed a dude to death, and ended up dying in jail under suspicious circumstances. So that’s kind of outsider.

I love that song. I don’t even know if it qualifies as a rock and roll song, but one of the things I love about that first record of his is that it’s got fuzzy guitars and beats that could be construed as rock ‘n’ roll beats, but then something else comes in entirely… like a different part of the world.