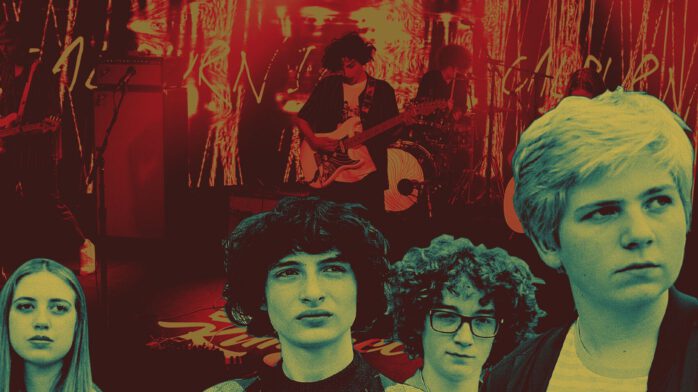 Calpurnia made its national television debut this Monday on Jimmy Kimmel Live! The group played “City Boy” and “Greyhound” from its new six-track debut EP, Scout.

Produced by Twin Peaks’ Cadien Lake James, Scout is available now on all download and streaming services (and perhaps in a record store or two), as well as directly from the band’s label, Royal Mountain Records.

In case you haven’t been keeping up, Calpurnia is a four-piece rock band from Vancouver, British Columbia, led by Finn Wolfhard—better known as Stranger Things‘ young protagonist, Mike Wheeler, and Richie Tozier in last year’s remake of Stephen King’s It. Wolfhard met drummer Malcolm Craig on the set of a video shoot, and the two hit it off immediately. Guitarist Ayla Tesler-Mabe and bassist Jack Anderson soon filled out the rest of the band; they then thought of a unique name, got a slot at Riot Fest 2018… and now here we are.

You can watch the Jimmy Kimmel Live! performance below, and see them at Riot Fest in September.

Speaking to NME recently, Finn Wolfhard said he wants to keep the band separate from Stranger Things, but sometimes fans of the show can be a little bothersome sometimes.

“Most of the fans of Calpurnia are Stranger Things fans, which is not a big deal at all. They’re super loyal and incredible, and really do like the music. It’s the people who aren’t fans of the music and are just there because of Stranger Things that really bother me,” says Wolfhard.

“I got one at Toronto and shut them down super hard—in a nice way. They said something like, ‘I love Stranger Things’ and I was like, ‘Cool man, I also like music, which is what’s happening right now.’”