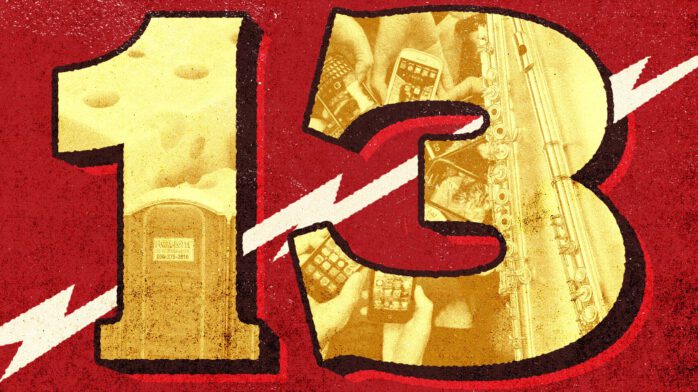 Have No Fear, A List of 13 Phobias is Here for Friday the 13th

1. Turophobia is the fear of cheese. That means no Swiss, nor bleu, nor feta, nor brie, nor havarti, nor mozzarella, nor Monterey Jack, nor camembert, nor American, nor toe, nor provolone, nor Cheddar. No cottage cheese, even.

2. Ephebiphobia is the fear of teenagers or adolescents, or more technically, the “inaccurate, exaggerated and sensational characterization of young people.” Symptoms include the need for young people to not be on your lawn, and the sudden urge to tell them how things were back in your day.

3. Do you have Melissophobia? You’ll want to stay away from bees, as well as the end of the film My Girl.

4. Are you scared of rain? You might have Ombrophobia. Make sure to bring a poncho to Riot Fest.

5. Many people at Riot Fest suffer from Nomophobia, or the irrational fear of being unable to use a mobile phone for whatever reason; whether you’ve lost it, you can’t get a signal, and so on. How terrifying is it to be at a concert and not be able to tweet about it?! And boy, it’d be really scary to give the person behind you a good experience by refraining from filming a shitty video on your Sidekick, no?

6. Pogonophobia is the fear of beards. You won’t find any of those at Riot Fest. We’re a beard free zone.

7. Do you hate music? You might have Musicophobia, which is the fear of music. You poor bastard.

8. Do you like open spaces or being in crowded, public places like music festivals? Then you probably do not suffer from Agoraphobia.

10. Who doesn’t love clowns? People with Coulrophobia, that’s who. Everybody else loves clowns. Everybody.

12. Phobophobia is the fear of fear. Not to be confused with Morebeeraphobia, which is an irrational fear of the band FEAR.

13. Find yourself with a “pervasive apprehension that others might be having rewarding experiences from which [you] are absent?” Then you might have the FOMO, or Fear Of Missing Out. This crippling disorder is entirely curable, though. Fix that FOMO by getting your Riot Fest tickets now.