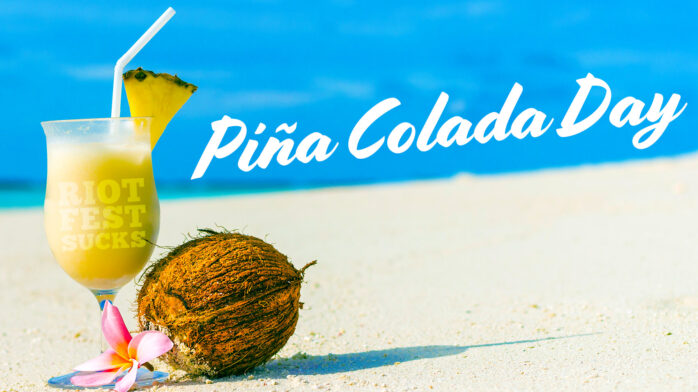 If You Like Piña Coladas, and Going to Riot Fest…

Do you like Piña Coladas? Getting caught in the rain? If you’re not into yoga, if you have half a brain, and if you like making love at midnight in porta potties at the cape, then I’m the music festival that you’ve looked for, buy Riot Fest tickets and escape. That’s right, it’s Piña Colada Day.

What does punk rock music have to do with a delicious Puerto Rican cocktail of rum, pineapple juice, and cream of coconut? A lot more than you think, both are delicious, both used to be really popular but now are mostly consumed by your parents, I’ve almost died because of both of them, they both peaked in 1978, and both Piña Coladas and punk rock music are claimed to be invented by multiple different people.

Ramón “Monchito” Marrero Perez, bartender at Caribe Hilton in San Juan, Puerto Rico, is mostly widely recognized as the inventor of the Piña Colada. He claims to have created the drink on August 16, 1954 using the recently released Coco López cream of coconut, but it could be anytime between 1952 and 1957.

But another bartender at the Caribe Hilton, Ricardo García, claims he also invented the drink in 1954 during the coconut cutters’s strike.

And then here comes Ramón Portas Mingot almost a decade later in 1963 and said he invented the drink while working at the Barrachina Restaurant in Old San Juan.

Or it could have been invented by Puerto Rican pirate Roberto Cofresi 19th-century as a drink of white rum, pineapple juice and coconut milk that he gave to his men as a morale booster.

Whoever invented the Piña Colada, we thank you. In 1978 it became the national drink of Puerto Rico.