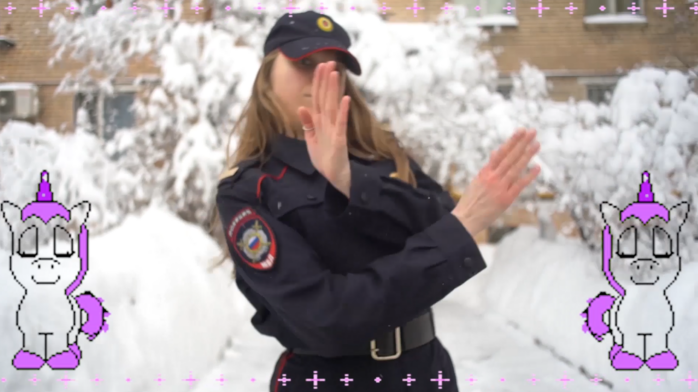 This past Sunday, as the final World Cup match between France and Croatia entered its fifty-second minute, four members of the Russian art collective Pussy Riot ran onto the pitch dressed in police uniforms. Unlike most disruptions at sporting events, this one was backed by causes both artistic and political: To bring attention to the ongoing free speech crackdown by Russian authorities, including criminalizing “likes” on social media posts with an anti-establishment message. The actual cops were predictably displeased with the action, and the four members are currently in jail, serving out 15-day sentences for their protest.

So with the eyes of the world focused on these masterful multimedia protesters, they’ve just dropped a new single, “Track About Good Cop”. The electropop beat may say “weekend at the club”, but the message is all about taking it to the streets.

In a statement, the group writes, “This track is a utopian dream about alternative political reality in which instead of arresting activists and putting them in jail cops are joining activists. The world where cops got rid of homophobia, stopped the war on drugs and actually understood that it’s much better to be joyful and nice to people.”