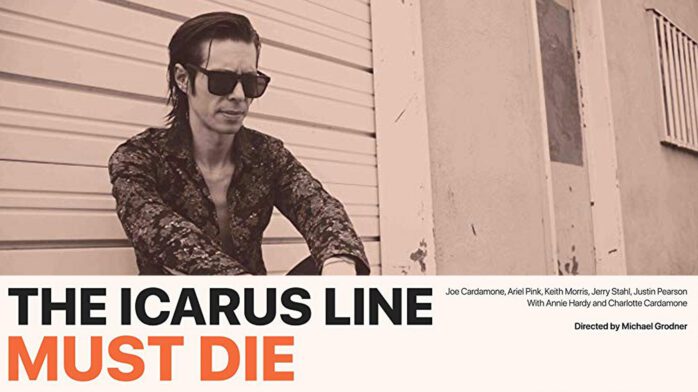 You Must See ‘The Icarus Line Must Die’

The post-hardcore scene in Los Angeles during the early-2000s contained some of the final gasps from the old guard of the rock ‘n’ roll machine. Everything’s changed in today’s digital era, but many of those artists are still active, still making and performing great music, and still trying to somehow just make it all work. The Icarus Line embodies this in a new film, ominously titled The Icarus Line Must Die. Here we see the creative result of the band’s charismatic frontman, Joe Cardamone, collaborate with filmmaker Michael Grodner… and the sum is far greater than its parts.

“We had talked about working together,” says Grodner of his collaboration with Cardamone. “I thought when I wanted make this film, that he’d be the perfect subject, or a perfect center for a film. I thought, you know, we can make a movie, we can use a lot of great music performance, it can be like a rock ‘n’ roll film. In a sense we haven’t seen a lot of movies like that recently. I pitched it to Joe, because I always thought he was a compelling figure, he’s a great frontman—one of the best frontmen I’ve ever seen—and it just seemed to be the right move for him at the time too.”

The real band the Icarus Line is well known for its destructive behavior, but right from the opening of the movie I was shocked at how down to earth, and (dare I say it) responsible Cardamone’s character is. He is a hustler, an artist and a business person dealing thoughtfully with realistic relationships. I was not expecting him to come off as earnest and likeable as he did. There’s a theme of growing up here: In The Icarus Line Must Die, punk’s not dead… it just has bills to pay.

I asked the real Joe Cardamone which of his public personas square up more with reality.

“I guess like anyone, we’re all dynamic beings.” quipped Cardamone. “Both sides of the coin are good representations: The home life, and the life away from home can be very different because you’re just thrown into situations that cause you to react [out on the road]. So to make a long answer short… both things are true.”

Speaking of punk, legendary frontman Keith Morris (Circle Jerks, Black Flag, OFF!) pops up as himself in the picture, adding some gratuitous street cred. I say gratuitous, because the film earns its credibility on its own without any cameos. However, I loved seeing Keith and hearing him lament on turning 60 and embarking on a book tour. In fact, many LA scenesters and underground artists appear and perform in the film—including Ariel Pink, Pearl Charles, Melissa Brooks (The Aquadolls), Justin Pearson (Retox, the Locust), Rafael Reyes (Prayers) and writer Jerry Stahl (Permanent Midnight, ALF)—alongside performances by Pink Mountaintops, Together Pangea, the aforementioned Retox, Obliterations, and Annie Hardy of Giant Drag. In the end, when the other shoe finally drops in this slow burn of a story, you will see how punk this collaboration truly is.

With this, his first feature, filmmaker Grodner is admittedly influenced by the late-’70s -early-’80s no wave cinema from New York City, but The Icarus Line Must Die is very LA… and that is what sets it apart. While it’s fair to call it a loosely-scripted series of vignettes based on actual events, there’s a dark through-line of texted death threats to Joe that gives this a wonderful noir mystery feel. Who did Joe piss off, and are these threats to be taken seriously? Why does he keep ducking calls from the manager of the Cult? I was hooked on trying to solve the puzzle.

The pressures and stress of everyday life are mounting for Cardamone, and the viewer is taken into his psyche via some nightmare sequences that have us questioning whether or not he’s coming apart at the seams. Add to this the stylistic choice of black and white cinematography and some amazing driving shots (classic LA noir), and this is one detective away from being a hard-boiled thriller (meanwhile, I was expecting a rock biopic…. which it also sort of is).

Knowing that much of the film is taken from actual experiences from Joe Cardamone’s life, I asked what the was the most difficult thing about playing, essentially, his real self.

“At the end of the day, it was all a little more exposing than I am comfortable with,” Joe said. “The thing that got me through it was: I’ve been in the music scene here in Los Angeles for a long time, I produce a lot of records for people, and I see their lives… and at a certain point I realized what I was doing was making a movie about all of us. That helped really tune my perspective on it, and took it away from me. [This] made the whole thing kind of work in my mind.”

This movie is mysterious and honest, LA and NYC, brash and mature. It’s punk rock for grown-ups. It’ll leave you with a deeper knowledge of—and thirst for—underground music, and Joe Cardamone in particular. The Icarus Line Must Die is worth your time.

Dark Star Pictures is sporadically rolling out The Icarus Line Must Die to theaters throughout the summer.  The film is currently available on digital platforms such as iTunes, Amazon, Vudu, Google Play, Fandango Now, Xbox and so on. 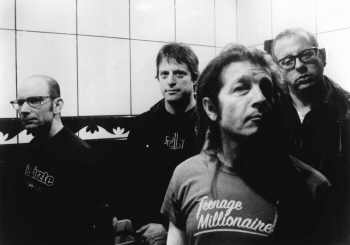