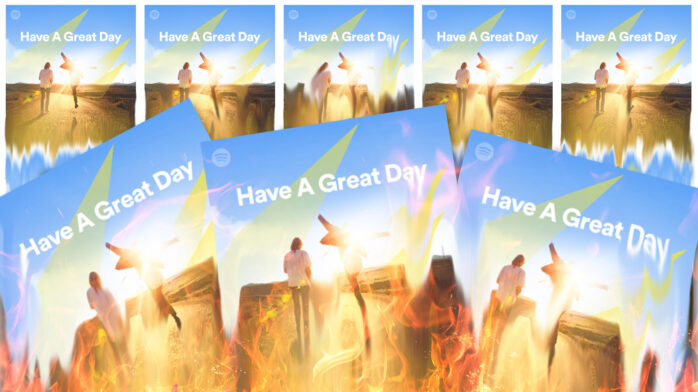 I Listened to All Six Hours of Spotify’s ‘Have A Great Day!’ Playlist and Had A Terrible Day

Bad moods are inevitable. With the soul-sucking work week dread that comes on Sundays, or the general pointlessness of Tuesdays, nothing tops the bummer factories that are Mondays. It’s the beginning of the work week, emails are flooding in, and the sweet memories of the weekend are fading into Slack notifications and Google Calendar invites. Plus, it’s 2018, so if you’re not spending every waking moment at least slightly pissed off about something, you’re weirding everyone else out. This Monday was no exception: from the hour I woke up, I was already ready for the weekend.

To fix this, I decided to queue up Spotify and listen to its six-hour “Have A Great Day!” playlist. According to Spotify, the playlist is part of its editorial arm, representing thousands of curated mixes that are “the result of finding the perfect balance between an expert’s music knowledge and data about Spotify listeners.” With the playlist’s slogan offering the promise to “feel great with these timelessly fun songs,” I worried that I’d be hopeless if algorithms and “music experts and genre specialists from around the globe” could make me not feel like garbage. I wasn’t wrong. Here’s what happened when I shoveled six hours of peppy, relentlessly optimistic songs in one sitting on a crappy Monday morning.

With a fresh pot of coffee, a bad mood, and six hours to kill, I settle in for what I hope to be an intravenous infusion of positive vibes and algorithmic bliss. “Have A Great Day!” kicks off with one of the most deservedly ubiquitous songs of all time: the Jackson 5’s “I Want You Back,” aka the popular wedding song that also begins with the line, “When I had you to myself, I didn’t want you around.” With bonafide classics like the Beatles’ “Here Comes The Sun” and Hall and Oates’ “You Make My Dreams,” the first hour is pretty pleasant. As I’m feeling better from the morning as my coffee finally kicks in, I think about how many movies have featured Rusted Roots’ “Send Me On My Way Home.” I also wonder how precisely the lead singer sounds like Bono trying to do a David Byrne-impression over a Dave Matthews Band track. It’s something else. Later, I remember the summer everyone was listening to that one Edward Sharpe and the Magnetic Zeros song.

After an hour in, I check my email to remind myself how much Riot Fest is paying me to do this. I regret that there’s five more hours of this, and consider just how much I’m willing to do for a check. Thankfully, there are some jammers on here: Natalie Cole, The Temptations. Otis Redding, David Bowie and Queen, The Bee Gees, Stevie Wonder, and Dexys Midnight Runners, all in a row. And then who does Spotify follow-up all that high-energy pop and soul with? Fedora aficionado Jason Mraz’s “I’m Yours,” a song so saccharine that if some jamoke with an acoustic guitar plays it at a party, you’ll be practically begging him to bust out “Wonderwall.” A few songs later, Bobby McFerrin’s “Don’t Worry Be Happy” comes on. I do not take his advice.  My speaker stands begin to look like towers of impending doom akin to the Eye of Sauron.

Hour three is the sonic equivalent of coming to in the middle of a blackout drinking bender. Several classics appear on this mix, like OutKast’s “Hey Ya!” (another song about failed relationships I always hear at weddings) and a-ha’s “Take On Me.” I do not remember much about this hour. Spotify tells me that 3,063,556 people are subscribed to this playlist, making it one of the more popular playlists on the website. I think about who these people are, and if they’re idiots like me going through six consecutive hours of this music. I’m sure there are people who listen to this playlist all the way through every day. I do not know whether to admire or fear them.

I put on headphones and grab lunch. As I order my sandwich, Elvis Presley’s “Hound Dog” blares in my ear holes. I think about this recent @dril tweet:

I realize that I am that literally guy right now, but for Riot Fest. Coming back home four and a half hours in, the playlist goes from Macklemore’s “Can’t Hold Us” to Elton John’s “Rocket Man” to Fountains of Wayne’s “Stacy’s Mom” to Elton John’s “Bennie and the Jets.” I conclude that the algorithm is mocking me. There is no other explanation. I keep the headphones on, wanting nothing more than to go back to bed and curl up in the fetal position.

I consider telling my editor there’s been a death in my family to get out of this assignment. Though Matt and Kim’s breakout single “Daylight” brought back memories of 2009, and Simon and Garfunkel’s “Cecilia” is one of my all-time favorite songs, the constant barrage of sonic smiles makes me want to pack up my Chicago apartment and move inside an Elliott Smith LP permanently. Browsing other curated playlists in Spotify’s Mood tab, there are several playlists called “Good Vibes” or “Happy Hits” or “Songs To Sing In The Car.” All the models on the playlists’ cover images seem so happy. I am not happy. I click on another playlist called “Mood Booster” and find the first song is a recent Maroon 5 single. It could always be worse. I’m lucky, actually.

The coffee has faded. It’s roughly three in the afternoon—way too early for a beer, but if one more consecutive major key song comes through, I might make an exception. The thing about this playlist is that it consists of so many individually great songs. Who doesn’t love the Beach Boys’ “Good Vibrations” or the Who’s “Baba O’Riley”? But taken all together, without any breaks or mood changes “Have A Great Day!” is overwhelming. It’s basically brain freeze, but for over six hours. Remember how much of a goober John Cusack’s character was in High Fidelity? Remember when he said, “Did I listen to pop music because I was miserable? Or was I miserable because I listened to pop music?” and we all groaned at his pretentious shit? Well, I am sorry to report that he was onto something. It’s the latter. Pop music definitely made me miserable.