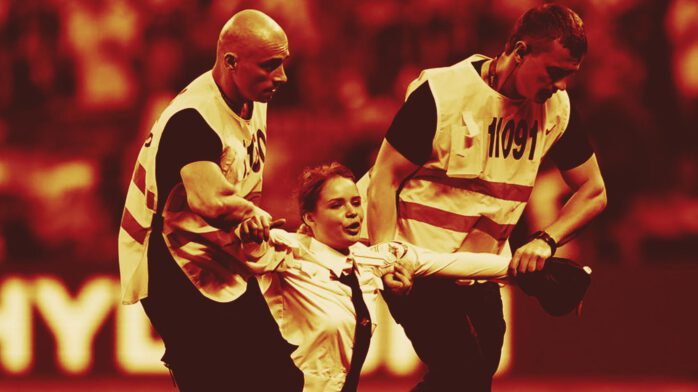 Pussy Riot Gets Out of Jail, Immediately Re-Arrested, Then Released Yet Again

It seems Vladimir is picking on girls again. After four of our favorite Russian ruble-rousers stormed the field during the 52nd minute of the World Cup Final on July 15 in protest of Putin’s hideous policies, four members of Pussy Riot were jailed, then released, then detained again… and finally, freed again the next day.

Dressed in old-fashioned police uniforms, three female and one male Pussy Rioter ran out onto the field during the game with Russian officials in hot pursuit. The protest quickly turned into a short, spirited game of tag between the scattering protesters and officials, with one player even high-fiving a protester. The fun came to a quick end after two minutes, as band members were nabbed by officials one by one, dragged from the field, and immediately detained.

After some classic Russian-style due process (read: there was not a fair trial), Veronika  Nikulshina, Olga Kuracheva, Olga Pakhtusova, and Pyotr Verzilov were sentenced with the shameful act of “the organization and holding of public events without prior written notice,” and found themselves in the Gulag facing 15 days of detainment, and a three year ban from sporting events (thankfully, Riot Fest is not considered a sporting event).

Just after rushing the field, Pussy Riot claimed responsibility for the event through a single tweet. Citing Russian poet Dmitriy Prigov’s images of heavenly and earthly policemen as inspiration, they listed some more-than-reasonable demands for Russian Federation President Vladimir Putin, ranging from halting illegal arrests at rallies to ending the fabrication of criminal accusations. Putin, the world’s foremost expert in putting the “dic” in dictator, didn’t appreciate the tweet and detained the four members again, immediately after they were released from their fifteen day sentence. Naturally, they spent their time in the pokey singing songs of freedom and laughing, and were thankfully released once again yesterday.

To recap, we’ve put together this handy Pussy Riot timeline for you:

Don’t be a pussy! Support human rights in style by buying cool swag from the Pussian Federation here. Free Pussy!

Smash the state in your own little way by buying tickets to Riot Fest 2018, September 14-16 in Chicago’s beautiful, non-authoritarian Douglas Park. Tickets on sale now.