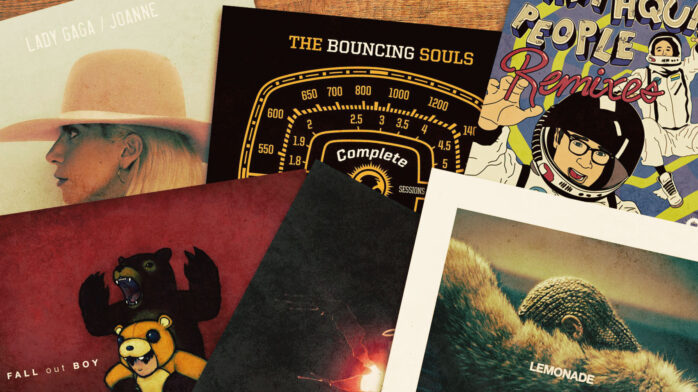 Musicians are a promiscuous bunch, and not just in naughty ways they’re commonly known for (but yeah, I guess, those ways too). From cameo features to remixes to collaborative projects that occasionally outshine their main gigs, there’s a certain kind of artist that thrives on hooking up with different creative partners.

The performers at this year’s Riot Fest are a creatively profligate bunch with a knack for getting outside their comfort zones to team up with musicians from across every corner of the musical landscape. Here are ten of the best—and most surprising—times that’s happened.

Elvis Costello is one of the most enthusiastic collaborators on this year’s Riot Fest bill. Over the years, he’s made records with everyone from Billie Joe Armstrong to the Brodsky Quartet. He not only recorded an album with easy listening superstar Burt Bacharach, but also contributed to guitarist Bill Frisell’s tribute to the Costello/Bacharach catalog.

In 2008, he slid into the back half of Fall Out Boy’s “What a Catch, Donnie” adding “bombastic post-emo pop ballad” to a long list of styles lucky enough to feel his golden touch.

Beyonce’s Lemonade standout “Hold Up” was already a pileup of indie rock icons—with Vampire Weekend front man Ezra Koenig interpolating the Yeah Yeah Yeah’s “Maps” on the hook—before it somehow made its way to Josh Tillman, aka Father John Misty. He added the first verse and the “jealous and crazy” refrain, leaving the fingerprints of a tripped-out folk-pop provocateur on one of the decade’s biggest self-empowerment anthems.

Beck’s dipped his toes in a legendarily broad range of sounds over the course of his career, and worked with just as diverse a collection of artists—from the Chemical Brothers to Brazilian troubadour Seu Jorge.

Even after several decades of surprising collaborations, it still was unexpected to find him in the credits of Lady Gaga’s rootsy, country-inflected Joanne for his contribution to the funky cut, “Dancin’ In Circles.”

Def Jux guru and future Run the Jewels co-founder El-P brought together a massive collection of talent for his 2007 classic I’ll Sleep When You’re Dead, including indie rap royalty like Atmosphere frontman Slug.

Less expected was an appearance by Chan Marshall, whose hushed work with Cat Power stands in stark contrast to her verse on the chaotic cut “Poisenville Kids No Wins.”

The Ramones were in a turbulent phase of their career when they recorded 1987’s Halfway to Sanity, and while the album has its issues, it also has some gleaming high points, like getting Joey Ramone and Debbie Harry together for the bubblegum thrash of “Go Lil’ Camaro Go.”

This also happens to be right around the time Blondie drummer Clem Burke filled in behind the kit as Elvis Ramone, following Richie Ramone’s sudden departure.

BLEACHERSTaylor Swift
“Look What You Made Me Do” (2017)

Like Father John Misty, Bleachers mastermind Jack Antonoff has also found a lucrative side hustle penning music for some of the biggest pop stars in the world. Taylor Swift is one of his biggest fans. After contributing to her massive album 1989, he returned for last year’s Retribution and its surly single “Look What You Made Me Do.”

Gary Numan’s massive influence on electronic music is reflected in the huge number of high-profile fans who’ve invited him into the studio. One of the most adventurous collaborations was with avant-rock outfit Battles, who let him take lead on the electro-psychedelic meltdown “My Machine.”

It was weird enough that EDM cornball Steve Aoki would corral Weezer frontman Rivers Cuomo into sing-rapping his 2012 single “Earthquakey People.” But bringing in Andrew W.K. to transform the result into old school head banging, canned-beer-spewing thrash metal elevated the endeavor from questionable to epically chaotic.

Matt Skiba sitting in with Bouncing Souls for a Misfits cover really hits a Riot Fest trifecta of some kind. With an arrangement that digs into the song’s debt to classic doo-wop and an unexpectedly disarming vocal performance, the Trio’s rendition of “Hybrid Moments” goes welcomingly deep.