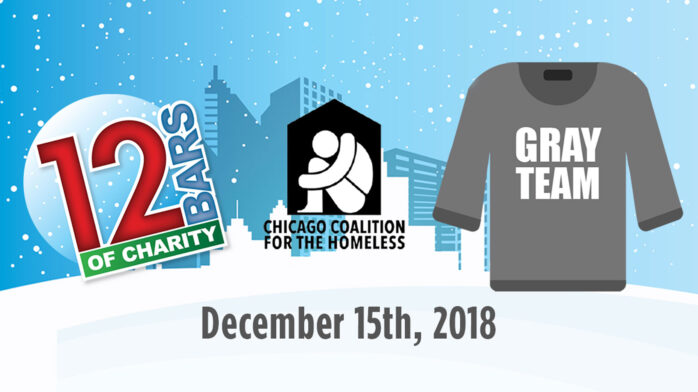 Join Chicago Coalition for the Homeless for 12 Bars of Charity

On Saturday, December 15th, join eight of Chicago’s favorite non-profits in the 12 Bars of Charity, a bar crawl that rings in the holiday season and gives back to the Chicago community. Bars and restaurants in the West Loop area are hosting 12 Bars of Charity for their premiere event. “This is our first year in Chicago, and we look forward to having a very successful turnout,” said Bobby Conn, President of One80 Entertainment.

Encompassing the age-old phrase, “The more the merrier,” 12 Bars of Charity invites anyone 21 or older to join in the bar crawl, with $10 from each ticket going to the participating charity of their choice. Non-profits included in the event are Cradles to Crayons, Chicago PAWS, Autism Speaks, Chicago Coalition for the Homeless, Best Buddies Illinois, Junior Council – Lurie Children’s Hospital of Chicago, Bear Necessities Pediatric Cancer Foundation and Gilda’s Club Chicago

Michael Nameche, one of the Directors of the Chicago Coalition for the Homeless, stated, “Matching your social time with friends to a good cause is always a winning idea.  We were thrilled to join this event alongside so many other great non-profits.  We are stronger together!”

Participating West Loop bars include West End, The CrossRoads Bar & Grill, Mad Social, Cruz Blanca, Federales, Emporium Fulton Market, Paddy O’Fegan’s Irish Pub & Restaurant, Green Street Local and New Line Tavern. Event check-in will run from 12:00PM to 4:00PM at Green Street Local located at 130 S Green St, Chicago, IL 60607. Signing up for the event is as simple as visiting the 12 Bars of Charity Chicago website at www.12barsofcharity.com/chicago. After reaching the website, participants can scroll through the teams and choose their charity. Tickets are $30 plus tax and fees, and include drink specials, shuttle pass, and long-sleeved shirt representing each non-profit team. The best benefit of all, however, is the feeling of helping charities serve those in need this holiday season.