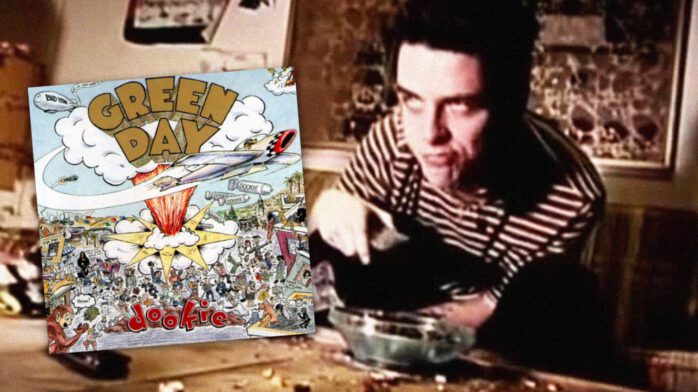 Do You Have The Time To Read About the Anniversary of Green Day’s Dookie?

Dookie came out 25 years ago this month. Yours truly was 17, and like most 17-year-olds without a Cool Older Bro to tell me what was good, I learned about what was “good” from MTV and alt-radio. Nine Inch Nails might as well have invented industrial music, Nirvana the distortion pedal. Sure, Ramones, Sex Pistols and the Clash had their share of staples on classic rock stations, but without the help of (the then-almost cool) Spin and Rolling Stone, I and many other suburban schmoes would never have known that Epitaph, Fat Wreck Chords and Lookout! were about to take punk (specifically pop-punk) mainstream. And like it or not, they could only do so piggybacking the third album from a Bay Area trio backed by the bulging delts of Reprise Records.

Try to remember the first time you heard Green Day. Dookie, that is. (If you’re some crusty old bastard who saw them at Gilman before they were personae non gratae, chill; we already know you’re cooler than us.) “Basket Case” (boasting a video that, were it released today, would surely be deemed a problematic depiction of mental health facilities) was the mega-smash, but you may recall that “Longview” was the first single. Whether you’re 17 or 47, single AF, merrily swiping right or long-long-hitched, I defy you to submit a more relatable lyric than “when masturbation’s lost its fun, you’re fucking lonely.” Billie Joe Armstrong’s universal truth laid the bridge from Mike Dirnt’s loopy, LSD-influenced bass lead to a tooth-rotting eruption of candy corn bar chords. (Pro tip: When you’re learning guitar, do not attempt to emulate Billie Joe’s strumming style from this era; you’ll break every string and slit every knuckle in half.) That chorus all by itself sold Dookie’s first million, of an eventual 10.

Wayne’s World had come out out two years earlier, introducing an impressionable recently post-pubescent generation to the concept of cranking up your favorite record in a car and going apeshit with your buddies. Wayne, Garth, their two pals and good ol’ “Partied Out” Phil were all adults, granted, but what do high school kids in the sticks have to do besides drive nowhere and blast their jams? And all those young bohemians could certainly rhapsodize (read: catch a mosh in the backseat) to the entirety of Dookie. Is there a single lull? Even the comparatively mid-tempo “When I Come Around” is sequenced perfectly as what passes for a breather before maybe-maybe-not-coming-out anthem “Coming Clean” rekindles the fuse. The moms and dads who wouldn’t give Green Day the time of day until they went adult contemporary with “Good Riddance (Time of Your Life)” surely wondered more than once why their Honda Civic’s upholstery was in shambles on the drive to work the next day.

Things only got more out of control in the summer of ’94. In August, Green Day tried to one-up NIN at Woodstock by firing clumps of rancid mud back at their fans (or, as Billie Joe eloquently dubbed them in the moment, “rich motherfuckers”). Just a month later, the trio treated my homebase of northeast Ohio to a $5 “back-to-school” amphitheater show. And be it Woodstock’s estimated 550,000 fans or the Blossom Music Center’s still daunting 23,000, the then-early-twentysomethings kept it real AF. If you count “Welcome to Paradise” as a Kerplunk song (and you should, although Dookie’s re-recording wipes the floor with it), just half of their 14 songs were from Dookie. It felt like 100% of my senior class (and 100% of every senior class in the fucking state) were on the lawn, uprooting sod to gun at one another, gamely trying to recapture that instantly iconic PPV magic. My main takeaways while steam-pressed against a barrier ill-equipped to keep the riff-raff from rushing the pavilion: 1) I wish guys in Browns jerseys would stop skanking to the Operation Ivy cover; 2) I wouldn’t mind if the interval of taking Docs to the back of the skull increased from two seconds to, say, five; and 3) I can’t think of anywhere on the planet I’d rather be.

And then the switch flipped.

Upon returning for one last shitty year of high school, my friends and I were shocked to learn that, this whole time, other punk bands existed. (Yes, that was the first time yours truly heard of the then-seven-year-old Op Ivy.) Not only during, but before Green Day’s meteoric ascent. And our interest was piqued. Hey, there were only 14 songs on Dookie, 12 on Kerplunk (this particular genre’s Bleach) and, meh, all that not-produced-on-steroids stuff on Lookout!’s handy 1,039/Smoothed Out Slappy Hours comp. While Green Day were taking their well-earned victory lap, it was time for us to explore the realm of “similar-sounding artists.” And yeah, in pop-punk, that’s a deeeep fucking well.

Wolves, out you come. A veritable sweepstakes erupted, as not only did the Offspring, Rancid, NOFX, Bad Religion, All, Less Than Jake and countless contemporaries begin to infiltrate MTV and alt-radio (to varying levels of success), but a fundamental question loomed over each before one could determine if they actually, y’know, liked the band: Were they going to sign to a major?

Younger listeners like myself were already familiar with this quandary, having experienced the rapid rise of radio-friendly, unit-shifting grunge just a few years before (this explosion was often hailed as a corrective to the bloated hair metal ’80s), yet we were complicit with journos and tastemakers for intensifying the heat lamp on any up-and-coming punk band hailing from a respected indie label. While some of the aforementioned took the leap to the big leagues and some retreated to the comforts of home, all were sparkly new guinea pigs for the mainstream to fret and piss and moan about.

Green Day, though, were well outside of that conversation. They had already sold out. Just ask MMR.

Conveniently forgetting that whatever career path the band chose, it resulted in how us red-staters wound up hearing them in the first place, teens began to shrug off Green Day. It didn’t help that they were at peak oversaturation. While the boys took justasec from the madness to conceive (the highly underrated) 1995 follow-up Insomniac, the Warped Tour was in its infancy, giving voice to hordes of smaller, idiosyncratic punkers romantically roughing it in the van. Green Day? That was for jocks and normies. Remember that little dig in High Fidelity (not ’til 2000, but still) where Todd Louiso plays Stiff Little Fingers in Championship Vinyl upon mansplainin’ to Sarah Gilbert that Green Day were influenced by them? The soon-to-be couple share a patronizing chuckle when some rando customer wonders aloud, “Is this the new Green Day?” It begs the question: Were we making fun of the dreaded “other,” or simply an earlier version of ourselves?

A quarter-century later, it’s so much more fun to enjoy Dookie for what it contained, rather than what it represented. Armstrong, Dirnt and drummer Tre Cool have gotten seriously ambitious since: power ballads, punk rock operas, Broadway musicals, taking on the formerly lamest POTUS, staggering the release of what basically amounted to a triple album. Your mileage may vary on that evolution, but I bet your pleasure receptors fire like a motherfucker whenever a Dookie track comes on the ol’ FM/jukebox/paid streaming platform. Hell, mine are this very moment just from concluding a serious, contemplative retrospective on the merits of an album called Dookie.