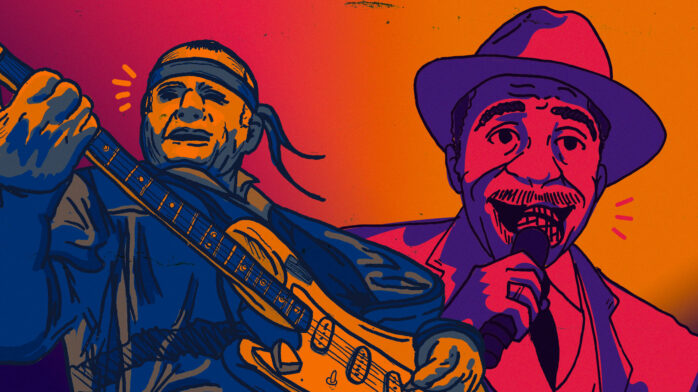 According to the cliche, the most rock ‘n’ roll think you can do is to live fast, die young, and leave a beautiful corpse, but we also know that most reasonable persons don’t shoot for that trajectory on purpose. If one can live a long life—especially if one can do that as a person of some means and notoriety—most would choose to do so; for every Kurt, Janis, or Jimi, there are hundreds of perfectly reputable rock ‘n’ rollers who chose life, and very few of them are less emblematic for that fact.

As Riot Fest readers have likely heard, we lost two legends this week who lived long, wild lives as rock ‘n’ roll behemoths: “King of the Surf Guitar” Dick Dale, who died on March 16 at the age of 81, and R&B dynamo Andre “Mr. Rhythm” Williams, who we lost the following day at 82. Though both of these men made very different contributions to the music, they share the distinction of being singular earth-shakers. The influence of both has been felt on rock writ large, but this being a punk-centric place, we’re going to focus for a moment on their impact on that part of the musical universe.

Dick Dale was born and raised in Massachusetts, but will forever be associated with his adopted home of California. It was there that, at the dawn of the 1960s, Dale adapted Middle Eastern musical scales for electric guitar, cranked the reverb tank on his signature Fender Strat/Fender Showman combo, and stomped ballrooms full of crazed surfer teens into submission. To drown out the screaming crowds, Dale had collaborated with Leo Fender himself to create the first 100-watt amp; less than a decade later, the massive, wave-crashing sound generated by all that power would mutate into heavy metal, but Dale was there first.

Nearly two decades before The Ramones and their ilk codified “keep it simple, stupid” into the ethos for a movement, Dale was a true believer: his music relied on speed and volume to pummel listeners, while not giving a solitary rat’s ass about virtuosity. Talking with The Las Vegas Sun in 1995 after his dome-searing take on the traditional Greek song “Miserlou” was featured in the unforgettable opening credits to Pulp Fiction—thus giving his career a forceful second wind—Dale towed the punk line better than Johnny Thunders. “The average person doesn’t know what an augmented ninth is, and neither do I, and I don’t give a shit! I can’t even play the scale, and that’s that!”

That bad attitude wasn’t the only thing Dale bequeathed to the punks. Having more or less invented surf music, Dale’s beach-burnt sound had a clear impact on the Ramones, and his reverb addiction (along with that of his southern cousin-in-distortion, Link Wray) had an immeasurable impact on the Cramps. SoCal skate punk legends Agent Orange owe perhaps the greatest debt to Dale of any major band, their guitar sound being a straight 1980s update on the classic Dale sound.

Dale was also very workmanlike in a fashion that would make punk lifers like Mike Watt proud. Once he started a serious tour schedule in the mid-1990s, he never stopped (though sadly, this was partly because he desperately needed the income to keep his diabetes and rectal cancer at bay), and he rarely turned in less than a ripper.

If Dick Dale prefigured the work ethic of hardcore, Andre Williams’ influence hemmed closer to the wasted cool of Richard Hell and Iggy Pop. After moving to Detroit from Alabama in the 1950s, Williams befriended Jack and Devora Brown, owners of the label and studio Fortune Records. In many ways, Fortune was an early punk label: it was operated out of the back of a barber shop, and their records were usually recorded on the cheap, scrappy and bone raw. Though Williams would later work under more amenable conditions, he thrived in these early days, with his Fortune sessions garnering a hit with “Bacon Fat.” He also wrote a few hits for other artists in this time period, including the immortal “Shake A Tail Feather” for The Five Du-Tones and “Twine Time” for Alvin Cash & The Crawlers.

From day one, Williams got by more on the strength of his personality than that of his voice. Most of his songs were more spoken or shouted than sung, spat out over nasty R&B grooves. This approach has garnered him a reputation as a forerunner of rap, but honestly, that’s a bit of a stretch; Williams was far from the first to talk over music, and his leering vocal style doesn’t really feel like rap. Still, his willingness to get down in the dirt with songs like “Jail Bait” and “Greasy Chicken” certainly puts him somewhere in both the punk and rap lineage. The Cramps, yet again, were early and ardent fans, working a cover of “Bacon Fat” into their repertoire; most any Detroit punk band worth their salt recognized Williams as part of their roots.

After a rough go in the 1980s, part of which he spent ravaged by drugs and homeless in Chicago, Williams’ cause was taken up by the 1990s garage punk underground, and he maintained that successful association for the rest of his life. Norton Records got the ball rolling with the album Greasy, which found Williams revisiting some of his classics.

It was a move to In The Red Records in 1998, though, which yielded perhaps the gnarliest, most indisputably punk album of his career. On Silky, Williams maintained his signature cool-cat approach, but a few decades of hard living had colored his voice with more than a patina of dirty old man; anyone doubting his credentials in that department could peruse song titles like “Pussy Stank” and “Looking Down At You – Looking Up At Me” to put their fears to rest. Nastier even than the lyrics, though, was the music: produced by Mick Collins and Danny Kroha, two thirds of seminal Detroit industrial-R&B freaks the Gories (and later the Dirtbombs and Demolition Doll Rods, respectively), this is one of the grossest, noisiest rock records of the decade, owing as much to Pussy Galore and the Chrome Cranks as it did to classic R&B. Williams continued to make great, fun music for the rest of his life, but never again did he go so joyously off the rails.

Any music fan should mourn the passing of these two heroes, as both have songs in their catalog which are as classic and universal as anyone’s. Still, for anyone with a special interest in the wild, distorted, Dionysian—in a word, punk—side of things, this last week has held an extra sting. Take heart, though, my friends: while they may not have died young, Dick Dale and Andre Williams lived fast as hell, and whatever’s going on with their corpses, the music they left behind is certainly a beautiful thing to behold.