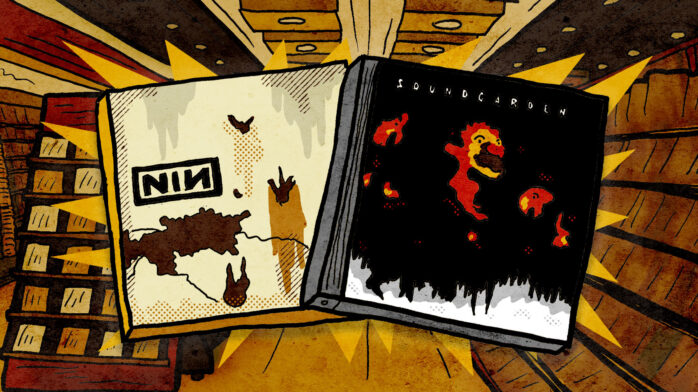 One of my favorite pastimes in the mid-90s that Jonah Hill markedly did not cover in Mid90s was Midnight Madness. For all of you no-good millennialflakes who don’t know better, Midnight Madness was a recurring event in which some big box, mostly indie record stores reopened at 12:00 am on select Tuesdays to sell rabid fans an album that would go on to move hundreds of thousands of units that week. I know the concept of buying physical music en masse sounds ludicrous, but take it from Old Man Bonzo—it happened. Generally, you’d load into your horse and buggy, trot past the apothecary to your nearest participating brick-and-mortar, then stand in line with your fellow unwashed commoners for the privilege of spending at least 15 dollars on a compact disc. I miss it dearly.

Midnight Madness was an event reserved for household name artists. If you were salivating at the prospect of being first to hear, say, Sonic Youth’s Experimental Jet Set, Trash and No Star in May of 1994, you’d better hope that one of those acoustic Alice in Chains EPs was coming out the same Tuesday. Otherwise, tough shit—you and the other snobs had to wait until the next day to hear the 13 songs that weren’t “Bull in the Heather.” Luckily, I hadn’t explored too far beyond the then-outrageously popular world of ‘heavy alternative,’ so in my humble estimation, March 8, 1994 was the Midnight Madness to rule all Midnight Madnesses: the unveiling of both Nine Inch Nails’ The Downward Spiral and Soundgarden’s Superunknown.

This fishnets-and-flannel pairing was chocolate and peanut butter for a dork living south of Cleveland like me. Every suburban kid in the country who fell in love with grunge had Seattle envy—how could all this killer music come from one city, and why wasn’t it the one closest to me? But in Trent Reznor, the Buckeye state had one of their own turning/decapitating heads nationwide (even if he was technically a western Pennsylvania transplant). Goddamn right, I was buying both records.

And I was going to do so at Quonset Hut, a local five-store chain that I fucking wished I was cool enough to work at, only to be immediately disillusioned upon doing just that between semesters a year later. Instead of allowing me to peddle bands that Pavement hated to similarly impressionable children, they stuck me in the head shop section to sell darts, lava lamps, Zippos, Bob Marley wall hangings, and pretty much anything three-dimensional that had been dunked in a vat of patchouli.

Which… whatever. On March 8, 1994, I obviously couldn’t see that far into the future. Just long enough to know that I had to wake up at 7:30 am for school the next (well, same) day, which did not dissuade me in the slightest from having to have two 65+ minute albums at the stroke of midnight.

In retrospect, Midnight Madnesses were perhaps best suited towards those with little-to-zero real world responsibility. So, no duh, the line at Quonset Hut wasn’t entirely comprised of zit-faced kids like me. There were plenty of drinking-age sportos, motorheads, geeks, bloods, wasteoids, dweebies, and dickheads, most of them boasting flasks, smokes, intimidating facial hair, and the whole night to party away with these killer albums. As critical as it was to check in with the friends who accompanied me the next day at lunch (“Holy shit, song four is so hard! Uh, whatever it’s called!”), on this night I had to prioritize what to listen to upon returning to my bedroom’s sometimes-trusty Sony CDP-C500 5-Disc CD Changer.

I went with The Downward Spiral first, all the way through. It was a concept album, and that demanded start-to-finish attention at the expense of any lingering pre-calc homework. All anybody had heard prior to March 8 was the “March of the Pigs” single, with what turned out to be a not-far-removed-from-the-album remix of “Reptile.” Both songs were as abrasive as anything on 1992’s Broken EP, and the game-changing “Closer” wouldn’t be released as the LP’s second single for nearly three months. On that night, The Downward Spiral seemed like the coolest possible version of career suicide; the preppy shitheads in pre-calc who had Pretty Hate Machine shirts would dump NIN, leaving them all to me.

This was a midnight album, all right, and all about madness. And sex. And power. And regret, and self-flagellation, and your God is dead and no one cares, and a great many more prurient and disquieting topics that appealed to me—even if I was too young to understand most of them. Maybe some of Trent’s lyrics are a little carved-into-your-desk-during-detention, but everything in “Mr. Self Destruct” he screeched—“I am the bullet and the gun/I am the truth from which you run/I am the silencing machine/I am the end of all your dreams”—sounded so feral and unhinged against the synthetic onslaught that, really, who gave a shit?

When the white noise of “Hurt” finally cut off, I was mentally and physically spent, but felt an obligation to at least jump around Superunknown. And let’s be real: The first single was “Spoonman,” and when you choose that fucking song to follow up the riff orgy that is Badmotorfinger, I’m sorry, I can wait a bit to hear what else you have to offer. I knew Superunknown wasn’t going to suck, but short-haired, only-occasionally-shirt-wearing Chris Cornell didn’t intimidate me anymore. I mean, I wanted to see the MTV-banned “Jesus Christ Pose” video so badly three years earlier that I tried to descramble “Hot Rocks” on the Playboy Network to get a glimpse of what was pissing everyone off. It was verboten and bizarre, and had something uncomfortable to say about organized religion the way NIN’s deeply fucked up long-form Broken video had something uncomfortable to say about, well, getting your penis chopped off by a straight razor. All of this was a far cry from a song about a busker who played spoons at Pike Place Market.

That said, it didn’t take me long to see why Superunknown slayed; all it took was getting home after school on Tuesday and just playing the bastard all the way through. It’s not as consistent as Soundgarden’s back catalogue, but consistency isn’t everything, and especially not for a band that never wrote anything remotely resembling the same album twice. Seriously, can you identify a through line between Louder Than Love, Badmotorfinger, Superunknown, and Down on the Upside other than the personnel (the only notable change being Ben Shepherd replacing founding bassist Hiro Yamamoto after Louder)? How can you pin a genre tag on an album with music as haunted as “Fell on Black Days,” as contemptuous as “Limo Wreck,” or as lush as “Black Hole Sun”? It’s not metal, or stoner rock, or alternative, or sludge. It’s just Soundgarden, being themselves, entirely. As always.

Superunknown and The Downward Spiral require great trust. Their creators indulge in wild experimental impulses, incongruous and unpredictable mood swings. Both despite and because of that, the albums galvanized two previously-and-since-great bands’ historical standing. The former concludes with a song called “Like Suicide” that is not about suicide, but a gruesome mercy killing. The protagonist is left alone to reflect upon and process the destruction he’s wrought… just like the protagonist of Nine Inch Nails’ “Hurt.” Twenty-five years later, these albums are not meant to be skimmed or choked down with distractions looming on the horizon; distractions like the sun.