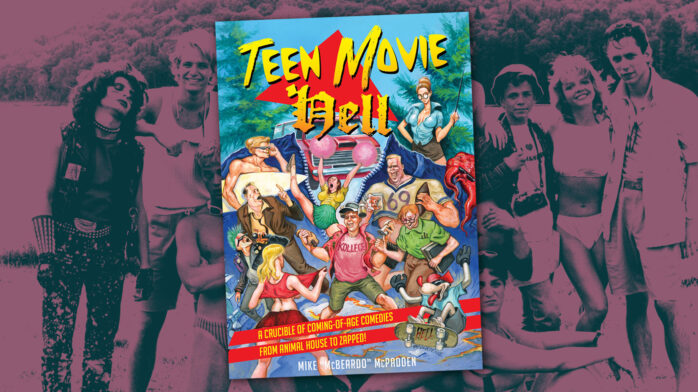 The anthology collects over 350 capsule reviews of the genre’s most re-watchable, titillating, alternately indefensible and empowering films released “between American Graffiti in 1973 and Dazed and Confused in 1993—with a bit of obvious bleeding over a few years on both sides,” the author clarifies. Much like McPadden’s previous tome, 2014’s Heavy Metal Movies, the title lets you know exactly what you signed up for, yet didactic fanboy trolls will demand elaboration. Slipping effortlessly into the role of didactic fanboy troll, your humble correspondent proposes Tom Hanks’ 1988 body-swap classic Big as one of Teen Movie Hell’s more curious omissions, giving McPadden ample opportunity to lay down the law(s).

“The movies I reviewed had to be sex-driven comedies about teenagers, made for and marketed to teenagers with the promise of on-screen nudity and rude humor,” he explains. “That’s how something as low and ugly as my beloved King Frat makes the cut along with a film as high-minded and heartfelt as Say Anything. Big is a family comedy about a twelve-year-old kid who turns into a man in his 20s and, therefore, it’s outside the scope. Something closer might be, say, Parenthood, with its subplot about teens Martha Plimpton and Keanu Reeves having sex, but again, that’s a film focused on the adult characters and made to appeal to a mass audience.

“In terms of stuff I missed, I know I left some movies out and I know I got some things wrong,” he reasons. “I just don’t know what those are—yet. Readers will fill me in, I am quite sure.”

Now 50, McPadden should eventually be a unanimous inductee in the Adult Video News Hall of Fame’s “executive branch,” dedicated to “key members of the industry who work behind the scenes in the corporate offices or excelled in other capacities.” (No, I did not make up a single word in that sentence.) He is the founder of seminal NYC porn zine Happyland (tagline: “the heartwarming adventures of a boy and his dick”), a former editor at Hustler, and former head writer at Mr. Skin. And he hasn’t exactly gone PG-13 in middle age—the anthologist moonlights as social media guru for Gilbert Gottfried’s Amazing Colossal Podcast. (Indeed, the diminutive living legend gives great blurb for Teen Movie Hell: “This book is good for people who like teen movies. Teen movies are good for people who like gratuitous nudity. I am those people!”)

Which brings us to the part where we take a step back and acknowledge that we’re devoting a sizable profile to a white male with a prolific adult entertainment background examining the legacies of The Bikini Carwash Company and Hollywood Hot Tubs. If Dana Carvey were still trotting out the Church Lady, he’d surely lisp, “Could it be… problematic?!” 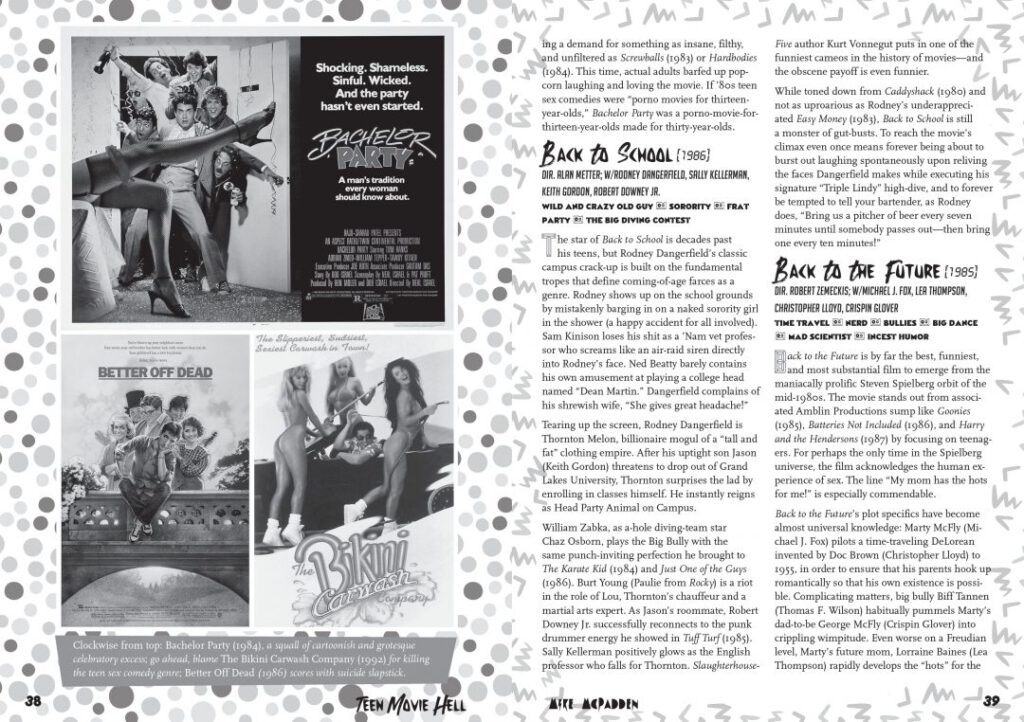 To his credit, McPadden has considered this at length—physically exacting length. Teen Movie Hell was nearly published in 1999 (under the Pauline Kael-nodding title I Lost It in the Locker Room!) via St. Martin’s Press before the division set to release it went under. Having developed beyond the “angry, berserk, obscene persona” he had cultivated at Happyland and Hustler, an older, wiser, self-described “married [and] sober” McPadden decided to revisit the conceit after the success of Heavy Metal Movies… only to discover that bad timing is everything.

“The version of Teen Movie Hell I submitted in 2017 still contained its share of cheap jokes and lusty indulgence,” McPadden admits. “That book was slated to come out in fall 2018—almost at the exact moment that the Harvey Weinstein atrocities came to light, and the #MeToo moment to flight. I lost my shit. Straightaway, I panicked selfishly because I’d done all this work and it would suck for me if the book came out and got slaughtered. Then came waves of consideration about how maybe these movies really did make the world a worse place and they shouldn’t be celebrated. And then came—as I think it did for many males—intense personal reflection on my own behavior in times past and even present. All this proved stressful to the point that one day I actually vomited over it. So far, that’s the only time I’ve experienced that treat.”

“So, in full doomsday mode, I asked Ian Christe, my publisher at Bazillion Points, to pull Teen Movie Hell,” he continues. “We talked long and intensely about it. Ian ultimately said he wouldn’t pull the book, but he’d put it in the deep freeze until such time [that] I might be ready to come back to it. That time occurred not all that much later, on Thanksgiving morning 2018, to be specific. The Voice of God—or whoever—bellowed in my head, ‘Schmuck! You know all these brilliant female writers who specialize in film! Put them to work!’”

And that’s perhaps the coolest element of Teen Movie Hell. In addition to McPadden’s thoughtful, self-aware, bitingly acerbic collection of capsule reviews, the collection features three introductory and two concluding essays by prominent female contributors from the A.V. Club and Diabolique, as well as the authors of House of Psychotic Women and The Wilder Life. They ruminate on sex comedies in the age of #MeToo, the infamous abortion subplot to Fast Times at Ridgemont High, and the often uncomfortable student-teacher dynamic in the genre. Additionally, guest reviews are contributed from the likes of Lisa Carver (Rollerderby), Heather Drain (Video Watchdog), Christina Ward (VP of marketing and publicity at indie publisher Feral House), Rachel McPadden (XOjane and, yes, the author’s wife), and Liz Mason (Quimby’s). “I want to make clear, though: I wasn’t interested in pandering,” McPadden emphasizes. “I only contacted writers whose work always leaves me awestruck. Female-for-the-sake-of-female was not the idea here.”

If the idea was to create an egalitarian forum in which genre fanatics from all walks of life can reconsider seminal (huh-huh, huh-huh) favorites both mainstream and obscure, McPadden has succeeded. He writes passionately and comprehensively about beloved director John Hughes’ career as a class warrior “for the bad guys,” and reserves particular venom for the eponymous rich-kid antihero of Ferris Bueller’s Day Off, an increasingly common revisionist take on the ‘80s cult favorite. (“Watch how Ferris interacts with anyone who’s not white, not rich, not from an exclusive suburb, not in possession of expensive material items, or, ultimately, not him.”) It begs the question if a byproduct of McPadden’s personal evolution is point-of-no-return disdain for a movie he cherished in adolescence. In the case of Ferris, it turns out he’s always detested the “endearingly incorrigible scamp.”

“The thing with Ferris Bueller was that I had that repulsed, genuinely ‘offended’ reaction to it—and to him—when I was 17,” McPadden attests. “At the same time, I was trying to consume every Nazisploitation and Italian cannibal film ever made while listening to Howard Stern blast apart every language and topic taboo imaginable on morning radio, and blaring Fear, the Meatmen, and the Butthole Surfers into my brain the rest of the day.” 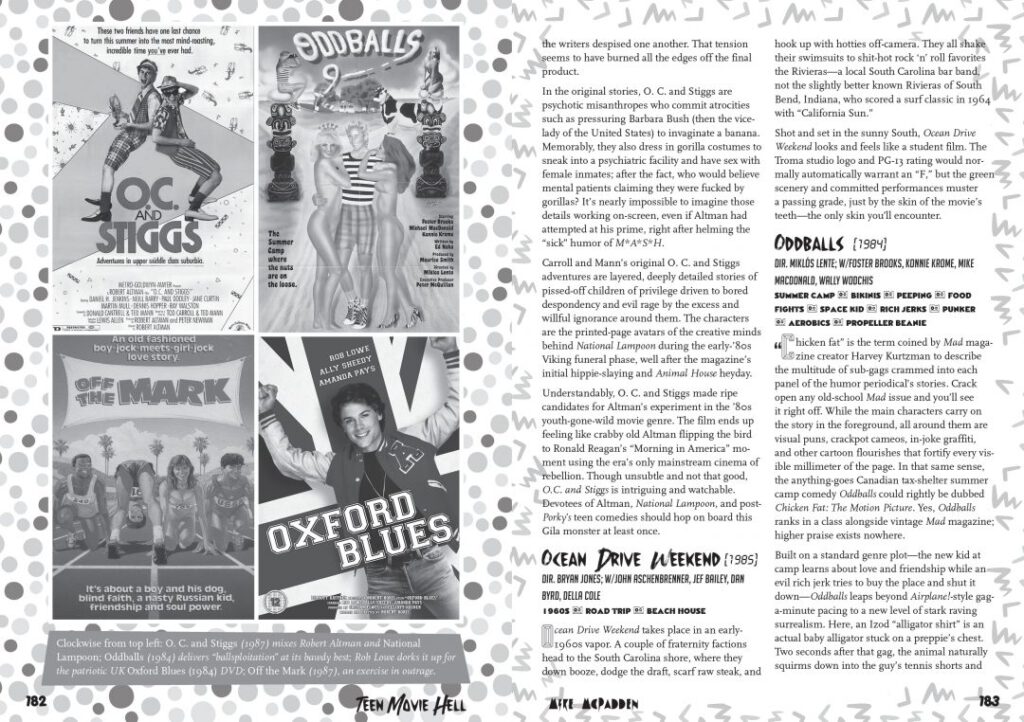 “Funny is funny—but my funny is not your funny,” he continues. “The issue now is that the loudest segment of society dictates that your funny better not go against their funny, or you’ll suffer some very unfunny life and career consequences. As oppressive and censorious as that can be, I appreciate knowing the real-world negative impact of, say, Long Duk Dong. The gong sound that announces his appearance in Sixteen Candles might still make me laugh—if only because it’s so inappropriate (which, I do believe, was always the joke)—but I recognize now the negative real-world consequences of such humor. It ain’t easy to navigate these changes, and I think problems arise when people demand that it should be.”

If you still have reservations about Teen Movie Hell, McPadden surely won’t mind us giving the last word to a woman. One of his more enthusiastic reviews is 1985’s Lisa Gottlieb-directed Just One of the Guys, in which teen reporter Terri (Joyce Hyser), weary of institutional sexism at her high school newspaper, disguises herself as a boy (“Terry”) and attends a nearby school to explore gender bias. Terri-as-Terry gets more than she bargained for with her mutual attraction to misfit Rick, and the film climaxes at the prom with our heroine literally and figuratively exposing herself to her crush.

In his review, McPadden makes a point of quoting Hyser telling Uproxx in 2015: “We talked about me having a bra on as opposed to nothing, but that seemed less realistic. So [Gottlieb] said to me, ‘I’ll tell you what: Let’s shoot it both ways and then you will get to decide. I was very comfortable with that, and she promised me, pinky swear on the set, that she would never put anything in that I was not comfortable with, and I totally trusted her. And that’s exactly what we did. I can’t stand that [in the Internet age] if you go to any porn site or booby site, I’m all over the place. It makes me sad, really, because it’s actually a very innocent and desperate moment that drives that scene and drives the reveal.”

Interesting decision from a “booby site” expatriate. Perhaps there’s as much to be said about McPadden’s acumen for auto-critique as his acumen for film critique. Then again, what else would you expect from a fifty-year-old sleaze peddler writing about skin flicks for preteens?