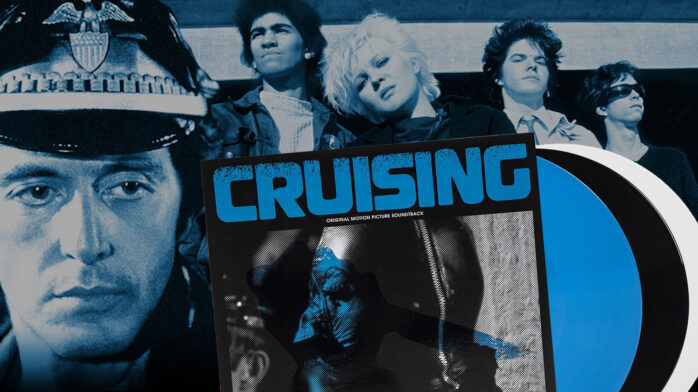 The Germs and ‘Cruising’: Like Two Peas in a Black Leather Pod

This month, Waxwork Records released the complete original soundtrack to Cruising, William Friedkin’s controversial 1980 thriller about a young cop (Al Pacino) who goes undercover to catch a serial killer lurking in New York’s gay leather/BDSM underground. The mammoth triple-LP release is the first to compile all of the music from the film, and there’s plenty to sell it: uneasy progressive jazz by Barre Phillips and Egberto Gismonti, crate-digger delights by obscuro punkers The Cripples and Parliament offshoot Mutiny, even a John Hiatt track that sounds surprisingly like an outtake from Iggy Pop’s New Values.

The biggest draw of this new release, though, was mostly missing from the original soundtrack LP and, indeed, the film itself: a studio session by legendary Los Angeles punk band the Germs, recorded especially for the film and assembled on vinyl for the first time. Though the band recorded six songs for the film, only one, “Lion’s Share,” appears in the finished film. These tracks showcase a band at their most drum-tight and feral, and it’s a joy to finally have them on wax.

The Germs might seem a strange choice for a decidedly New York film like Cruising; great as they were, they were also very much an LA band. Certainly, there was no shortage of decadent, damaged NYC punk bands in the late 1970s. Why did Friedkin and company pick the Germs over Richard Hell, Jayne County, or any number of Big Apple degenerates? It’s entirely likely that Friedkin, who worked with genius Hollywood producer/arranger Jack Nitzsche for the film’s music, simply didn’t know much about New York punk. But as it turns out, the Germs and Cruising were a perfect match in ways that the filmmakers probably didn’t even understand at the time.

While there’s never been a shortage of nihilism in New York music (see: Lou Reed, Lydia Lunch), there’s a purity to the Germs’ rejection of societal conventions that fits more readily with Cruising than the self-aware negativity of many NYC punks of the time. Crash had a tumultuous upbringing: he was raised by with a mentally ill mother, and his older half-brother died of a heroin overdose when Crash was 11. Along with Georg Ruthenberg, who would later adopt the name Pat Smear and become the Germs’ guitarist (and of course, go on to play with Nirvana and the Foo Fighters), Crash was kicked out of his alternative high school for “brainwashing” fellow students. In short, Crash didn’t come to question the conventions of morality by reading French poets at a tiny Delaware private school, as did CBGB habitués Richard Hell and Tom Verlaine; his attitude was a matter of course in a fucked-up life.

Cruising’s dark, alienated tone, more visceral than intellectual, is fully in line with this aspect of the Germs’ aesthetic. Its world is seedy, direct, sometime amoral, and fatalistic, but never comes across as judgmental, and it’s almost devoid of the pretenses of New York’s punk/art scene. In fact, when people aren’t getting murdered, the world of Cruising looks pretty… fun? Much of the film takes place in leather daddy clubs, but where a more alarmist filmmaker might have depicted a fringe-world creep show, we instead see gay men smiling while having risque, down-and-dirty fun. Even the kinkiest aspects of the scene are never depicted as something to revile—though Officer Burns is admittedly shown to be ill at ease with some of his surroundings.

Cruising and the Germs also share a history of both violence and controversy swirling around when they were first unleashed into the world. Cruising, for its part, was partially inspired by a series of articles by Village Voice writer Arthur Bell about unsolved murders in West Side S&M clubs. When Bell first caught wind of Friedkin’s production, he was suspicious of the film’s motives, expecting it to sensationalize and demonize the LGBTQ community at a time when gay rights were finally starting to see some progress. Some worried that the film’s depiction of violence against gay men might give some hateful people ideas. In the pages of the Voice, Bell encouraged people to protest and sabotage Cruising‘s production, and plenty of his readers took the bait: the production was constantly hampered by protestors making copious off-camera noise and drowning out the dialogue, with a good portion of the film’s dialogue overdubbed as a result. Shots were ruined by using mirrors on city rooftops to fly spots of light into the field of view, and rallies were held in the streets near the film’s sets. When the film first screened in San Francisco, there was sizable protest from the LGBTQ community.

The Germs, on their end, attracted a fair amount of detractors, who criticized the band’s tastelessness, sloppiness as a live act, and the cultishness around their fanbase—“Circle One”, the most dedicated of the band’s fans, gave each other circular “Germs burns” on their wrists with lit cigarettes and wore quasi-fascistic armbands with the band’s blue circle logo. Most of the violence and controversy surrounding the Germs, in contrast, came from their fans. The band had started as part of a small, artsy community whose violent anger was mostly a mannered provocation, but the Germs’ manic intensity had served to inspire a whole new punk scene in SoCal suburbs and surf towns. That early hardcore scene was less artsy, overwhelmingly male, and willfully violent: riots became de rigeur at Germs shows, and it wasn’t long before they were banned in almost every club in the greater Los Angeles area.

Time has quelled much of the controversy for both. Cruising is still disliked in some critical circles, and many of their issues are fair points: it’s written from an admittedly flawed ‘other-ing’ perspective which uses the gay BDSM scene as an exotic backdrop, rather than painting a nuanced portrait of it. That said, Friedkin’s intentions were more sympathetic than his detractors believed, and the film never demonizes gay men or the pre-AIDS cruising culture it depicts. The film also gave a good deal of leather daddies work, since the club scenes were filmed in the actual clubs and used regulars for most of the extra roles. While some maintain that the film paints a negative picture of gay club culture by zoning in on such a specific and kinky scene, others have embraced it as an imperfect time capsule; some 27 years after the film sparked so much furor in the pages of The Village Voice, on the eve of Cruising‘s DVD release, that very same paper ran a piece by Nathan Lee with a decidedly friendlier take on the film. “Cruising is a lurid fever dream of popper fumes, color-coded pocket hankies, hardcore disco frottage, and Crisco-coated forearms,” writes Lee. “Nowadays, when the naughtiest thing you can do in a New York gay club is light a cigarette, it’s bracing—and, let’s admit, pretty fucking hot—to travel back to a moment when getting your ass plowed in public was as blasé as ordering a Red Bull.”

The Germs, meanwhile, are punk legends. It’s unusual for them to not be in the top 10 of any list of seminal punk bands, and their influence is still being felt today. It’s not for nothing that they can be the primary draw for a high-end premium reissue of a soundtrack for a cult film.

Both Cruising and the Germs are still acquired tastes, and the kind of thing on which one might want slap a content warning nowadays. Still, the fact that documents of both are being kept alive and available is essential, and cause for celebration. Now, where’s that Cruising deluxe Blu-ray to match?