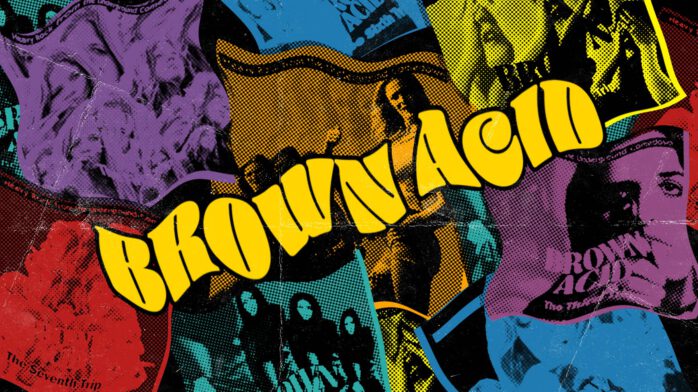 These ‘Brown Acid’ Comps Are Rewriting The Hard-Psych History Books

For decades now, the orthodox understanding among rock ‘n’ roll fans has been that there was something of a “rock drought” roughly between the time of Woodstock and the first Ramones record. This was a time when stadium pomp all but replaced street-level kicks, an era of excess which nearly suffocated rock ‘n’ roll before punk rushed in to give it CPR.

This narrative isn’t totally baseless: the early 1970s were indeed a time of increased homogeneity in radio formats and consolidation of major labels, and many of the teen dance halls that dominated 1960s rock culture shuttered as they were replaced in the ol’ zeitgeist with giant outdoor concerts and festivals. In an era where Led Zeppelin was traversing the world in a private jet, there wasn’t much room in the mainstream consciousness for local one-hit wonders and popular club bands.

In retrospect, though, that view is sort of narrow. Even setting aside the brilliant, but artier, underground rock being made most prominently in Germany, Japan, and New York City through the first half of the 1970s, blue-collar rock ‘n’ roll wasn’t exactly on life support in the early-mid 1970s. Yes, local, working-class club bands had gotten crunchier, slower, and less popular in the wake of Blue Cheer, Black Sabbath, et al., but they hadn’t gone away; they were just being roundly ignored by rock critics and the powers-that-be.

These bands were sorely under-documented, if documented at all. Still, some of these luckless fuzz-farmers managed to at least release one private-press album or, more often, a 7” single—which mostly served as demos to get more gigs, send to record labels with fingers crossed, or as something to give friends and family as a keepsake. Little ever came of them beyond that, at least when the bands were active.

Fast forward four decades, though, and Brown Acid is here to do their part to fix history’s mistakes. A collaboration between Daniel Hall’s RidingEasy Records and Permanent Records co-owner/Salt Lick bassist Lance Barresi, the Brown Acid series exists to extol the virtues of these heavy, occasionally psychedelic, and eternally macho forgotten gems. The expertly compiled, carefully sourced collections feature the sort of songs that make collectors of rock ‘n’ roll obscurities salivate, a holy litany of unknowns conjuring veritable orgies of howling fuzz, maniac drums, boner-inducing bass throb, and stoned-to-the-bone lyricism. The latest volume in the series, Brown Acid: The Eighth Trip, is set for release on April 20; as you might expect given the sounds at hand, the date wasn’t picked at random. “We release Brown Acid comps on my two favorite holidays,” Hall explained in a recent phone interview. “4/20 and Halloween.”

Most of the bands on Brown Acid compilations were recorded during the aforementioned drought period, but while that is a typical ingredient, it isn’t essential. “Generally speaking, the vibe of the record matters more than the year it came out, but due to trends in recording technology and musical styles, the era in which most of the records tend to fall is 1968-’74,” Barresi says. “There are definitely a couple things that have fallen earlier and later, but that’s the year range I tend to look for on a label.”

“It’s basically post-hippie and pre-punk, that no man’s land where guitar bands were cranking it louder,” Hall expands. “It’s not really “garage” music, but it’s not pure proto-metal, either.”

None of these bands made a dent in the national consciousness in their time. “Most of the stuff that we get behind was never released on a major label,” Hall says. “These are ‘labor of love’ projects.” This is as much a matter of practicality—both Hall and Barresi stress that everything in the Brown Acid series is licensed, a much more complex bureaucratic process when dealing with major labels—as aesthetics. “It helps with the sound,” says Barresi. “You’re usually dealing with a lower fidelity kind of sound, which adds to the DIY, homemade vibe of the records.”

Given the obscurity of the performers, it’s almost never an easy task to track down these bands’ members, but Barresi takes to the task with relish. His original goal in doing so, though, was not making compilations, but simply having new records to DJ and sell in his Permanent Records shops.

“This whole thing got rolling because I was trying to source deadstock for the shop. I’d come across a rare record, see the band members had unique names or were in a weird part of the country, and I’d try to dig ‘em up in the phone book or write a letter,” Barresi explains. “There would be zero copies for sale on Discogs or Ebay or whatever, so the only option is to find one in the wild, or track down someone from the band to see if they have any copies. They usually don’t, or they just have their one personal copy, and they either ditched or sold the remaining stock a long time ago. I’ve gotten a lot of dead ends and disconnected lines.”

Part of the trouble in finding these musicians, of course, is that a great many of them gave up their rock star dreams decades ago. “Say it’s 1968, you’re 17-18 years old, and you go to record something,” Hall says. “You’ve saved up your money and you spend it pressing 300 copies of your 7”. Your band never plays outside a 200 mile radius. Then, you knock up Suzy, and you gotta get a real job. That’s a pretty common story among the guys we talk to.” Plus, of course, there are plenty that are no longer with us. “It’s unusual for all the original members of these bands to be alive. A lot of hard livin’ went down.”

“For most of these tracks, nobody’s knocked on the door about any of it, so when we come knocking, they’re just shocked,” Hall continues. “A lot of what we go after is usually a person’s first record, and some people did go on to bigger things, but for the most part it’s something where it didn’t work out, and now they’re a plumber.”

Even though Hall and Barresi have amassed a sizable backlog of licensed tracks, Barresi is still out in the field digging regularly. “That’s my favorite part about doing this: getting out in the real world, showing up to record fairs and stores, hanging with collectors and trading. The internet is not the be all, end all; there’s a whole, exciting world out there of things to discover.”

“Make no bones about it: Lance is definitely the dude,” Hall says. “In the world of obscure rock ‘n’ roll record collecting, he has definitely reached wizard status. He’ll come up with stuff that even the old guys, fellow wizards, will not know what the fuck it is. It’s really hard to do what he does, especially in 2019.”

Even eight volumes in, Brown Acid shows no sign of slowing down, and the well is far from dry. According to Hall, “if we stopped licensing tracks right now, we’d still be good for another eight or nine volumes, no problem. We’re already planning a big thing for the 10th volume next year.”

Barresi, for his part, feels like he’s barely scratched the surface of what’s out there. For this most recent volume, Swedish record collector Jan Rehnman brought records to his attention that had previously been well off his radar. The dig never ends, and Barresi is wide open to anyone else with an artifact to share. “I’m still all ears on this stuff. It’s amazing how deep and wide this river is… even in this Youtube age, there’s still unknown stuff!”

Brown Acid: The Eighth Trip can be ordered now from RidingEasy Records, releasing on 4/20. RidingEasy is also co-hosting Psycho Smokeout in Los Angeles that day, if you happen to be in town and feel like getting hazy.