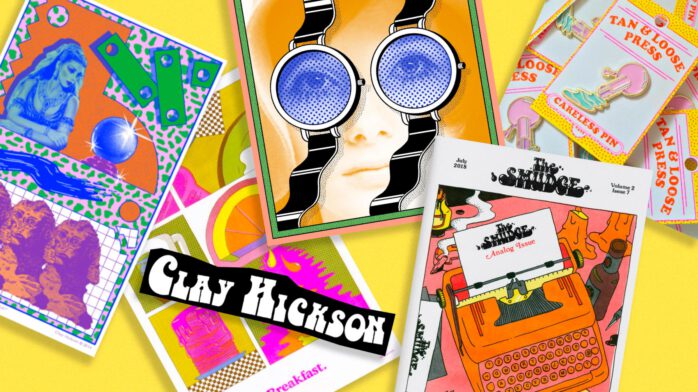 “I am barely literate in Adobe,” Los Angeles-based designer/illustrator Clay Hickson admits. “I don’t know how to use Illustrator at all.”

For many designer types, it would be shooting oneself in the foot—if not career suicide—to admit they’re no great shakes at the dominant tools of the trade. Hickson, however, is of a different breed: his work often utilizes archaic, “imperfect” techniques, and almost every project begins with a pencil meeting paper. This is unusual for any graphic designer, much less one who’s done work for high-falutin’ clients like Netflix, Mastercard, and the New York Times.

Tan & Loose Press, the small publishing house which Hickson operates with his wife and fellow artist Liana Jegers, prints almost everything with a risograph, a machine which functions as something of a middle ground between screen printing and photocopying. Colors are printed one by one; large patches of solid color tend to print unevenly and smear like fresh newsprint, giving every copy a slightly faded, homemade feel. Hickson went to school for printmaking, but he didn’t discover his now-signature method until after college, while he and Jegers were living in Chicago. “When I got out of school, I didn’t have access to a print studio anymore, and I’d seen people posting photos of riso prints online. I didn’t know what it was, but then I found a machine on Craigslist and just went for it, even though I’d never used one before.”

In the risograph, Hickson found a printing technique perfectly suited to his illustrations. His style largely leans towards bold colors and simple lines, a bright and lively minimalism inspired by legendary design firms like The Memphis Group and Push Pin Studios (“Seymour Chwast is definitely my favorite, but I love just about everyone in that studio’s orbit… lately, I’ve been trying to track down John Alcorn books, his stuff’s amazing”). Aside from the work of its founders, Tan & Loose also frequently publishes beautiful works by likeminded artists like Rachel Howe and Sophy Hollington. In our current state of perpetual digital bombardment, just holding one of these publications in your hands—and possibly getting a bit of ink on said hands in the process—can feel like a big gulp of fresh, de-internetted air.

None of this is to insinuate that Hickson is some kind of Luddite, but when I ask him if he’s ever gotten so frustrated with his laborious process that he’s considered doing it all digitally, he emphatically rejects the idea. “There are moments when I recognize something is going to be easier in Photoshop, and I do a good amount of work in there. More often, though, I have days where my computer is driving me nuts, and I say ‘fuck it, I’m just going to do this by hand.’”

Tan & Loose is perhaps best known for The Smudge, a slim monthly newsletter which revels in a bold, cheap aesthetic inspired largely by 60s/70s underground newspapers. Though much of the content leans toward gentle stoner humor, paeans to the joys of seed catalogs, and the like, The Smudge is just as much a product of social unrest as its vaunted boomer predecessors. “During the Bush years, I was in high school, and I’d go to protests in San Francisco and stuff, but I wasn’t really following politics then, or through the Obama years. I never felt that engaged,” Hickson says. “The 2016 election was kind of the moment that Liana and I decided to start The Smudge. We’d been wanting to start a monthly paper, but didn’t have a focus, and that felt like a galvanizing moment. I don’t know that it’s had a huge impact on my personal work, but it’s been nice to have The Smudge as an outlet for any things I may be feeling politically from month to month. I don’t know how much of an impact we’re having, but in terms of staying engaged, it’s been really helpful.”

Unlike the underground papers that prefigure it, though, The Smudge is in the curious position of being a proudly analog-leaning project which is nonetheless promoted primarily via social media, especially Instagram. “I’ve never thought of it as being paradoxical, but it’s something that drives me crazy,” Hickson says. “In a perfect world for me, the internet wouldn’t factor into our work at all, but realistically, that’s the tool we have at this time to spread our work.”

Hickson is still trying to find a balance between the two. “The Smudge isn’t online; we sell the issues online and promote it there, but we don’t offer a digital version or post articles anywhere. It’s a physical paper that you have to order or subscribe to.”

Perhaps that is what makes the Tan & Loose approach political, or at least socially conscious: a move towards a slower, more direct human interaction, a respite from the incessant background noise of digital life. “It’s a conscious effort to change the pace of consumption,” Hickson says. “At the very least, we want to give people a chance to slow down for a minute and read something.”