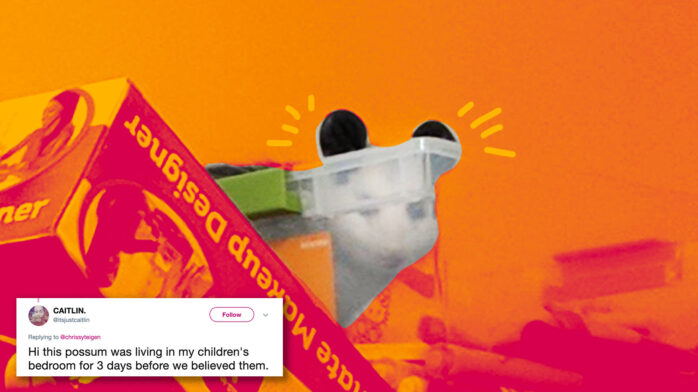 When Caitlin Burch’s 7 and 10-year-old daughters told her there was “something in their bedroom,” they thought it was just an overactive imagination, telling the girls that it was probably nothing. Burch and her husband put out a few traps thinking it might be a mouse—just in case—and told the girls that everything was okay.

It was not okay.

In a now viral tweet, Burch told the story of her daughter’s new roommate.

“They used the words ‘creature’ and ‘rat,’” Burch told Buzzfeed. “The 7-year-old insisted that there was something… [she] would not sleep in her room. They sleep in their room every night, but I told her she could sleep in the guest room that night if it made her feel better.”

After a few days, the 10-year-old ran into her parents room and told them it was back. That’s when they found the “creature”: an opossum. And it had been living in their daughters’ room for three whole days. “It had crawled into one of the dresses hanging in the closet,” Burch said. “It was peeking out of the neck hole.”

“We realized after the fact that we should have noticed some things,” Burch added. “Some toys knocked over. Dog’s food missing, so we know it had been in the rest of the house too. The dog never made a peep the whole time it was in the house.”

Thankfully, after a few hours, Dad was able to catch their new roommate and release back into the wild.