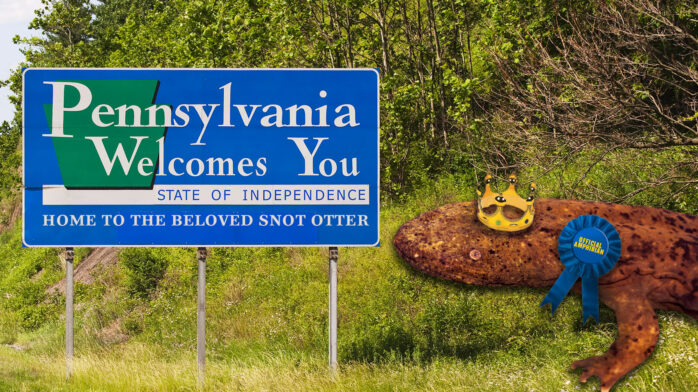 The “Snot Otter,” Pennsylvania’s New State Amphibian, is a Hero For Our Changing Times

Whether it’s goofball dog breeds like the Shiba Inu, underwater Ted Cruz doppelgängers like the blobfish, or coastal elite celebrities like Pizza Rat, we as a society love to look at weird animals doing weird shit. It is a fixation which crosses generations and party lines, the great uniter that allows Radiohead fans and Radiohead haters alike to come together in harmony.

Looking back through a post-apocalyptic haze, future generations will surely have a lot of questions about our time—including some, I’d bargain, about how we managed to spend an average of 11 hours a day staring at screens while the world crumbled around us—but if it’s made clear to these future folk just how much of the fabled internet was a repository of cute, ugly-cute, and weird animals, they might begin to understand and sympathize with our ways.

To be fair, there is occasionally a positive side effect to our fascination, in that exposure for certain animals has helped expand conservation efforts. One such victory was claimed just last week, when the eastern hellbender salamander was declared Pennsylvania’s official state amphibian, thanks to a concerted effort by student conservationists in the state (particularly, those with the Chesapeake Bay Foundation). Though largely symbolic at this point—the hellbender enjoys protected status as an endangered species in several states, but Pennsylvania isn’t one of them—this new vaunted status is considered a potential boon for both water conservation and for the lizards themselves.

The eastern hellbender isn’t your typical popular kid, even by modern internet standards. They’re a weirdly flat, surprisingly large, slimy aquatic amphibian, with a litany of colorful nicknames like snot otter, devil dog, and lasagna lizard. NPR reporter Madeline Sofia recently described holding an eastern hellbender thusly: “It feels like I’m holding a very animated ball of snot that’s been working out on the weekends.” In short, to most humans, they’re kinda gross. But are they so gross they’re… cute? Pennsylvania governor Tom Wolf and a majority of the state’s General Assembly, by popular demand, have officially declared to the heavens: “Yeah, um, I guess?”

The snot otter isn’t just oddly alluring, though: they’re public servants. Extremely sensitive to water quality, oxygen levels, and pollution in the fast-moving waterways which are their natural habitat, the hellbenders’ presence or absence is considered a vital indicator for the environmental conditions of a body of water. They’re like nature’s EPA, except they actually work right.

It strikes me as important that the campaign to raise awareness for the devil dog’s plight has been mostly the work of “Generation Z.” (When are we gonna give these kids a proper name, y’all? Children are our future.) Yes, it’s not new for high school and college students to be passionate about myriad causes, but there seems to be a greater commitment to unglamorous, hands-in-the-dirt systemic change than there has been at any other time in recent history. Indeed, there’s not a damn thing glamorous about the lasagna lizard, but the youth recognize and respect their importance.

At the risk of painting with a too-broad brush, celebrity animals like the Central Park Hot Duck (and even all those goony-but-expensive dog breeds) are for baby boomer newspaper columnists. It’s all style and flash, with no eye on the bigger picture. The triumphant individual. Atlas Shrugged, but with cute animals.

Meanwhile, the mud devil are a species that works for the greater good—regardless of whether they’re appreciated or not—literally down in the dirt. Sure, most young people would still probably rather cuddle a panda bear, or some other prettier protected species. But they’re doing the legwork to protect species that wouldn’t necessarily make adorable pets/memes, and that’s nothing but a good sign.

Both congratulations and gratitude are due to the great state of Pennsylvania, and to the Allegheny alligators who now proudly represent their commonwealth, for showing the way to a brighter future. The eastern hellbender may be a lizard of many nicknames, but it’s not too late to add “American Hero For Our Times” to the list.