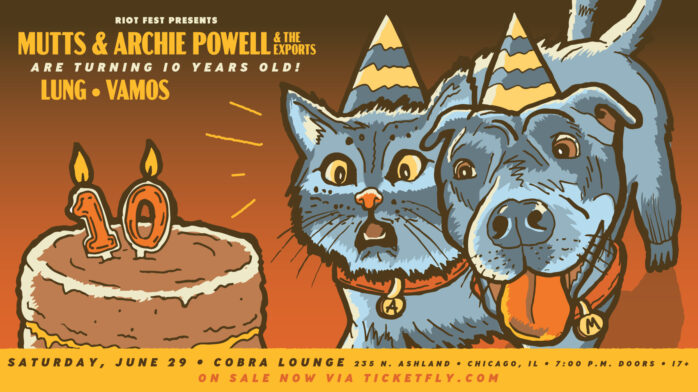 Tough as Tin: Mutts and Archie Powell & The Exports On Ten Years In A Band

Ten years is a long time to do anything, much less maintain the precarious, polygamous marriage dynamics that constitute a rock band. However, June 29 at Cobra Lounge will bring together two beloved Chicago bands, Mutts and Archie Powell & the Exports, to share the stage to celebrate the first decade of their respective endeavors. Both have survived years of crazy times, stylistic changes and, in Mutts’ case, a long line of drummers to get to where they are today. We got each band’s frontperson on the horn to tell the tale, and to predict the future.

RIOT FEST: It’s the 10th anniversary of your bands, which is the tin anniversary. Did you all get your tin items for each other?

MIKE MAIMONE (keys/vocals, Mutts): We haven’t, but one of the songs on the new record is called “Tinfoil Hat,” so I guess we kind of have it covered. We should probably make something of that at the show!

ARCHIE POWELL (guitar/vocals, Archie Powell & the Exports): Oh, tin? Good, I’ll have to get everyone sardines or something. We haven’t talked about that, but maybe a precedent will get set. I’ll implement it, and we’ll see what happens going forward. I’ll have to go digging in the recycling for some treats!

Ten years is a good stretch for any band. What’s changed the most for your bands in that time?

MM: Yeah, ten years is more than I’ve done most things. This has outlasted pretty much everything else I’ve done: relationships, school, anything. The obvious thing that’s changed the most, though, is the drummer. We’ve had nine different guys on the kit in 10 years! Our current drummer’s been with us for two years; the one before, we had for four. The first few years were a tumultuous back and forth of trying to find the right person for the kit.

Also, though, Bob [Buckstaff, bass/guitar] is married and I’m engaged, so the outlook is different. We’re not just thinking about the three of us, because we all have families. At one time, we would take a show in Brooklyn on a door deal on a Saturday, with a couple shows on the way there and back, and make $40 each, and it was totally fine. Now, we have other people we’re responsible for, so we can’t just hop in the van to go play shitty shows. We have to plan a little more, and pick and choose what we do.

AP: It’s a different vibe now. When you start out, everyone’s got a lot of coal in the furnace, so to speak; it’s a real gung-ho pirate adventure. As you get older, things mellow out a bit, and certain things are not as novel. This is sounding kind of bleak, actually, but I mean it from a cool perspective. We understand what a silly enterprise it can be to try to be in a frickin’ band.

On one hand, you accumulate a lot of experience and learn a lot of things, but on the other hand, every time we make a record, we know less, y’know? In a way, when you know more, you know less. It’s a weird paradox, though I think it’s true in lots of creative fields. When we did our first record, I was 100% fully into it, and felt like I couldn’t have done any better; the one we just finished was such an arduous process, and by the end of it I had no idea if it was any good. I just knew I couldn’t contribute any more—so it must be finished! When I listen to the first one now, though, I have nothing to relate to in it and I don’t really care for it, but the last time I listened to the most recent one, I was pretty pleased with it.

Do you foresee your respective bands continuing 20, 30, 50 years?

MM: Yeah, I don’t see why we’d quit. Bob and I are like brothers at this point, and like I said, I don’t have anyone in my life with whom I’ve had a relationship this long other than family. We have a relationship where, when I bring a song to the band room, I don’t know what he’s going to do and how he’ll change it, but I trust him implicitly to do something cool. Even if we do other things, I don’t see why we’d ever say it’s not a band.

AP: I’m shooting for a hard 50. Do you know what anniversary that is?

I think it’s platinum? [looks it up on the internet] No, it’s gold. Pretty expensive.

AP: That’s good to know. Well, anyway, the long and the short of it is that it’s still fun and we’re still friends, so there’s no reason to stop doing it. Things take place at a different clip than before, and at a certain point everyone has to support themselves, and that only becomes more and more gnarly as you get older. It’s slower than it used to be, but there’s no reason to put it down. So yeah, no end in sight.

Your bands are playing this anniversary show together, and you just put out a split 7″ together. What’s the history of your bands’ camaraderie?

MM: We met Archie and his band in 2010, at a show at the Beat Kitchen where we were releasing our third EP and they were releasing their first album. My impression right away was that these guys knew their shit; they’re kinda crazy, but they had a great crowd and all their pieces were in place. I really admired them and wanted to do stuff with them, because they’re rad people doing cool stuff. We just kind of bugged them for awhile, until they would do more shows with us.

Archie and I have done a lot of collaborative stuff, too. I had a gig for awhile called Collab/Corrupt where I had friends come in, we’d learn each other’s songs and play covers and stuff. Archie and I did it so many times that we basically had a whole set together of each other’s songs by the end of the year. Hopefully, we’ll end up doing a little bit of collaborating at this show!

AP: I love Mutts. When we met at that show in 2010, I didn’t know any of the bands on the bill, because we were still pretty new in town. When Mutts played, I was like, “Whoa, I didn’t know the bouncers had a band!” They had a scary, “I’m going to eat you” vibe, which I find very admirable and impressive to this day. I thought they were terrific since day one. They’re the best musicians in town, I think. They can do anything, they just know how music works in a way that I do not, and none of my guys do.

MM: We’re doing a 10 year anniversary tour in the midwest and east coast, then we’ll be putting out our fifth full-length album, Stuck Together. I think it’s planned for October. Then we’ll do an album release tour in the fall.

AP: We have a record that we’ve finished, which we took a very long time doing, that’s not out. I’d like to have that come out this year… I’m very proud of it, I think it’s our best one. We’ve been taking our time to make something we think is great, then we’ll see what things look like after that. As far as touring, we’ve kind of put that down for many reasons, but mainly to focus on this purely creative side of it all.

Mutts and Archie Powell & The Exports will perform their 10 year celebration on Saturday, June 29 at Cobra Lounge. Tickets are on sale now.