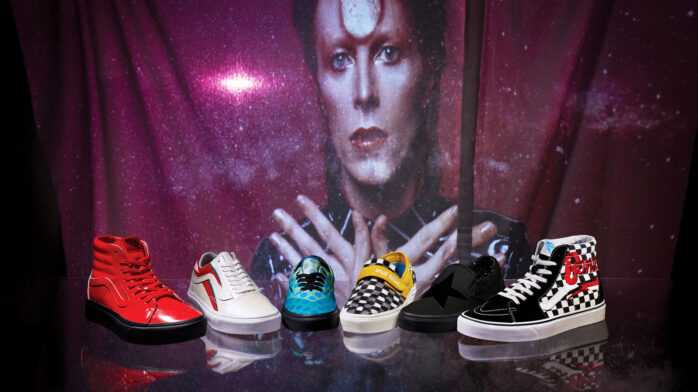 California skate shoe company Vans, after teasing it a bit last week, has revealed its entire tribute collection of David Bowie sneakers and apparel. The result is a fitting ode to one of history’s most fashionable pop icons, hitting shelves and online retailers April 5.

Bowie was a trendsetter like no other both in music and fashion, and each era of his legacy is showcased with a respective pair of kicks. Vans designers were tasked with featuring a career’s worth of album imagery in the collection, showcasing styles from his first hit single “Space Odyssey” in 1969 all the way to his final 2016 album Blackstar. There’s SK8-Hi Platforms to match his glam alter-ego Ziggy Stardust, fuzzy checkered Hunky Dory Slip-Ons imprinted with the album’s title and, of course, a pair of Old Skools bearing the iconic red-and-blue Aladdin Sane lightning bolt.

You can grab these sneakers—alongside an accompanying apparel line—for a limited time in select Vans stores and online at Vans.com/Bowie starting April 5.