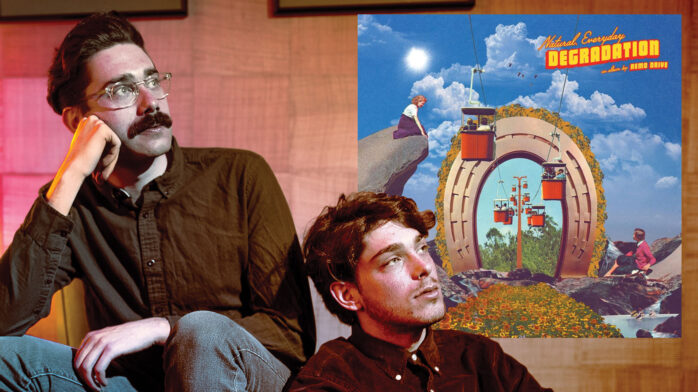 On the heels of their second full-length album Everyday Degradation releasing next week, Remo Drive shows no sign of slowing down anytime soon. After reissuing its humorously titled debut LP Greatest Hits on Epitaph Records last year, the emo-indie rockers shortly followed up with the Pop Music EP. Come next week, brothers Erik and Stephen Paulson will unveil Everyday Degradation with a special Chicago show at Bottom Lounge on Friday, May 31.

“Our first record was so much fun because it felt like we were breaking out of a box, mostly our local music scene,” Erik told Epitaph. “But almost as soon as we did that, we started feeling constrained by where we found ourselves. We wanted to keep thinking outside the box and finding our own unique voice.”

For the new record, the band pulled inspiration from storytelling songwriters like Bruce Springsteen and the Killers. It was produced by Joe Reinhart (Modern Baseball) and mixed by Peter Katis (The National, Interpol).

Friday, May 31 not only marks the release of Remo Drive’s new album Everyday Degradation, but will also bring the Remo Drive to Bottom Lounge for a rousing celebration with support acts Slow Pulp and Slow Bullet joining in. Fans of Blink-182, Mom Jeans and Sorority Noise will definitely want to check it out.

Get to know Remo Drive more with a five song playlist, crafted for your listening pleasure below—and grab your tickets now for their 5/31 Bottom Lounge show, because it looks like this one’s gonna sell out soon: