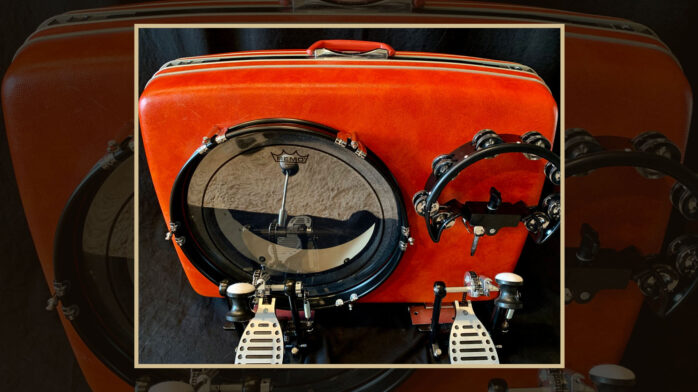 Bill Brill walks us through the careful process of building one
By Emily Reily / May 13, 2019 / Interviews

Buskers and one-man bands are jacks of all trades, attaching their bodies to all manner of cymbals, kick drums, and mandolins to create the fullest sound possible for a street corner gig. Suitcase drums were born out of the necessity for solo musicians to sound professional and be portable while on a shoestring budget—but they can also bring a unique sound and flavor to everyone from folk artists to heavy metal headbangers. Plus, it’s a near guarantee that no suitcase drum is built alike.

Bill Brill’s Texas-based Pan American Drum Company has been pumping out custom and stock suitcase drums since 2017. A self-professed product of the 90s, Brill lists among his influences Nirvana, Pink Floyd, Stevie Ray Vaughan and Robert Johnson. “I think the music that I really love and appreciate has its roots in the blues,” he begins. Brill talked us through his learning process, why modern suitcases are useless as drums, and why the whole thing is a welcome departure from his nine to five job.

RIOT FEST: How does a suitcase drum add to a performance?

BILL BRILL: If you’re a solo musician, it’s a very low-key background performance. When you add percussion to it, it changes it to be more of a main event. It gives them an edge, it makes them different, and it helps them to book gigs with bar and club owners much more easily. It changes the whole vibe of the performance.

Did you know drums before this?

I didn’t. I’ve had to learn everything from the ground up, including a lot of the craftsmanship that goes into it. In the early days I was doing a lot of experimenting, and a lot of them ended up in the garbage heap.

Why use a suitcase and not some other object?

They’re easy just to pick up in one hand. With the larger models, you can throw other gear in there. There’s a lot of utility to that design. Plus, they’re just inherently portable and they look cool. Everyone knows what that iconic Samsonite or American Tourister looks like. When you throw it up on stage and it’s got a drum mounted in it—and then you hear the end result—people really remember it.

It’s not going to sound like a full drum kit, because you don’t have as many drums. Generally [our drum heads] range between 10” and 16” drums. The 16” drums, when mic’d correctly, or if they’re one of the electric models that you can run directly into a PA… it will mimic a full kick drum. It’s pretty close.

These are a ton of fun to play. I think they have a lot of universal appeal. I love being plugged into the music scene in my own little way.

What other types do you make?

We do some dual head models that have a bass drum and a snare. Those are my personal favorites. I designed one that’s called The Maverick that’s actually made from a storage trunk. That houses a 16” bass drum and a 10” snare with the option of adding a tambourine just off to the side of the snare. And when you have that combination, especially with the bass and the snare, [people] would assume that there was a drummer.

Usually the Samsonites and American Tourister, ranging as old as the 1930s up through the 70s and 80s. I don’t know if you have a mental image of a vintage Samsonite from the movies—the thing probably weighed 50 pounds, and people are just carrying it through the airport. The iconic one would be that baby blue color. Those are the ones that tend to sell the best. Modern suitcases don’t work at all.

Why don’t they work?

They have a zipper that goes around the center, and when that gets hit with a drum pedal, it compresses and it just… the sound quality is terrible. The vintage ones are the only way to go. And I’ve tried [other suitcases].

Besides the zipper thing, does the material outside the suitcase affect the sound?

I have to rehab them and cut out inserts. Some of the models I’ll retain the original lining. Others I’ll remove the lining and I’ll have to modify the acoustics to make sure that it sounds right. That’s why I’ve settled on certain types, because I know that they work well. If I don’t know for sure that it’s going to be the right kind of sound quality, I don’t mess with it. So if it’s a failed experiment, I’ll just scrap it.

Are you referring to the ones that ended up on the scrap heap when you first started making them?

Yes. There are quite a few that have been taken to the Frisco city dump. I’ve had a lot of trial and error; initially, they wobbled all over the place, and you couldn’t have them on a hard surface ‘cause they would slide around. I’m really picky about the sound quality and I won’t sell anything that I wouldn’t use myself. I will only buy ones that are in good condition, no water damage, no stains, no odors.

You have to be really careful, because if they’re too old—once you drill into ‘em and cut into ‘em—there’s a good chance that the wood inside the case is gonna split. And then sometimes you don’t even know it until you pack it up and ship it. This is not the sort of thing that you want to have to redo for free.

I’ve seen a lot of how-to videos on suitcase drums, but you can say, ‘Hey, I can actually make them properly.’

Well, okay. But there are lots of things that we could make ourselves. I mean, we can grow our own vegetables. But do you really want the time and expense of doing it? Most people don’t. And most people don’t have the tools that are required in the first place. If you don’t know what you’re doing, you might as well buy one.

Who else has used your suitcase drums?

The one that I think is just phenomenally talented, his name is Rod Castro of Caroucells and he’s out in LA. He’s been on tour with Beyonce, Ellie Goulding, and he’s used one of my drums to go in and do his own album. He’s playing a baby-blue, 16” bass made out of an American Tourister. He makes that thing rock.

Can it be used for any type of music? I don’t think it would work for metal, would it?

Oh, you know, I don’t know—how fast can you stomp your foot?

It seems you’d have to be super good at keeping time with your feet while strumming and singing.

I’m very sure that 100 percent of my customers have more talent than me. I can play a guitar and use a drum, but if you asked me to add in singing to it, I think the whole thing falls apart. This gives me an opportunity to do something in the music scene that kind of feeds my soul.