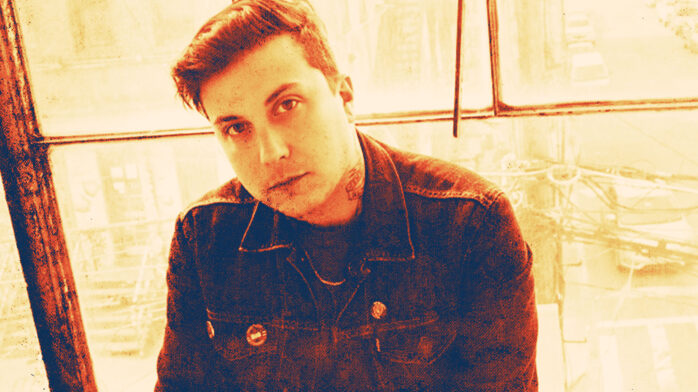 On Frank Iero, Hot Topic, and Feeling Like a Poser: An Education in Pop Punk

It’s November of 2015 during my senior year of high school. I’m standing outside the Metro between two of my best friends, waiting for Frank Iero to exit the stage door. Despite the cold, we’re wearing fingerless gloves, because that was the scene. I was also probably wearing black skinny jeans with holes in the knees (which I sliced myself), because that was my uniform for much of 2015.

For my friend Viveka and I, it was our turn to accompany our good friend Julia to a Frank Iero show, which they faithfully attended every time the ex-member of My Chemical Romance toured.

I had never much listened to Frank Iero in any of his iterations. Instead, 5 Seconds of Summer had ushered me into quasi-pop punk—really, just pop melodies with some electric guitar. We watched from the balcony as a circle pit opened up during “5th Period Massacre” and let the sound pull us under. Everything was loud because it could be. Afterwards we piled into Julia’s Subaru and ate McNuggets and listened to Danger Days along Lake Shore Drive.

Pop punk was always an outing: driving to the mall thirty minutes away because it had a Hot Topic, where we would rifle through the band tees and tattoo chokers and never really buy anything (except maybe some Manic Panic). A trip to the local Olive Garden under the guise of irony would usually follow, where we’d eat unlimited breadsticks and talk about the physics test on Friday. For my friends and I in the suburbs of Chicago, the pop punk scene was effervescent. We never fully committed to it—none of us were really all that hardcore, with the exception of Julia—but we dallied into it, flirted, and were always together.

I remember, once: Julia, allergy incarnate, ordered a Jimmy John’s sandwich to Viveka’s house while the rest of us baked a frozen Amy’s pizza. In the special requests on the Jimmy John’s order form, we wrote “write your favorite emo band on the bag.” When it arrived, Julia ran down the stairs to the basement where we sat among animal-shaped pillows and a projector, slapping the sandwich bag in the middle of our circle. Written down by the delivery guy were Screaming Females, Weezer, and Fall Out Boy— and, along the side, a hand-scrawled link to a Bandcamp page: “It’s my band…music is free.”

We typed, we clicked, we listened. We Facebooked, and we saw “show this Friday at seven.” We went. We took the L to Wicker Park and got our hands stamped at the door. The venue was small, in the backroom of a bar; we walked straight to the merch table. “Does one of you guys work at Jimmy Johns?” we asked.

The guy sitting behind the shirts nodded and called to his friend, who joined us in our small circle. We held up the bag. He looked a little shocked for a minute, and then he laughed, and then he hugged all of us, all six of us 17-year-old girls from Evanston. On stage later that night, he pointed at us where we stood in a clump in the room of probably 20 people, and talked about the community. We took a video of it that I still have on my phone. Pop punk is about showing up—even if you’re not a part of the scene, it’s about going, and being there, and listening.

I don’t think I’ll ever forget feeling the ground vibrate under my feet at Metro in November of 2015. I remember the night so viscerally, so vividly, purely by memory and not through phone photos. When I was younger, I was always afraid of seeming like a poser; I was constantly nervous of being found out, as if I needed to earn my keep (or in this case, my ticket). It’s difficult—especially for young girls, who are often pushed to the margins—to feel like you’re enough to be a part of something. But I’ve found that it’s less about being a card-carrying member of the scene and more about being present. It doesn’t really matter if you don’t know all the words to every song.

Frank Iero sounds like walking into a room of people and wanting to feel anchored to the ground. There’s enough melody in the guitar to moor the listener to the song, and to facilitate any punk-adjacents out there into his album. His music, both solo and with My Chemical Romance (and pop punk in general), is loud, and that’s the point. Music is one of the only things that makes me feel like a human being, and sometimes being a human feels fucking loud.