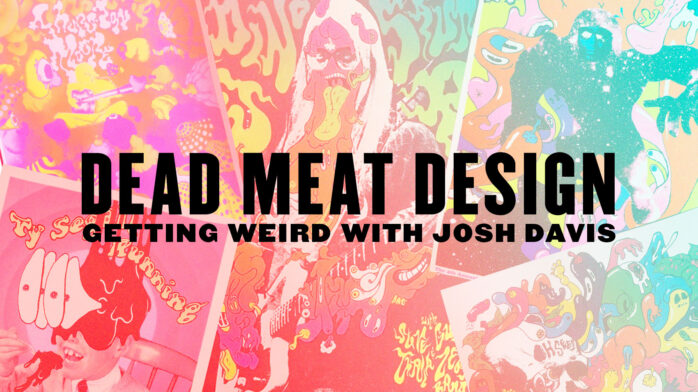 It’s hard to miss one of Josh Davis’s gig posters. The style he’s trademarked under the name Dead Meat Design, a wrestling match of vibrantly colored barf, bloodshot eyeballs, and sprawling phalluses weaving around each other, is what initially caught my eye at an Oh Sees show at Thalia Hall two years ago.

“The trippier, the better,” Davis says. “If the design is good enough, and it looks cool enough that you want to spend some time looking at it, you’ve gotta figure out what it’s gonna say.” It’s one of the many ingredients of a Dead Meat Design print, a recipe that has proven successful for his near 20-year career printing posters for the likes of Thurston Moore, Guided By Voices, and Jawbreaker’s show at the Aragon last November.

The blend of colorful, cartoonish violence Davis wields was born out of a love for “weirdo stuff” growing up—Ren & Stimpy and Robert Crumb are two examples he names. It’s a half-gross, half-funny combination of gritty photocopied images and blasts of psychedelia drawn on top: faces melting off, eyeballs jutting out of skulls, two bats vomiting into each other’s mouths. “Everyone thinks I do a lot of drugs,” he laughs. “I don’t at all.”

Those influences were channeled into his sketchbook drawings in high school, then into gig posters for his friends in punk bands. Soon after, Davis made the move from McHenry into Chicago in ‘99, where he’d start working among a packed but lively scene of screen printers. A friend introduced him to some of the more contemporary poster artists around the time, like Aesthetic Apparatus out of Minneapolis, Jay Ryan, and Dan Grzeca. One gig set his career in motion, though: a special “trick-or-treat” bag for an Alkaline Trio 7″ of Misfits covers, handed out at a Halloween show at the Metro in 2002. It was a big deal not only because of who it was for, but who it was made with.

“I approached Steve Walters of Screwball Press to have those printed, and he was like, ‘Oh yeah, why don’t you just do it yourself? You can use my studio.’ So I did that.” Davis would work out of the studio for the next 16 years under the wing of Walters, a Chicago screen printing legend who’s mentored several generations of local poster makers and is widely credited for fostering the bustling community that exists here today.

When I last bumped into Davis at the Pitchfork Music Festival recently, his booth was packed wall-to-wall with nearly a dozen other local screen printers, all chatting away with one another. Despite the sheer number of people making gig posters in Chicago, the scene has chosen to prioritize cooperation over competition. “Everybody’s tight—nobody’s stepping on each other’s toes,” Davis explains. “There’s certain bands that people work with, and we all know that and respect that. Everybody’s trying to help each other out. If there’s something I can’t do that I would fit, you know, Justin Santora better, I’d advise a band to go that way.”

Davis’s face-melting style has made him a go-to poster guy for a certain breed of underground rocker. “It does tend to be more like the trippy-psych, heavy-stoner kind of stuff,” Davis adds; for artists like Ty Segall and Oh Sees, he’s a regular. He met Oh Sees frontman John Dwyer back when Dwyer played in Coachwhips, and has since done a poster for nearly every Oh Sees gig in Chicago. “Dwyer is the coolest guy. He just trusts me—they’re one of those weirdo bands [where] anything goes.”

For the time being, Davis is busy designing posters, album art, and the occasional t-shirt design. Busy enough that he could give up most of his side hustles a couple years ago and open his own screen printing shop in West Logan Square. He’s not alone there, though. Steve Walters—who hosted Davis for 16 years and was looking to move—now works out of the Dead Meat Design studio. “It’s kinda funny,” Davis says, “how the tables have turned.”