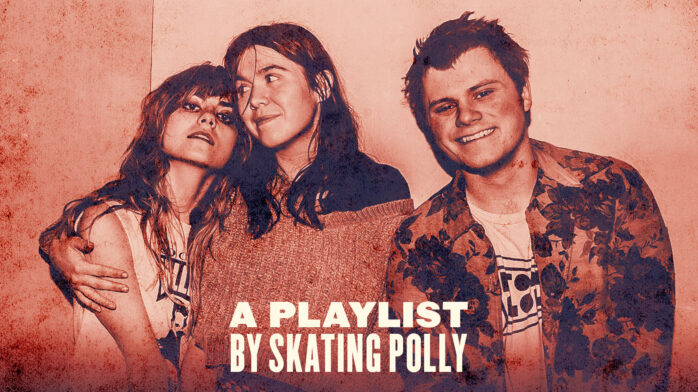 Skating Polly Made Us an Ugly Pop Playlist: Listen

The first time I listened to Skating Polly was when they released the video for their song “Little Girl Blue and The Battle Envy” last year (I’d like to think I’m fashionably late to their party, but I’m probably just embarrassingly, rudely late). I was enthralled by Kelli Mayo’s vocals, simultaneously gritty and ethereal in that distinctly ‘90s rock kind of way—sorry for that passé comparison, but when she sings the words “forty weeks,” I can’t help but think of Tanya Donelly —and by another more inconspicuous detail: the words “ugly pop” neatly written in black Sharpie on Mayo’s white bass. It’s not a term I’d been explicitly aware of, but its meaning clicked in my brain immediately.

“I define it as songs that, at their essence, are poppy and catchy, but are rough around the edges and raw and not scared of being ugly,” Mayo told me over the phone. “I think every band has a really hard time answering the ‘How do you describe your music?’ [question], and I thought that that kind of weird oxymoronic genre title sums it up, and I feel like it gives everyone a pretty good picture. Or it intrigues people, which either way, I’m happy.”

Ugly pop is sort of a nebulous concept. It encompasses a pretty subjective spectrum of ugliness and poppiness and, most of the time, the term can only be applied in retrospect. No one really expressly sets out to make ugly pop (except, obviously, for Skating Polly).

“There have been so many bands that wrote catchy songs [that] had weirdness to them — it wasn’t just straight-forward and calculated… Nirvana’s pretty obvious. I think Folk Implosion, especially their record Dare To Be Surprised, totally captures that thing that I wanna capture — like, kind of off, can’t put your finger on what is off, but kind of catchy in a weird backwards way… It’s kind of something I’m always looking for when I’m listening to music — this weird ugliness, this imperfection that keeps my attention and keeps me going back to it.”

Much of the genre’s roots can be found in the disaffection and general malaise of 80s punk and 90s grunge, so it makes sense that in our era of infinite 90s rock revival, the ugly pop aesthetic is still thriving.

“There are a lot of bands that I’m super into that, I don’t know if they would necessarily call themselves that, but they have this kind of essence that I love. Mitski, Starcrawler, Charly Bliss; this band that we just brought on our last tour, Monster Watch, does these really loud, aggressive, raw punk songs that have good melodies and I love it.”

To canonize the genre, we had Mayo put together a playlist of essential ugly pop songs. Check out tracks from some of the aforementioned artists (and more) below, and let Skating Polly give you a lesson in the brief history of ugly pop.

2. The Raincoats, “Adventures Close to Home”

This song immediately sounds very odd and off-kilter, but it uses that charm to make you listen closer to its sweet pop essence. Their voices are so sincere and pretty but the musical instrumentation is all very rough and ugly in a glorious way.

I think the sentiment of this song is very ugly pop as well as the sound. It’s this kind of backwards love song with irresistible jangle guitars. Fun fact: Gang Of Four follows us on Twitter; I don’t know if it was an accident, but I’m choosing to take the compliment.

[The Breeders] purposely make their songs more convoluted and weird so you have to think; things kind of trip you up on purpose while you’re listening to this amazingly crafted song. This song sounds like it was crafted to mess with your head. The countermelodies and the way the back-up vocals trail in and out… It’s the work of a songwriting genius who could have 10 straight pop songs in her bag on any given day, but chooses to take the longer route so that people have to think when they’re consuming it.

The chorus is so incredibly catchy even though the harmonies are all anti-harmonies. The verses are very melodic in this stream of conscious sort of way. Very hard to learn all the words to, yet when I go to an X show, I’m singing them along with 80% of the audience.

I really feel like [Liz Phair’s] one of those people who is so, so poppy, but specifically those first three records are so weird and dark and have strange things going on in the background. [There are] vocal takes that aren’t 100% on pitch the whole time. Brad Wood’s production style always perfectly captures the essence of ugly pop: “You want it to sound great but not too great, you still want it to be human.” I love how bare this track is and I love the weird talking back-up vocals.

When you can be totally in your face as loud and gnarly as it gets and still have a catchy song on your hands, that’s ugly pop.

I feel like this song could be played on the radio—it has all the components of a smash hit—but it’s just too raw and unconfined. Paul Westerberg’s vocals sound so real and uncontrollable, and even the instrumentation is just too noisy and human to be straight-up pop.

Babes In Toyland is a really good example of [ugly pop]. They’re really hooky; the first time I heard them, I thought it must have been two different vocalists because of the way Kat [Bjelland] can jump from these really sugary sweet vocals to this crazy banshee scream.

I think this one’s obvious — taking a completely cheesy pop song and making it crazy and rough and gnarly and loud and UGLY. Uncontrollable screams singing over calculated pop chords.

All the imperfections being purposefully kept in this song make it ugly pop. The vocals aren’t perfect, but they are always 100% passionate. I have no idea what he’s singing about, but it feels very authentic and you can just tell it means something to him, and that he’s very sincere when he sings it.