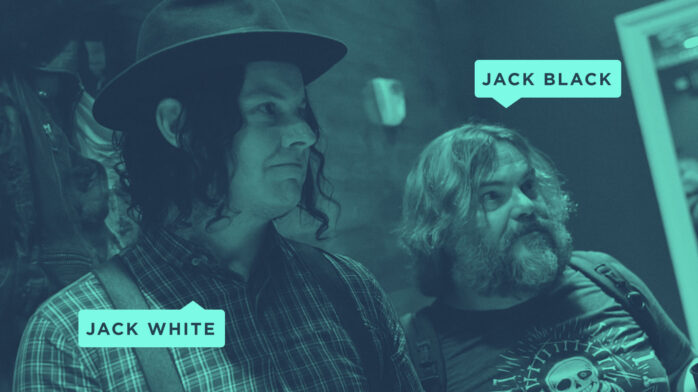 Jack White and Jack Black, two musicians artistically different in what feels like every effort, are uniting in song at long last. After setting the internet ablaze with joy and puns back in June with this photo, the two (well, three) have teased a song collaboration that Black describes as “kickin’ chicken” in a vlog posted to his YouTube Channel.

Last week during Tenacious D’s performance in Nashville, Black told a crowd that he and fellow Kyle Gass had stopped by White’s home recording studio and recorded a new song. He wasn’t kidding after all—the video confirms the collaboration, showing the two getting a tour from White through the Third Man Records headquarters. “This is a legendary collab,” Black teases in the video. “Everyone’s been waiting for it. Now it’s here.”

The cameras stops rolling when they move inside White’s home studio to record, but we can except nothing short of a legendary song to surface from one of rock ‘n’ roll’s greatest jokes. And at the least, Black is enjoying the ride. On his way into White’s house, you can hear him singing an altered version of Michael Jackson’s “Black or White”: “if you’re thinking about being my baby, it don’t matter if Jack Black or White.”