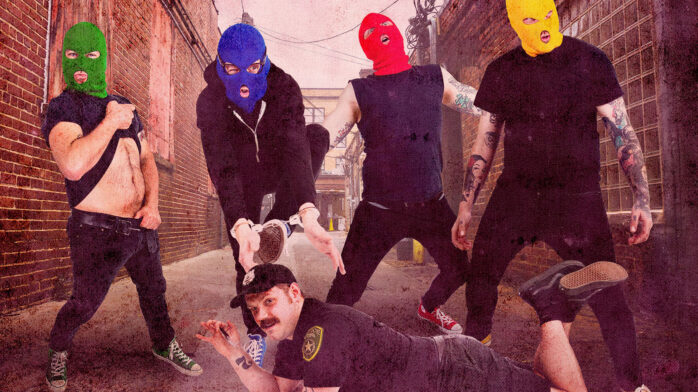 When Masked Intruder re-released their four demos from 2011 as part of their self-titled album on Red Scare the following year, the Wisconsin-based band secured their place as a staple in the midwest pop punk scene with their unique brand of satirical love songs—a mix of comedic, self-aware lyrics and melodic punk riffs. Shortly after the release of Masked Intruder, the pop punk quartet travelled south to make their Riot Fest debut in 2013, where festival goers got their first taste of Masked Intruder’s antics.

Lead vocalist Intruder Blue is hyperaware of the band’s audience and their reputation: goofy, in-your-face punk rockers. He insists though that there’s more to Masked Intruder than what a casual fan might observe on the surface. Blue talked to Riot Fest about the band’s musical evolution over the past six years, the inspiration he draws from classic arena rock, and his friendship with Red Scare labelmates Teenage Bottlerocket and Direct Hit! (who, hey, are also on this year’s lineup).

RIOT FEST: Masked Intruder last played Riot Fest in 2013. How has the band evolved since then?

INTRUDER BLUE: That was right after we put out the first record [Masked Intruder]. There’s a lot of ways we’ve evolved. The first record is always going to be different than the next records, unless you’re one of those bands who just wants to keep doing the same thing over and over.

For us, we’ve really tried to evolve the sound overtime in a way that pushes it as far as we can without betraying the inciting concept. Musically is the main way we’ve evolved; we’ve become better players and played a lot of shows in that interim and put out a couple full-lengths and some EPs. We’ve evolved mostly in terms of trying to push our thing as broad as we can without being weird; we don’t want to try to lock ourselves into this one very narrow sound.

We try to incorporate more influences over time. A lot of what we’re known for is incorporating pop influences; doo wop influence is definitely there, a lot of 70’s rock and pop influences make it into our [sound]. More than other pop punk bands, I think we take a lot of cues from Boston, that arena rock sound is really cool. We try to be as musically interesting as we can, just to keep ourselves interested. At the same time, we try to keep it simple. There’s a sort of special difficulty that goes with trying to make something that is perceived as simple but is actually complex under the surface.

Queen is another big influence on us and more than any other band, Queen’s philosophy is what we try to follow. It’s somewhere between the Ramones and Queen. Those are the two bands we are always thinking about when we go in the studio. In terms of the Ramones, we’re setting out to make a pop record and let the punk rock come out live, more or less. If you look at the Ramones records, the tempos are crazy slow compared to when you listen to live. Queen had this thing where they went over the top and then tried to do more than that. There’s a lot of harmony in the vocal arrangements and a lot of harmony in the guitar leads, so we try to make it as cool as possible but keep it at a level where a lot of people who listen to us think it’s straightforward pop punk, and that’s a little of a sign of success.

If someone saw you at Riot Fest in 2013 and plans to catch your set this year, what changes will they notice in your live set?

We have a lot more songs in our catalog now, so there’s a little more diversity. That allows us to create a set that is more dynamic. As we got used to being on stage, I think we’ve become a lot funnier. People say we’re like a mix between standup comedy and pop punk, and that’s another thing that’s evolved quite a lot since then. We try to be as funny and entertaining as we possibly can.

Without giving away what happens during our set, some of the staples are still there but I think our set is uniquely entertaining. Even if you aren’t into the music, you probably will still have a good time, unless you’re a complete asshole.

You’ve talked about the band’s growth musically, but with your new album, III, would you say the lyrical content has grown as well? As someone who loved your early music, I felt like I still saw the trope of bitter, punk love songs on this new record.

I think that’s right. In a sense, we kind of exist as a satire of the love song that people are used to. People think we’re creepy, and they’re right. Songs about stalking are creepy. But really, if you go back and listen to pop music, and this is definitely true about pop punk, it’s creepy as shit. It’s all about pining for the love of somebody that don’t love you. If you think about it, that doesn’t make any sense; what are you asking for? You’re asking for that person to be a different person? Then in what sense do you actually love that person?

Those tropes and the lyrical themes are pretty much the same, and the way that that actually is realized has expanded. If we start writing songs about politics or something, I think it would just be lame. It would seem like we’re too lazy to do our thing in a new or different way. You’re always going to see the same things from us: basic love songs, songs about doing crime, songs that are halfway between crime songs and love songs, and that’s definitely still a mainstay. Unless I got a traumatic brain injury or something, that could really change your personality. Hopefully I don’t get hit by a car or take a pole through the brain,

How much of your lyrical content is inspired by your own life, and how much of it is you putting yourself in someone else’s story?

I think it’s similar to other bands. It’s derived from our own experience, but it isn’t necessarily about a particular event. You have to extrapolate — try to do something or say something that has universal identifiability. For us, it’s a little more deliberate than the casual fan might think.

There’s a lot of thought that goes into the metaphors we use. At the same time, we make an effort to keep it simple. If you want to write a song, write a song. If you want to write a book, write a book. Those two things are fucking different. Sometimes I get annoyed by political music saying things like ‘government is shit.’ You don’t even know what you’re talking about. If you knew what you were talking about, you’d probably be teaching somewhere instead of making records for 14 year olds. We make sure that every line in every song is worth being there; there’s nothing arbitrary in any of our records, and that’s definitely true of the lyrics. If you read the lyrics to our songs, there’s not a lot there but what is there has a few different layers. We try to have it be funny, be referential, and hopefully thought provoking. I know it won’t hit every fan, but at least some of the fans out there are like, ‘Oh, shit! There’s some meaning here.’

This year, you’re playing alongside Red Scare labelmates Teenage Bottlerocket, Direct Hit!, and Sincere Engineer. How does it feel?

It feels fucking great. First of all, Teenage Bottlerocket and Direct Hit! are really good friends of ours. We’ve got a lot of history together. We’ve certainly played with Sincere Engineer and like that band, but it’s definitely on a different level with Teenage Bottlerocket and Direct Hit!. They’re people we can turn to. Everytime we run across them, we try to hang out. We take a lot of inspiration from both of those bands. If Teenage Bottlerocket hadn’t existed, Masked Intruder would never exist. When I first heard Total, it was like ‘Oh snap, that’s a good way to do pop punk,’ because it came out of what you might call a dark period in the late 90’s, early 2000’s, where pop punk was descending into this shitty, downward spiral of teenage bullshit. It lost a lot of the angst, it lost a lot of the subversiveness that is actually the essence of punk rock. To me, Teenage Bottlerocket reinvigorated the scene.

Why do you think it’s important to have local or regional artists on Chicago-based labels play a Chicago festival like Riot Fest?

If you want to make something good, it behooves you to pay attention to what other people are doing. One of the best ways to do that is to look at your own community, look at what people are doing, and draw inspiration. If you look back in history, the obvious example might be Seattle. Within the scene, one good band crops up the other ones. You have someone you can look at, see all the time, talk to, and who you can learn from. It gives you the power to be better yourself. I feel like having a vibrant local situation is key.

Who are your must-sees this year at Riot Fest 2019?

If I’m 100% being honest, I haven’t even fully looked at the lineup. Every time Riot Fest happens, it’s completely unreal. I don’t know that there’s another festival in the world that consistently has a lineup that is more appealing to me. I’m sure there’s gonna be way more bands I want to see every day than I possibly can. My approach is to get there, go ‘Holy shit!,’ look at the schedule, and figure out how I can make it work. It’s kind of mind blowing what Riot Fest is able to pull together.