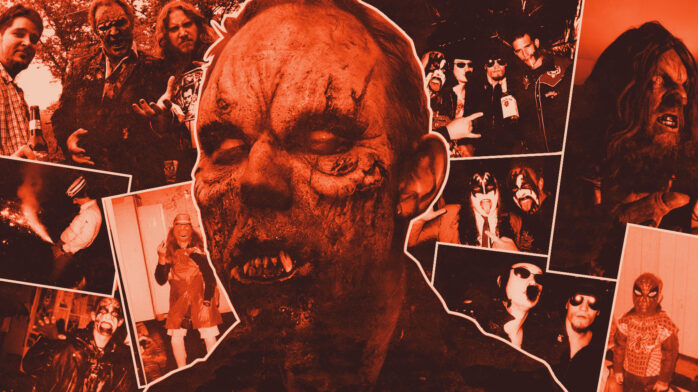 Dave Grohl was long ago anointed The Nicest Guy in Rock ‘n’ Roll. Would the winner of The Nicest Guy in Metal even want a crown so sacrilegious (in an uncool way)? Whether he does or not, Richard Christy—likewise an incredible drummer temporarily overshadowed by a larger-than-life, gone-before-his-time frontman (in this case, Chuck Schuldiner of pioneering death metal outfit Death)—gets our vote. The 45-year-old Fort Scott, Kansas native is not only effusively thankful and polite, but has long embodied a unique dichotomy: the gleefully perverse miscreant obsessed with all things offensively horrific, yet so unironically enthusiastic about his passions, you can’t help but smile approvingly.

Prime example: Christy loves Halloween. As in, all-caps, bold, underscored-666-times loves it. Which may seem a curious choice for a man born on April Fool’s Day until he reveals, “I actually watch John Carpenter’s Halloween only twice a year to make it special: once on Halloween and once on my birthday. So, I pretty much celebrate Halloween on my birthday. I also try to watch the original April Fool’s Day and either Trick ’r Treat or Night of the Demons on my birthday as well, along with [drinking] some Southern Tier Pumking beer that I saved from the previous Halloween season!”

Satisfied that we’re not being hyperbolic? In addition to his annual month-long celebration of the holiday, not only is Christy (still drumming, when time permits, for thrash supergroup Charred Walls of the Damned) contributing all the music for Westchester, N.Y.’s annual Great Jack O’ Lantern Blaze and appearing in recently released horror flick Weedjies: Halloweed Night, but Death’s many iconic cover illustrations are being immortalized as limited-edition Halloween masks by Relapse Records. (While Christy has never seen anyone dress up as underground icon Schuldiner, he proudly reports running into two Halloween revelers dressed as G.G. and Merle Allin. When questioned about the former’s commitment to, uh, authenticity, Christy assures, “I didn’t get any feces hurled at me. He wasn’t cutting himself. He was a well-behaved G.G., thank god, or I would’ve ran.”) Clearly, we couldn’t find a better candidate to share his demented expertise on the most important element of Halloween: fucked-up costumes.

It helps to have a) disposable income and b) notoriety, but nobody would fault Christy for taking advantage of sick hook-ups in this unholiest of months. “My wife and I are friends with these guys Brian Spears and Pete Gerner, who [did the effects for] Stake Land,” he reveals. “They live in upstate New York, so for a few years we were going up to their house on Halloween and they would do this amazing makeup on us. I went there three different times and got made up once like a zombie, once like a vampire similar to the ones in Stake Land and once like a werewolf. One year I won a costume contest and won an iPad, so, it’s like it pays for itself.”

If you lack sufficient funds to hire professional visual effects artists, all you need is a little elbow grease, a lot of imagination… and absolutely zero taste. Christy’s greatest too-soon triumph was “zombie Billy Mays” shortly after the slick-haired infomercial pitchman maybe/maybe-not overdosed on cocaine in 2009. (Drummers, it turns out, are sick bastards: “I remember Tommy Lee dressed up as Payne Stewart, the golfer that was in a plane crash right around Halloween of 1999.”) It should be no surprise that many of Christy’s selections are sick and wrong, ranging from Barney rocking an enormous purple phallus to (ahem…) “horny Waffle House employee.”

“When I was on tour with Death, Chuck and I and Shannon [Hamm], the guitar player, were obsessed with Waffle House,” Christy explains. “We were touring with HammerFall and we got them into Waffle House, too; they had never been there because they were from Sweden. We pretty much stopped at every Waffle House after every show on the U.S. tour, and at every Waffle House, I would ask one of the employees if I could have an item, a piece of clothing. So, by the end of the tour, I had a full Waffle House manager’s uniform. A couple Halloweens later, I stuffed something in my pants and made it look like I had a boner. It was crude and rude and gross. I went to this Halloween night celebration in Tampa, Guavaween; it’s pretty much this debaucherous celebration for adults, so I fit right in with my Waffle House-worker-with-a-boner costume.”

Sensing a theme here? Homespun Midwestern accent aside, Christy is no dummy. “I’ve kind of grown out of that, luckily,” he muses. “My formative cock-costume years, I grew out of.”

Indeed, some would suggest that 45 is way too old to be obsessed with Halloween. But we’re talking about a 45-year-old who was exposed to gory Carpenter classics The Fog and The Thing before third grade, whose saved his allowance all summer to buy masks at Walmart, the nearest “Halloween superstore” within a three-hour drive. (“We didn’t have no Spirit Halloween back then,” he laughs. “It was Walmart or nothing. It was Walmart for everything—all my heavy metal cassettes, all my clothes and all my Halloween stuff.”) So, he’s more than justified to feel no guilt for a little harmless arrested development. “The reason I loved heavy metal when I was a kid is because it was forbidden and people gave me shit for it,” Christy shrugs. “It’s the same thing with Halloween. When people give me shit about still being into Halloween, I like it. I like doing something that most people don’t do, you know? Something unconventional. The thing was, I got even more into Halloween as I got older. When I was younger, I wasn’t able to fly to Kansas City or fly to Orlando to go to Halloween Horror Nights. Now that I’m an adult, I can afford to do that stuff. [Today] Halloween really is geared just as much toward adults as kids with the walkthrough haunted attractions and theme parks doing haunted [events] and things like that.”

Christy’s wife, Kristin (yes, Kristi Christy) shares his infatuation with dress-up, if not metal. They once spent so much time wandering around hopelessly in the “werewolf forest” at famed Kansas City haunted house The Beast that one of the werewolves had to point them to the exit. So, you’ll have to forgive her for checking out when her husband closes the bathroom door, blasts Fatal Portrait and applies the makeup for his lifelong go-to costume (which he’s going to again this year): legendary heavy metal howler King Diamond. Still, [Jeff Foxworthy voice] you might be a maturing metalhead if you have to reconsider the upside-down crosses strewn across the frontman’s face.

“Now that I have a 2-year-old son, I might have to make… not a Christian cross, but not an upside-down one—probably have to make it right in the middle so I don’t freak some of the other parents out,” Christy admits. “Actually, this year I think I’m gonna do the Conspiracy makeup. I haven’t done that one in a few years. It’s harder to do than… the Mercyful Fate-era King Diamond makeup. I think [Conspiracy] might be the one that got him sued by Gene Simmons, so I better make sure I’m not trick-or-treating at Gene Simmons’ house.”

While the Christys let their son run amok at a Spirit Halloween store before deciding on a perfectly age-appropriate and tasteful Ghostbusters costume, dear old dad holds out hope for a more depraved future. “I’m sure one day, if he wants, I would be the proudest dad ever if he wanted to dress as Little King Diamond, like King Diamond, Jr., and I was Big King Diamond. [Laughs] But I’ll wait and let him make that decision.”