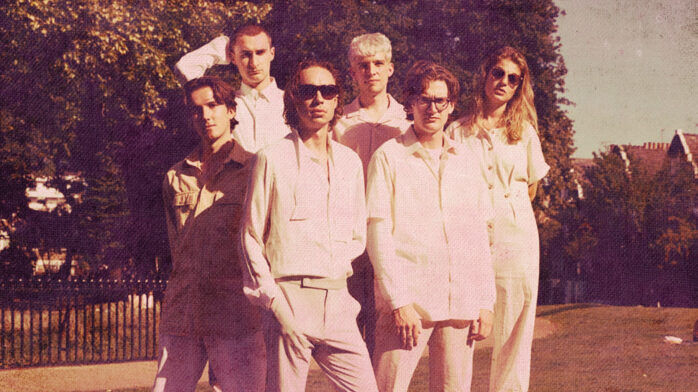 One Mean Halloween: A Chat With Sports Team

“None of us are musicians,” Alex Rice dismisses. It’s a line that stood out to me as one of the more surprising admissions during our phone call; Rice, the frontman of Sports Team, is undoubtedly a musician. But he’s more concerned with putting on a good show—one that sends a signal farther than just the fancy fretwork on display.

It’s a good way to sum up Sports Team, a group made up of six Cambridge schoolmates who’ve made quite a name for themselves amidst a new wave of British post-punk acts. Over the past two years, the band has managed to sell out some impressive shows and release a steady collection of songs, albeit just short of releasing a full-length LP. Most notably, the group has racked up attention for their energetic live shows; you’d be hard pressed to find Rice himself sitting still for a performance. Now that energy is heading towards the U.S. with Making Hay, the band’s first U.S. release.

Ahead of a special Halloween show at Cobra Lounge (the band’s first-ever stop in Chicago), Rice had some time to spare for a quick chat about Making Hay and the group’s October 31 plans with Riot Fest ahead of the gig.

RIOT FEST: How many shows have you played so far on this tour?

That’s a throwback to high school for me, Two Door Cinema Club.

Yeah, I was amazed: they seem to have got this increasingly young fan base, which is bizarre. I thought it would be old boys in the crowd, but instead it was 18 year olds rediscovering it. It was cool.

Have you guys played in Chicago before?

Not in Chicago. We’ve been to the US a few times. South by Southwest was the first time. We went in March, then we did a very small tour. We did some dates in New York and LA after that, but not Chicago, sadly.

How different do the shows feel in the States?

I think they’re great. I think we’re always slightly… our lyrics and our points of reference are very English. But we’ve always coupled that with a very American energy. A lot of the bands we like are Parquet Courts, Twin Peaks—they’re from Chicago as well, aren’t they?

We love all those bands—Modern Lovers, Iggy Pop, stuff like that. So I don’t think we sound that alien to crowds out there. I think people get it, you know?

You probably get this a lot, but you’ve got an Iggy Pop meets Talking Heads thing going on with your vocals.

I hope so. I think that kind of music seems to have an ambition to it. I think—in the UK, at least—music’s slightly going back in its shell again, in the world of guitar music at least.

How did you start singing?

How did I start singing?

Yeah, what got you specifically into doing vocals?

I don’t know. I don’t think I really see myself as a singer, to be honest. I see myself as a performer, like a showman or whatever it is. None of us are musicians, we just happen to be in a band. [The way] we got into it, we were all at university together in Cambridge and we put on little house parties and things like that. All our mates didn’t really want to listen to guitar music. It’s not really that bad, but it’s not that cool a genre at the moment. Pop music is big, house music is big—the grind’s a lot bigger in London. So you always had to do more to get them down to the gigs: put on a performance, build this whole night around putting on your little show.

If you come to see us, it’s always been about the after parties we’ll put on and this whole scene around it. I think we’ve always seen ourselves as entertainers because we get that it’s quite indulgent; people don’t want to see four entitled blokes get up on a stage and go, “Wow, guitar music, exciting.” Whereas everyone else in every other genre put so much more in than just performing, if you know what I mean.

Going off that—being a “guitar band”—you guys have been name dropped quite a few times as part of some big indie revival over in the UK. Do you buy that? Does it feel like there’s some sort of revival going on?

I think you see the problem. I think we’re reviving, we’re popular, but I think you’ve got this tendency [where] guitar music has always been a bit middle class; it’s very self congratulatory. Get a couple of award nominations, end up selling out a pretty big venue, but ultimately nothing that competes with pop acts—nothing that’s traveling the charts, or the singles at least—and everyone pats themselves on the back and goes, “Brilliant, guitar music’s coming back.”

But I think that if you look at a lot of what the revival comes down to, it’s a very post-punk sound. It’s Idles, and Shame, and Fontaines D.C., bands like that who we love. But they do this pseudo-political, quite angry stamps on things—it’s always like discordant music—and I think we get grouped with that a lot because it’s often just who we come off playing with, this group of new British bands that are obviously doing really well. But I think what we are is a more romanticized, poetic school of things. I think we’ve tried to take these very prosaic aspects of our lives and romanticize them—we do prosaic characters too.

You guys just had a new EP come out, correct? How much has that writing style played into your newer stuff?

Yep, Making Hay. That EP’s only coming out of the US really, it’s almost a greatest hits from the first couple of EPs we put out in the UK. It’s got that driving energy, but what it keeps doing is exploring the political and quite satirical scenes by doing it through these characters. Like, “Kutcher” is not about Ashton Kutcher, but it’s trying to capture the sentiment that this guy is not quite right, or he gets a bit overly angry and doesn’t quite become the person they want to be. That’s the way we’ve always addressed things.

Do you guys all still live together?

Six people in one house… Are you guys sick of each other yet?

[Laughs] We all get along. We’re pretty good at fighting, but we just fight in a nice way. If something’s wrong or someone’s pissing you off, you just really call people out on it pretty quick and just get it out rather than letting it fester within you or just being a bit dick-ish for quite a while. That’s what we do, we find our way. We’re actually a lot happier on tour, to be honest. When you’re playing gigs, it’s almost feels like exactly what you’re supposed to be doing. It’s when you’re in the studio or trying to rehearse in a little box for weeks at a time that things get a bit frustrating and boring, but if you just keep playing gigs, it’s brilliant.

You’re playing in Chicago on Halloween. With Halloween In the UK—it sounds to me like it’s one of those holidays that some people celebrate, some people don’t. Do you usually celebrate?

I think everyone [here] looks at it a bit ironically. You do it as a kid—I remember going trick or treating and all that as a kid. Maybe I’m completely misinterpreting what it is in the US: a family holiday, like a get together? It’s Friday night anyway and you’d go out, but you might wear a costume for it. It’s a bit chilly, you do it a bit half heartedly, and that’s part of the fun of it as well. In Britain you do everything half heartedly really, and that’s just part of the appeal. But yeah, people celebrate it for sure. We’re excited for the Chicago show. We’re going to dress up.

Do you have a costume in mind? What have you dressed up as in the past, any favorite costumes?

I’m thinking the Joker for Chicago. We haven’t done necessarily scary stuff, but this one party I went to you had to go as someone else at the party, if that makes sense. You have to dress up as your mates and try and pick their worst traits.