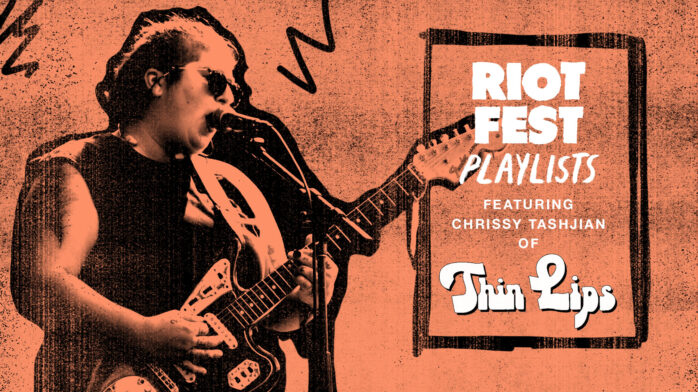 “With the world being what it is right now, I just want to do a good job,” Chrissy Tashjian begins. Tashjian, songwriter and vocalist for the Philly-based punk group Thin Lips, is speaking about her anxiety surrounding creating a playlist of her favorite songs.

It’s a personal endeavor, much like her songwriting. The group’s thoughtful, experimental punk style is ripe with raw honesty, reflected in how Tashjian curated her playlist—though she simplified what must have been a tough process. “I just picked songs that mean a lot to me right now and that feel powerful and good,” she says.

Take a listen to Tashjian’s playlist presented with her thoughts on the collection of empowering songs and cherished indie favorites.

CHRISSY TASHJIAN: Oh my god, she’s a queen. She’s super-confident, like fat-positive angel. I am very inspired by her all the time.

RIOT FEST: And she plays the flute.

She’s incredible. I saw this really funny interview with her where she was like, people think that that is a marketing ploy, but she was like, who would want to admit to being that nerdy? Surely no one.

Do you feel there aren’t enough songs that promote positive messages for girls?

I think that there are a lot of songs that promote positive messages for girls, for sure. I just feel that one specifically has this trans-inclusivity feeling that I really like. That’s beautiful. Don’t get me wrong, we live in a patriarchy for sure. But I think that women are also very powerful and there is a lot of content for women by women.

[“You Wouldn’t Like Me”] just speaks to my own sense of insecurities and internal dialogue all the time. As much as I try and keep my head up sometimes, I think everybody has this internal dialogue that sometimes is really negative. It’s something that we have to try and overcome constantly. But that’s why I love that song, because it’s so catchy and it’s such a fucking bob, but it’s like, “You wouldn’t like me if you knew what was inside me,” and it’s so real. I like The Beths a lot. I think they write super-catchy songs, but I really relate to her sense of low self-esteem at times.

I don’t know too many people who are completely happy about everything in their life.

It’s a constant struggle. I know people that are very happy people. I’m a happy person. But I’ve got self-esteem issues and confidence issues like everybody else. I’m trying to figure it out; do a better job, be nicer to yourself all the time.

The Zombies are great. They were right after the Beatles and they released this album [Odyssey and Oracle] that this song is on that’s super beautiful. It’s so amazing, and it kind of flatlined. They didn’t have the response that they thought they would, post-Beatles. Then 15 years later they blew up, but they went bankrupt. They were an amazing band that just plummeted. I like the sense of hope from this place of despair. The whole song is really sweet and positive, but there’s this idea that, “Why is this our year?” Like, “What’s happened?”

Isn’t that song so sweet? I love Endless Mike, he’s a good friend. And I care about him so much. It is such a coming-of-age punk song, which I really like. It’s like: “Uh… getting older now, and having real conversations about real feelings.” And everybody you know is getting married and having kids, but like, “These are not my values right now.” It was just funny. I mean Mike does have two kids and they’re beautiful. And an awesome wife. That’s another comfort song for sure.

5. Belle and Sebastian, “The Boy With the Arab Strap”

I mean, what do you pick when they’re all so good? I almost picked “Seeing Other People”’ cause I really love that little ditty; “We all know you’re soft cause we’ve all seen you dancing / We all know you’re hard cause we’ve all seen you drinking from noon until noon again.” I very much relate to that line. I feel both of those things very much. He’s an incredible storyteller.

Is it hard for you to come up with a new story for a song?

No, it’s not hard for me. I just have a hard time with words. Sometimes I get stuck in my own head.

That’s a very old song. I was their live member for their last album. I went out with them for three U.S. tours, and then we went to Europe. They’re a great band. It’s almost like a Hop Along B-side. All their songs are amazing, but it wasn’t a hit or anything. It was a very creative wacky song from their first full-length record. I love it, and especially the aria at the end, about my friend and my enemy and about how everybody’s a little hard to love sometimes.

Frances Quinlan’s voice is so unique.

How do you seek out new artists?

I love that… that riff. It’s so good. It’s so weird. It’s just a banger. I don’t even know what the song’s about. It seems like a love song. I fucking love that tune. I’ve never looked up the lyrics. I only know that one part that’s like, “We’ll defuse bombs, run marathons / We’ll do whatever together.” Oh my God, that’s so sweet. And then they come in with that riff, like, hit me with it, and I don’t care what the rest of it has to say.

Do you go through phases where you just listen to comforting favorites?

Yeah, one thousand percent. It’s really hard for me to find space to get into new stuff, especially cause I’m trying so hard to get into new stuff in other parts of my life, and music is so personal to me that I have a much harder time. It’s so easy for me to listen to new podcasts, read new books, see new movies, new TV shows. But when it comes to music, it just feels really, really personal.

I love those kids. Do you know them? They’re incredible queers, and they’re great humans and they inspire me. Jac [Walsh] is really amazing. When I was coming out there wasn’t accessible, queer music and so I fell into these other habits. Jac was like, “well, you know, with everything, my life has just been queer.” So much of the queer community spends so much time—they call it being a persnickety queer—leveraging themselves above each other and making each other feel uncool or outside. It’s just about not repeating toxic patterns.

They’re just buds. We did a tour with Slaughter Beach, Dog. They’re just the kindest, most wonderful dudes. And when I hear Jake [Ewald]’s music I feel pumped and happy, and I just care about them so much. It’s so sweet. There’s something so nostalgic about all his music and I think he just really nailed it on this one.

Really great friends. Thin Lips just went on tour with them. This last year, Lou Hanman [on guitar] has been playing with us and then, for this last tour, my friend Lauren Adams [on keys] came out with us. We sang this song with them every night and we harmonized with Georgia [McDonald] and it was really beautiful. This tour was so special to me.

They just have incredible politics, an incredible sense of humor. They’re like great humans who fight for the things that they need, fight to get their needs met all the time and people have constantly underestimated them. They’ve constantly, just been strong, incredible humans. They’re huge in Australia, and they’re pretty big in the states. This tour was pretty great.

Is this a playlist you might play first thing in the morning?

Something that comforts me wildly is knowing that people are making important art that speaks to people, like “Dump Him.” Like Lizzo. I have a really hard time creating music in the world cause it’s like, “Well, who the hell am I?”

The world is insane right now. I feel the older I’m getting, the more I’m having a hard time putting music out because it feels like I don’t want to take up space with that, because of all these conversations that people are having all of the time that are really fucking important. So I think the political aspect of it comforts me. And then the other half of it is comfort music by people that I love and cherish. Sometimes Belle and Sebastian feel like I know my heart.