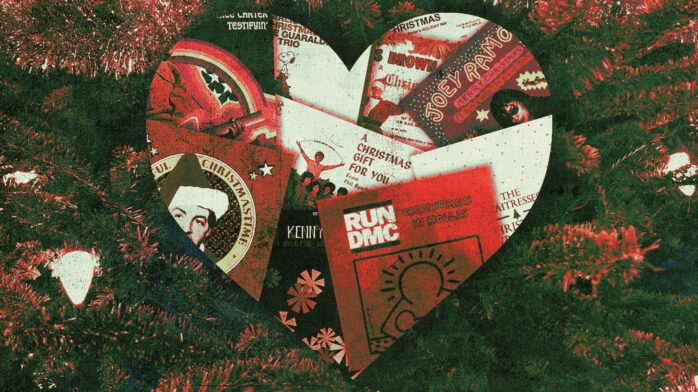 From Naughty to Nice: How I Learned to Stop Worrying and Love Christmas Music

So, you hate Christmas music. I totally get it, and I was once like you. Things, however, have changed.

Some personal context: I grew up in a very small, very white, very lame midwestern town, and I learned to hate Christmas music at a young age. It was part of the corny shit you had to endure to get presents and candy, and it stopped having positive connotations shortly after I realized Santa Claus was (SPOILER ALERT) a big sham.

I don’t/won’t have children, so the vicarious second wind that new parents get around Christmas and its associated paraphernalia isn’t in the cards for me. I am not a Christian, and I’m sure as shit not some reactionary dickhead who believes there’s some kind of “WAR ON CHRISTMAS” going on.

Since moving away from my hometown nearly 20 years ago, I’ve had to work retail jobs through several holiday seasons, holding back vomit all the way. I’ve cursed the heavens every time I’ve turned on the radio after Thanksgiving and heard “Jingle Bell Rock” or a smooth jazz take on The Nutcracker Suite. I have known the taste of hot, bitter hatred that rests on so many of your palates this time of year.

There were always exceptions to this blanket disdain, of course. Anyone who hates Vince Guaraldi’s music for A Charlie Brown Christmas is a straight-up demon. I have no problem with Mariah Carey’s “All I Want For Christmas Is You,” but I favor the 1960s Christmas pop records that Carey was aping even more—in particular, Phil Spector’s explosive production and arrangement on Darlene Love’s “Christmas (Baby Please Come Home)” is among his best, to say nothing of the magic of Love’s voice. The Waitresses’ “Christmas Wrapping” is also pretty undeniable for any new wave sympathizer. More controversially, I’ll cop to being a longtime fan of Paul McCartney’s “Wonderful Christmastime,” which I recently saw described aptly as “the first chillwave Christmas song.”

For a long time, that short list was about the sum of it for me. As I got older and softer, a couple more exceptions slowly crept in: jazz guitar legend Kenny Burrell’s buttery standards LP Have Yourself a Soulful Little Christmas, Clarence Carter’s funky and lascivious “Backdoor Santa” (itself the primary sample source for another solid one, Run-DMC’s “Christmas in Hollis”), and obviously, most of James Brown’s holiday efforts.

The first major crack in my armor, though, came after the release of Jingle Bell Rocks!, Mitchell Kezin’s loving 2013 documentary about Christmas music collectors. Though the people profiled in the film were down a rabbit hole too nerdy even for me—I own significant stacks of novelty records and private-press organ music, so believe me, I don’t have room to pick on anyone—the film really sold me on the social, historical, and emotional value of what they do. Maybe Christmas music had something good in it, after all!

Recognizing that there is a vast underbelly of enjoyably oddball, subversive Christmas music is one thing, but that’s not the same as actually liking Christmas music as a whole. What about the songs you’re forced to hear every time you buy groceries this time of year? “Silver Bells,” “Do You Hear What I Hear,” “Winter Wonderland”… all that stuff is hopelessly unlistenable, right?

Maybe for you. For me, though, the final step in what has been a slow, shocking personal transformation was stumbling on an article, The Jews Who Wrote Christmas by composer Rob Kapilow, awhile back. Kapilow lays bare an integral but little-discussed key to appreciating modern secular Christmas music: a great deal of these songs were written by Jewish immigrants, and subtly reflect the pain of people who had escaped unspeakable horror and were yearning for a comforting, mainstream American idyll always just outside their reach. Seen through this lens, the somber, reaching minor chords of Irving Berlin’s “White Christmas” no longer seem so maudlin, its sentiments no longer saccharine. Sure, it’s a song which has been driven well into the ground for decades, but buried just beneath it is the deep ache of the outsider.

I’m getting older (I’m in my late 30s), and with age comes a certain sappiness, a sentimentality. Some of us hide it better than others, but we all carry it. This, no doubt, accounts partially for my letting down my Christmas music defenses. I think there’s more to it, though.

This is, in many ways, a terrifying time to be alive. I won’t go into specifics, since I come to this topic with no political, moral, or environmental motivations, but we’re all subject to different kinds of trauma, to dread both deeply personal and dauntingly global. We subscribe to all kinds of spirituality, or lack thereof, to cope with these difficulties.

Maybe you don’t celebrate Christmas, or are even repulsed by the idea of doing so. That’s fine. All of our experiences are different. However, what I’ve recently found in this music—which I used to loathe so much—is a heretofore-unnoticed striving for something universal, a balm for the pain of holiday stress, harsh winters, and loneliness. Whatever else you may say of it, it is not callous or cynical music, and though it’s ostensibly about a holiday rooted in Christianity, it’s not exclusionary (though, of course, I leave room to respect those for whom this music may be triggering, due to their feeling excluded as a result of the holiday or its associated religion). Hell, like I said, most of the music’s composers weren’t Christians themselves!

That, and if you turn off your need to be cool for a minute, it just sounds fucking good. Most Christmas music of the last century simply isn’t designed to address religious concerns or foster gross consumerism; it is only designed to feel good, to whomever allows it to feel good for them. As it turns out, I am now one of those people. I like Christmas music.

That said: “Jingle Bell Rock” is still grating as hell, and if I hear it on the radio again this month, you better believe I will rip that receiver out of the dashboard and throw it in the river. I may be a sentimental sap, but even I have my limits.

BONUS: Here’s a playlist by the author which encompasses his love for Christmas music, from the remarkably normal to the outright weird. Feel free to use it at your holiday soirée, but proceed at your own risk!