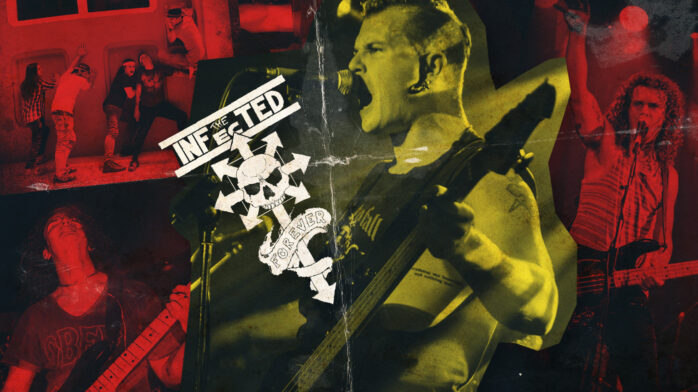 The Infected on Getting Back Together Nearly 10 Years Later

It’s 2012. Buck Foley, a talent buyer for Riot Fest, is running back and forth from the stage to his job. Not only does he work for Riot Fest: he’s playing the festival too.

Foley works day-to-day working on the festival and booking the year-round club shows at venues of all sizes across Chicago—but for this Saturday’s show, it’s an extra special gig for him. Amidst the many reunions of Riot Fest, Foley is now ready to book his own: The Infected, a band he played bass in nearly 10 years ago—an irrepressible force of punk, metal and all things fast—is getting back together for a reunion show at Cobra Lounge.

Luckily, we got Buck Foley to sit still enough for a quick interview ahead of the gig.

State your name and your role in The Infected.

I’m Buck Foley and I do the bass playing in The Infected.

It’s my understanding that you came to meet Riot Mike though this band. Could you share that story?

So in 2009 Myspace was very much still a thing. Mike had four Riot Fests under his belt already, and it had become somewhat of a big deal for all of us in the local Chicago punk rock scene. Mike sent the band a message on our Myspace account asking if we were available to open up for Leftover Crack and The Casualties with Trash Talk at Metro. Of course, we were beyond stoked for the opportunity. He sent me his number and told me to call him about it, so I did. He mentioned something about how important it was to promote the show and I agreed wholeheartedly.

We plastered the area with color posters and flyers we printed at Kinkos, then sprayed glue on the back so they weren’t going anywhere. I remember seeing some of them up around Wrigleyville for over a year after the show.

Had you booked shows before you were in a band? How has it helped you as a talent buyer?

I mean, I’ve been playing in shitty bands since I was in middle school, so no. Any show I booked was for a band I played in. There may have been an instance or two where I booked another show that didn’t include my band as a favor, but I don’t recall anything specifically.

I think it’s helped me as a buyer because I understand the importance of making a band’s day easier and making them feel welcome and comfortable. That goes a long way. Life is just a series of feelings. People remember how they felt playing a certain gig.

You’ve been at Riot Fest for seven and a half years—what made you guys want to get back together now?

It’s an idea we’ve been throwing around for years. Every once in a while we’re text each other or get together and be like, “It would be sick to play a show again!” But two of the guys are dads, two are touring musicians, and I’m me. Scheduling is impossible. For example, we had to change the date on this show from when we initially wanted to have it—we also won’t have practiced for six weeks before the show due to the guitar players being on tour. We’ll still be passable. I promise.

What’s changed, and what feels familiar?

There have been a couple of different lineups of the band. People switched around instruments. Hell, I’m not even an original member! The other four are, though. The biggest thing that’s changed is that we’re all older now and doing our own things. Last time this iteration of the band played together was in 2008. When we had our first practice back together it was a little rusty but by practice two we sounded better than we ever did back in the day. We’ve got nothing to prove. We’re doing it for fun and it has been so much fun!

You guys played Riot Fest in 2012, when (I believe) you were also working the festival. Was that… chaotic?

We also played in 2010 and 2011. But yes, that was incredibly chaotic! I was only doing artist running that year, but for some reason the day we were playing was super busy. I was stressed out of my mind trying to coordinate with the guys while doing my job. After about a minute into the set, it was fine. I remember Fishbone was playing at the same time as us. We hired our own sound person, April McDane (RIP), and she pushed the system to the limits. After the fact, people who were watching Fishbone told me they could hear us over Fishbone across the field. Sorry, Fishbone!

One last question: in the iconic cover artwork for your 2012 EP The Party, you’re pictured almost completely naked—except for a pair of sneakers. This seems a bit odd, considering you were just socks and shoes away from going full nude appearance. Was the decision to wear sneakers for the photo shoot an error, or a conscious artistic choice?

You can catch The Infected—alongside TurboVamp’s last show, Blood People, and The Kreutzer Sonata—on Saturday, December 21 at Cobra Lounge. Grab your tickets here.