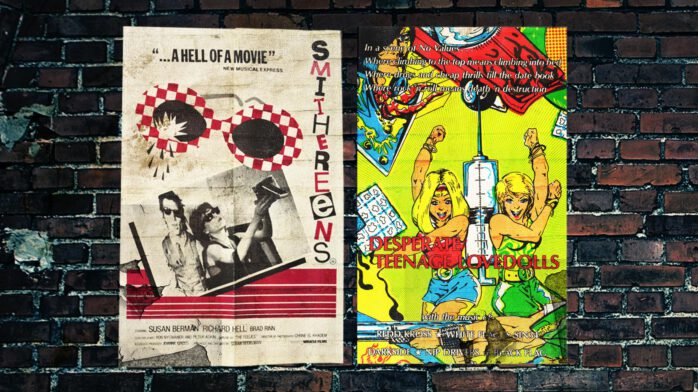 Punk Rock Movie Night is a series we handpick two precious gems from the vast and mysterious world of “punk rock films” for you and your dumb friends to enjoy. Get some snacks—we’re gonna have a TV party tonight.

By most accounts, punk at its outset was a diverse, queer, and artsy subculture, and one kinder to women than the rock & roll culture at large. Regressive attitudes still crept into the scene—sometimes in the form of self-aware contrarianism—but it was still an improvement.

Early hardcore’s macho violence would put a wrinkle in this version of the punk narrative, but the spirit of the initial movement never fully went away. Instead, the diversity of the early punk scene went on to inform the myriad other “post-punk” sub-subcultures which sprang up starting in the late 1970s.

Some of the best films centered around punk from this time recognized that the stories of women in the community were often the most interesting. For this week’s double feature, I’ve picked a couple such movies, one from each coast. They’re wildly different, but both crackle with some of the same energy.

New York punk was largely history by the time Susan Seidelman released Smithereens, her first feature—but our heroine Wren (played by Susan Berman in one of her only acting credits… a shame!) doesn’t know that. Even though she’s late to the party, Wren is hungry to break into the scene by hook or by crook, using whoever she meets along the way to help realize her vague dream of managing a band, being in a band… basically, whatever it’s gonna take to keep her from going back to New Jersey.

Smithereens is a nuanced, warts-and-all character study that’s almost definitely based on observations from Seidelman’s own experiences. Wren is street smart and tough, but never quite as much as she thinks she is (a familiar song to any punk who made it out of their twenties). She fancies herself world-weary, but she’s more of an innocent than she lets on; hell, you’d have to be to not see right through would-be rock star Eric (played with pseudo-Nouvelle Vague cool by actual rock star Richard Hell), to whom she attaches herself despite a wheelbarrow of red flags.

Whenever her non-relationship with Eric is going sour, Wren bounces between friends’ apartments and small town expat Paul (Brad Rijn), who somehow survives living in a van in Hell’s Kitchen at perhaps the sketchiest time in modern history to do so. When Eric convinces Wren that LA is where the real rock action is happening, she takes it as an invitation to follow him there, but can never quite get the liquid assets together to do so. Actually, all she really has is some stolen sunglasses and a tiny portable TV, and the latter is probably broken.

Seidelman, who went on to direct Madonna in the similarly charming mistaken identity caper Desperately Seeking Susan, imbues Smithereens with artful grace, undeterred by the small budget and inexperienced actors at her disposal. Likely unable to afford a conventional composer, Seidelman also tapped nervy Jersey art-punkers The Feelies to write what is likely among the earliest punk rock feature film scores, a tightrope walk of anxious aggression and teeth-clenched restraint.

In the end, this scrappy risk-taking paid off: Smithereens was a critical hit, and the first American independent film invited to compete for the Golden Palm Award at the Cannes Film Festival.

Far sillier and more self-aware than Seidelman’s take on punk rock womanhood is Desperate Teenage Lovedolls, an equally honest representation of the scene which birthed it. The look in New York, at the time, was to prove that you were both gritty, scary, and artistic; Smithereens captures that perfectly. In Los Angeles, the most punk way to live was to simultaneously laugh at and ironically embrace the trash decadence all around you, and in that regard, Desperate Teenage Lovedolls might be the perfect Los Angeles punk movie.

Co-written by director Dave Markey (later of the superlative Sonic Youth/Nirvana tour doc 1991: The Year Punk Broke) and star Jennifer Schwartz, Desperate Teenage Lovedolls is basically a lo-fi Super-8 spoof of “a star is born” movies like Valley of the Dolls. Kitty (Schwartz), Bunny (Hilary Rubens), and Patch (Janet Housden) are the titular group, a ragtag bunch of no-account nihilist rockers who beat up their moms, break out of mental hospitals, and get in fights with rival gangs. When they’re not busy fucking shit up, they’re forming a rock band that will take over the world. Unsurprisingly, as they climb their way to the top, they leave a trail of destruction in their wake— and just as unsurprisingly, pride comes before the fall.

Sure, it’s a sight less realistic or artful than Smithereens, but maybe that makes it more punk? Whatever be your take, Desperate Teenage Lovedolls is cheap, campy, and hilarious. Redd Kross (who, as tween/teen garage snotrags turned expert rock & roll chameleons, are perhaps the band most aesthetically in line with Markey’s rock & roll vision) provide most of the music, and the band’s core brother duo Jeff and Steve McDonald even act in the film.

As exaggerated as the band’s wanton criminality may be, what Desperate Teenage Lovedolls realistically captures is how much fun it is to be an all-girl group of troublemaking best friends. The drama is all played for laughs, and the band’s eventual fall is the funniest of all.

One could easily argue that Desperate Teenage Lovedolls is not as carefully considered or “important” a film as Smithereens, but saying so shouldn’t be seen as a slight towards either film. Both are equally great punk films, and both are equally reflective of the world from whence they came.

Smithereens is available on Blu-ray, DVD, and streaming from The Criterion Collection. In keeping with the established contrast between these two films, Desperate Teenage Lovedolls is available for free on Youtube, uploaded by the director himself.