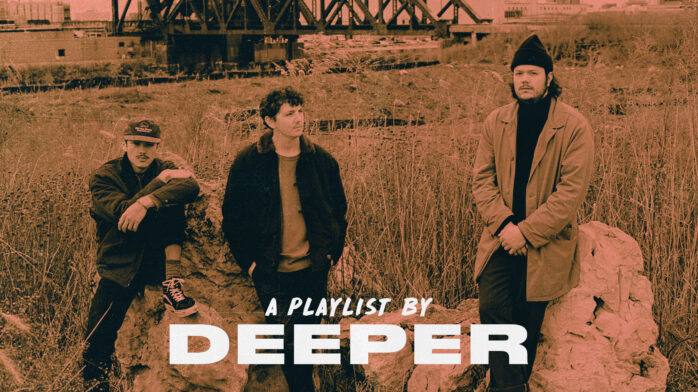 Deeper is Staying Indoors (But Still Made Us This Playlist)

The Chicago group’s sophomore record Auto-Pain is out today; Hear a playlist of their favorite Riot Fest bands below
By Bailey Davis / March 27, 2020 / Features, Playlists

I first saw Deeper at Lincoln Hall’s Tomorrow Never Knows fest back in January, a lifetime ago. I was hooked from the moment I first heard “Pink Showers”—a track so catchy it’s almost unfair—and was thrilled to find out the single was a born and bred Chicago gem. Not even a minute into their set, a guy next to me leans into his girlfriend and starts yell-whispering in her ear, in what seemed to be a picture-perfect recreation of this viral treasure. “Chicago has such a great post-punk scene,” he spat.

“It’s effectively become meaningless,” guitarist Drew McBride answers to the term “post-punk.” He agrees that it gets slapped on a bit too often, comparing it to other overworn buzzwords like “indie.” Around their first record, he used the phrase “angular rock” to describe the group’s guitar-pointed sound. Singer/guitarist Nic Gohl’s girlfriend, on the other hand, likes to use the phrase “dream-punk.”

Call it what you will, but to me, Deeper has all the makings of a quintessential “Chicago band” if there ever was one. In the studio, the group is a tightly-packed dresser drawer, a machine with every cable labeled and catalogued; live, the quartet’s energy is borderline unforgiving in its rigor and fury. Some of Chicago’s other DIY alumni—Twin Peaks and NE-HI come to mind—were similarly described as must-see acts known for putting on wildly energetic live sets. With their sophomore LP Auto-Pain, out today via Fire Talk Records, Deeper is more than ready to meet the moment.

But there’s one bump in the road: their tour plans have all but vanished in the wake of a worldwide pandemic. They had been touring Europe for six weeks (in support of the aforementioned Twin Peaks), en route to the East Coast for a string of South by Southwest dates, when the first wave of tour cancellations hit the United States in response to the outbreak of COVID-19. “It felt like it was finally kind of happening for us,” McBride says, looking back. “Not to say that it still isn’t, but rescheduling those dates is pretty devastating. I can’t help but feel for the people that have it so much worse off than we do, though.”

It’s nearly impossible to ignore the extraordinary circumstances surrounding the record’s release. Even during our phone call, we were interrupted by an emergency text about the city’s lakefront and parks shutting down to enforce social distancing measures. For Deeper, getting off the road is a neutered feeling—an unexpected blend of leftover stress and light relief. “We’re still gonna make it work, but at the same time, it’s still a huge bummer.” McBride settles with. Gohl, on the other side, had a sliver of comfort in flying back home: “I had food poisoning on that drive, so I was pretty happy that we were going home at that point. Worst 14 hours of my life.”

Roadblocks aside, it’s nowhere near a complete loss. The lack of shows, for one, have been met with an outpouring of record sales online, no doubt bolstered by efforts like BandCamp’s 24-hour waive of revenue share last Friday (which, in turn, raised $4.3 million to artists in a single day). “The community that’s surrounded this band has been very helpful the past two weeks,” Gohl says. “I feel like the online community has really stepped up to push not just our band’s, but a lot of other bands’ records.”

None of the triumphs of Auto-Pain have been diminished, either. Deeper has nailed every requirement of a proper sophomore record, doubling down on the unshakeable riffs and poignant lyrical content of 2017’s Deeper all while adding a new field of synthesizers and “looping textures,” as McBride calls them, to the mix. “We had this idea where we’d have a record that was a patchwork of different ambient and noise sections that tied all the songs together. All of the textures ended up as full-length songs.”

The topic of mental health dissected in Auto-Pain—“the overwhelming feeling of everything at once,” as the band describes the title’s meaning—feels especially relevant amidst an unprecedented interruption of American life and our cycles of self-care. “Being on social media, you have all these mini outrages,” McBride says. “All these horrible events keep happening in such rapid succession that you don’t have any time to process one before you’re onto the next one.” Likewise, the ongoing pandemic would unexpectedly fit the bill of Auto-Pain’s themes: “This record just gets realer and realer as it lives,” Gohl laughs. “It’s kind of frustrating.”

With a little extra free time on their hands, Deeper made us a playlist of their favorite Riot Fest bands to keep those stuck at home with plenty of listening material. I’d be remiss, though, if I didn’t tell you to give Auto-Pain a listen first.

NIC GOHL: 2007 was the second Riot Fest I attended. At the time, my best friend was obsessed with psychobilly. Naturally, he dyed his hair black and cut it into a pompadour.

NG: Yeah. I was a freshman in high school and I was in a ska band. This band called The Massacres played that year—I met the guitar player and he gave me a CD.

NG: My first introduction to Bad Religion was from my oldest brother Ryan. He came home from the mall one day with a t-shirt with a cross crossed out—the Bad Religion design. This shirt blew my mind and pissed off my parents, basically the coolest shirt I’d seen at this point at 11 years old.

NG: Though I didn’t attend Riot Fest in 2014, my girlfriend and I lived down the street and listened to The Cure’s set from our porch. A couple years later we finally saw them at their 40th anniversary show in London’s Hyde Park.

DREW MCBRIDE: My uncle turned me onto Pixies when I was a kid and they were crucial to me getting into music. “Debaser” was the first song he showed me, and it’s such a sick album opener. It really sets the tone for the rest of Doolittle.

RIOT FEST: I feel like no matter what new music I’m getting into, I eventually revert back to listening to Doolittle like, three times a week for a month.

NG: Modest Mouse have been a huge influence on me since I was in high school. In fact, I tried to get that same friend who wore a pompadour into them. Unfortunately, he was unimpressed, leading to an argument and me throwing the CD out the car window.

KEVIN FAIRBAIRN (Bass):  I saw them at Riot Fest in 2013. I always loved the Tobin Sprout songs, they’re strummy and have this hopeful longing that’s just different enough from Pollard’s songs. When you’re listening to a GBV record, there’s gotta be one song you play two or three times in a row. This has been that song about as often as any other.

NG: A lot of people associate New Order with more of their club-y songs, such as “Bizarre Love Triangle” or “Blue Monday.’’ I personally have always leaned more towards the Peter Hook songs, especially “Dreams Never End.” This I would have to say is the best album opener for an artist’s debut record. Case closed.

NG: I remember when the video for “Closer” came out. It used to scare the shit out of me, but I couldn’t turn away. The snare tone throughout the song is, and will forever be, my favorite drum machine sound.

NG: Liars are definitely my desert island band. Every record they evolve so much, but stay Liars at the very core. “WIXIW” is definitely one of those albums that shows the depth of their songwriting from “The Exact Color Of Doubt” to “Brats.”

DM: These pictures from their performance at Riot Fest 2018 always stuck with me, that was a really cool hometown show. Their idea to release a bunch of singles throughout 2017 was a dope idea and “Tossing Tears” just hits so hard live. Everyone in the crowd goes nuts when they drop back in after the rest.

NG: You know, they’re a few years younger than us. When we were coming up in the DIY scene, I remember playing with them and it was like, “Oh, a bunch of high schoolers are going to be playing with you. This is going to be kind of weird.” And then my 21-year-old ass is looking like a fucking idiot, ‘cause these kids are just turning out the crowd. I’d never seen one of my friend’s bands do something like that. And now they’re doing phenomenal. I’m glad to call them my friends.

Auto-Pain is out now via Fireside Records.
You can grab a copy of the record here.