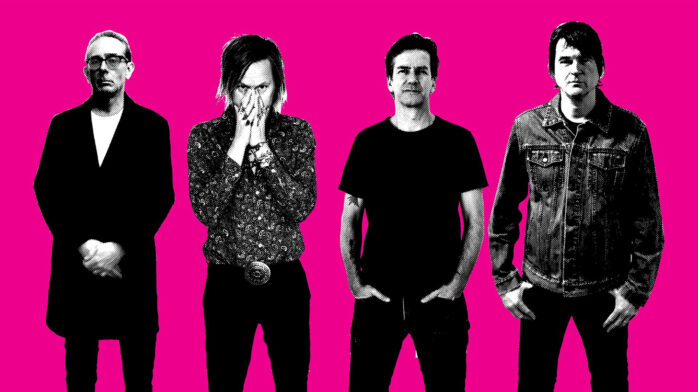 We were already excited about the new supergroup Fake Names just off the strength of who’s involved: Brian Baker (Minor Threat, Dag Nasty, Bad Religion), Michael Hampton (S.O.A., Embrace, One Last Wish), Dennis Lyxzén (Refused, International Noise Conspiracy, INVSN), and Johnny Temple (Girls Against Boys, Soulside). Like seriously, if you just strung together every record these guys played on you’d have a pretty comprehensive overview of the past 40 years of punk.

But we’re infinitely more stoked to find out that Riot Fest played a not entirely insignificant role in the band’s formation. According to the official press release announcing the release of their self-titled debut, due out May 8 on Epitaph:

Fake Names first came to form in early 2016 when Brian Baker and Michael Hampton met up at Hampton’s Brooklyn home to play music together, with no intentions beyond possibly writing a song or two. Friends since first grade, the two guitarists ended up writing a handful of songs that day, and then closed out the session with a spontaneous decision to start a band. When it came to finding a bassist, Baker and Hampton looked to Johnny Temple, a fellow classmate from their elementary school. Later that year at Chicago’s Riot Fest, both Baker and Temple were struck with the sudden inspiration to recruit Refused frontman Dennis Lyxzén as their singer.

So when the album drops and your mind gets blown to little bits, be sure to thank not only the legendary architects of modern punk who actually made the music, but the people who are arguably the story’s real heroes: us. You’re welcome.