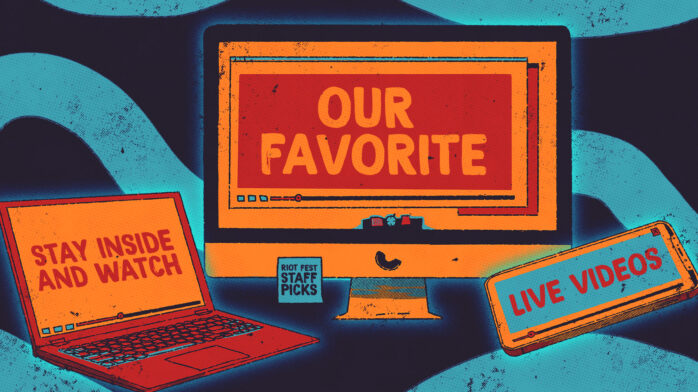 Staff Picks: Stay Inside and Watch Our Favorite Live Videos

We miss live music. Something about erasing a calendar filled with gigs feels wrong. For the time being, though, there’s plenty of artists live-streaming acoustic sets, sharing archival footage, or even just revisiting past favorite performances. We’ve put together a short list of what the Riot Fest staff has been watching from the comfort of their couches.

While spending more time at home and practicing responsible social distancing during these strange times, I have found myself never missing an installment of “Metallica Mondays” on Metallica’s YouTube channel. Every Monday evening at 8:00 p.m., the band streams a concert video from their seemingly endless live archive in glorious HD. The video is preceded by a short intro from drummer Lars Ulrich live via quarantine. As a die-hard Metallica fan who celebrates their highs (all the early stuff through …And Justice for All) as well as their lows (The 2003 Some Kind of Monster documentary), I think everything that comes out of Lars’ mouth is unintentional pure comedy gold, and he doesn’t disappoint while introducing these archival concerts.

The concerts are a blast to watch, warts/questionable St. Anger cuts and all, and they are a testament to not only Metallica’s enduring presence in our culture and in music, but also their cardiovascular endurance capabilities. Two straight hours of Metallica songs performed by men well into their 50s is really something to behold, and it may inspire you to turn off the TV for a little while and get some cardio in once the final notes of “Enter Sandman” have faded away. ‘Tallica loves you, baby.

I don’t have much to say about this video other than the moments of pure joy witnessed on this little boy’s face at 3:00 and and 4:03 overwhelm me to tears. I’m literally weeping as I type this.

I’ve been watching a lot of live videos lately in lieu of all the concert tickets I can’t use anymore, but the one I keep circling back to is this performance of “Uncontrollable Urge” by DEVO. It’s just a crank faster than the album version and always makes me clean my apartment just a pinch faster. It’s from the short-lived Fridays comedy show and comes with all the bells and whistles of a great televised performance: the awkward pre-show interview, the shaky church-broadcast camera work (don’t miss the crew members scrambling behind the band at 1:25!), the corny lights that flash to the snare hits. It feels like the greatest high school talent show performance ever—except instead of the popular girls dancing to “Cotton Eye Joe” or some god awful annoying song eternally damned to exist on Now That’s What I Call Music! comps, it’s the kids from the AV Club. It’s DEVO.

For the longest time I was convinced that the best ever early-80s Misfits live show taped for Michigan cable public access had to be the 1983 show taped for a Detroit punk show called Why Be Something You’re Not, and widely bootlegged under the same name, which is how I discovered it at a horror geek convention at an O’Hare hotel. The band is ferociously tight, the crowd is the platonic ideal of Midwestern punk on the cusp of hardcore, the production quality is almost shockingly professional (even if the video technology of the time gives the picture a beautifully blown-out quality), and there’s a part where Jerry Only says hi to his mom.

But recently I discovered the show taped at the Eagles Lodge in Kalamazoo on 9/26/82, and I’m suddenly not so sure. It’s clearly not as well made as Why Be Something You’re Not. For one thing, it’s shot with a single camera positioned behind the crowd, and since most of the band is playing on the floor you can’t see what they’re doing half the time. (Although from what you can see, they’re clearly killing it.)

But my initial annoyance at the camera work quickly transformed into an obsession with the audience blocking my view of the band. Who’s the couple who spend half the set with their arms around each other, and why does the girl walk out halfway through? Who are the normie-looking dudes hanging out at an Eagles Lodge watching a bunch of demonic New Jerseyites with weird hair sing songs about aliens and necrophilia? I don’t know, but I’m obsessed.

The only thing I ever watch on YouTube is Russian dash cam car crash videos.

Welp, as the resident Riot office musical misfit, I’ve been watching weekly broadcasts of my favorite jam bands. I know, I know. You can stop reading here if you want, but I at least tried to make it a fun read. These can all be found on easily on YouTube, though I doubt anyone reading will bother to search.

Tuesdays: Phish’s “Dinner and a Movie”—More shows from the archives. Option to cook the recipe they post on their website while you watch the show, or if you’re sad like me, just eat another bowl of cereal.

Wednesdays: The Disco Biscuits—JK, I only watched this one time, and it was specifically so I could talk shit about them with my friend. Hey, not all jam bands are made equal. This one sucks more than you think they all do.

Thursdays: Nothing I care enough about to watch, and if I don’t care, you definitely don’t.

Fridays: #WineNot with Brendan Bayliss from Umphrey’s McGee—This one usually devolves relatively quickly into a debaucherous Zoom session with my closest friends. We’ve swapped “too many tequilas” at the concert for “waaaay too much wine” at our houses. Saturdays have been rrrrough—guess some things have stayed relatively normal.

Bet you didn’t think you would see a Ukrainian polka band, with a Spanish name, performing a German song today. But here we are. Half-clothed, playing the kazoo, and probably slightly drunk—it feels like a crystal-ball look into my quarantine future.

Since I’ve really been missing shows, I’ve been watching a lot of bands play from inside their house. Makes me feel like a one person audience and it’s a great way to watch a band you may be missing. If you can’t see them in person, might as well watch them from your couch. This video is one I like a lot simply because I miss Green Day.

I’ve always liked this performance and it seems like an appropriate time for this tune.