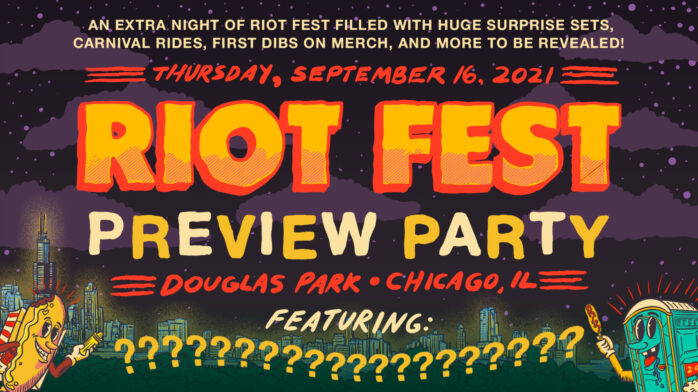 What the Heck is a Thursday Preview Party?

We know the wait for Riot Fest is going to be a bit longer now (469 days, to be exact). To show our appreciation for those of you hanging onto your tickets—or for anyone who buys a ticket by July 16, 2020—we’re inviting you to our first-ever Thursday Preview Party, an event specially designed as a huge thank you to fans who stick with us until next year.

We’ll open the gates a day early on September 16, 2021, for anyone eligible. Inside, you can catch special performances, shop around our vendors, take your honey on a romantic Riot Fest picnic, take the first dump in one of our port-a-potties, you name it. Just don’t brag too much when your friends show up on Friday.

Here’s what you can expect at Riot Fest’s inaugural Thursday Preview Party:

Surprise sets from mystery bands. If you were with us when Riot Fest was an indoor festival, you know that we throw a killer surprise party. You can expect to see some sets that will earn you bragging rights. Don’t look at the lineup for any hints, though—one of the bands will be a Thursday exclusive, meaning they won’t play the rest of the festival!

Carnival rides. Not to mention carnival food! Great for anyone who’s been to Riot Fest before but never made the time to ride the rides. Get on the Ferris wheel a night early and scarf down as much fried goodness as you please.

…And more! What do you want to see at our Thursday Preview Party? Let us know on our socials and we’ll take it into consideration. Maybe.