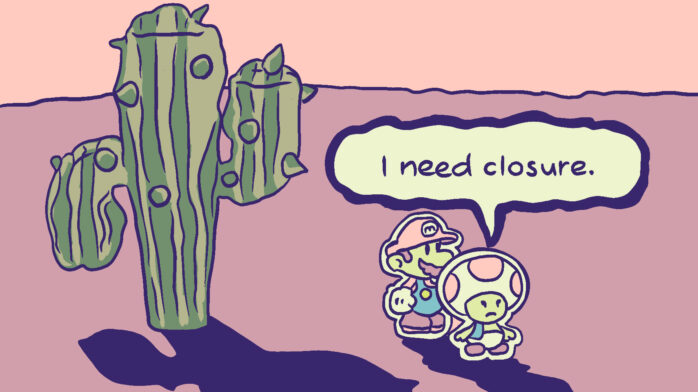 Someone at Nintendo clearly loves Morbid Stuff as much as we do
By Riot Fest / July 24, 2020 / Video Games

Last Friday saw the release of Paper Mario: The Origami King, the latest entry to Nintendo’s Paper Mario series—and it looks like someone over at Nintendo is a huge PUP fan.

As PUP drummer Zack Mykula excitedly pointed out via Twitter, there’s a section of the game where a Toad says three lines referencing the band’s 2019 album Morbid Stuff, and more specifically the tracks “Free at Last” and “Closure.” The band later tweeted out the in-game references.

Came back briefly to Twitter to ask if we're being punked? I am legit in love with this game and if this is NOT a coincidence it might be the coolest thing ever to happen to me. Mario, like for many, is my childhood. pic.twitter.com/qPnhOThfP1

Anyone familiar PUP probably has seen (and adored) the music video for “DVP,” in which several classic video game characters belt out the song’s lyrics—so it comes as no surprise that the nod from Nintendo is a huge honor for the band.