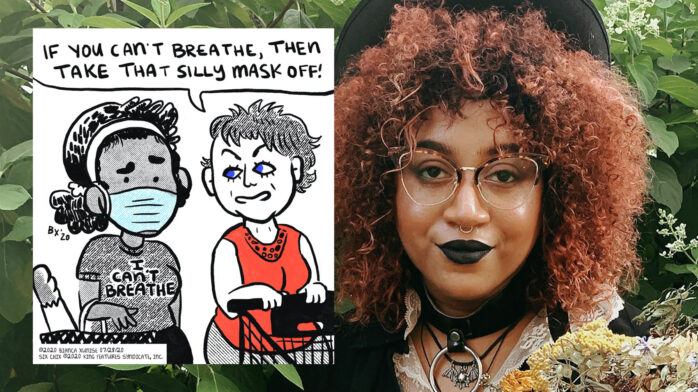 Stand Against Censorship in Comics

Black lives matter. Wearing a face mask in public is the only way to slow the pandemic that’s raging across the United States like it is in no other affluent nation. To most of us, these are basic, obvious facts, but since America currently seems to prefer wishful thinking and Internet rumors to facts, a lot of people think these essential truths are somehow up for debate.

Award-winning Chicago comics artist Bianca Xunise found out just how much Americans prefer fantasy to reality when she put out a comic last week that says volumes the intricate relationship between privilege, race, and public health in a single panel. When it went out to the 120 or so newspapers who publish the Six Chix comics syndicate she’s a member of, the comic touched off a wildfire of controversy, ranging from the usual social media hate to censorship by papers that either issued apologies for running it, or flat out refused to print it in the first place.

Here it is, the comic that launched 1000 angry responses. Please clap pic.twitter.com/Cy42h8mlMB

The combination of head-in-the-sand delusion, unexamined privilege, and refusal to hear what black people have to say about the state of their country on the negative side of the response is about as America 2020 as it gets—which is probably why the story’s been picked up by mainstream news outlets across the country.

“Right now I’m pretty drained,” Bianca told us in an email after a week in the spotlight. “Normally if I had a viral moment I could step away and go work at a cafe, release some energy through kickboxing, or in the pit at a show. Now with COVID- 19 and practicing safe social distancing, I feel a little trapped with all of this feedback. I’m trying to exercise healthy ways of unplugging but when social media is all we have to keep in contact with one another it’s hard to tip-toe around.”

Despite all the attention the media’s given to the backlash against the comic, Bianca says that the positive feedback she’s received outweighs the bad. “The response has been interesting but mostly kind-hearted,” she says. “It’s ranged from trolls just harassing me to another person who wrote me a song about it. My mom always tells me I have a tendency to look at the negative and maybe that’s just the goth in me because I definitely did receive more love than hate.”

We’re lucky to have Bianca as a contributor here at the Riot Fest, using her singular talents to share unbelievable stories from legendary goths and making a convincing argument that a black female gospel singer recorded the first punk song in 1945. You can get to know her better through this profile, and enjoy all her Riot Fest contributions here. If you want to support her further, she says the best way is just to follow her on social media, where she’s @biancaxunise on most platforms.