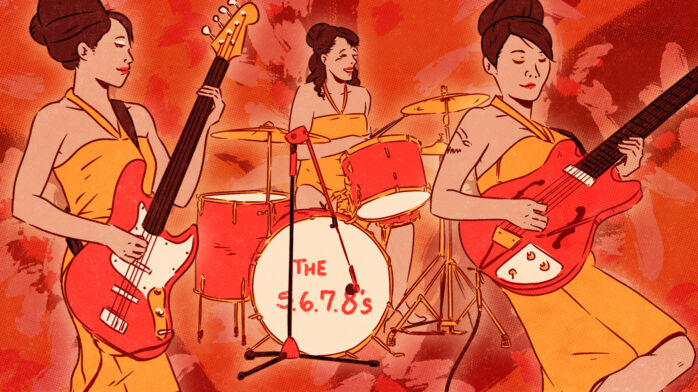 You’d be forgiven for not recognizing the name The 5.6.7.8’s. It is so generic and obvious that it either has to be that of a band that was a forgotten pioneer of its genre, or a decades-removed campy mutation of one. The 5.6.7.8’s are sort of both.

Chances are, you’ve heard their music. I’m sure their cover of The Rock-A-Teens’ “Woo Hoo” in that Vonage commercial from the mid-aughts is just waiting to jail-break from the darkest corner of your subconscious. Or maybe, if you were lucky enough to not spend so much of 2004 watching Pimp My Ride repeats on MTV, you might just remember their cameo in Kill Bill Vol. 1.

A refresher: Uma Thurman (as the The Bride, the “deadliest woman alive”) struts into the Tokyo izakaya in which Lucy Liu (O-ren Ishii) has posted up with her elite squad of fighters. Soundtracking her entrance is a beehived and—wink, nudge—barefooted trio playing that same cover, their jangly guitars ironically foreshadowing the imminent carnage.

While the band may have looked as if they’d sprung from Tarantino’s head fully formed and shoeless, they hadn’t. Sisters Sachiko and Yoshiko “Ronnie” Fujiyama started the garage rock revival group in Tokyo in 1986; with Ronnie on guitar and Sachiko on drums, the pair settled on Akiko Omo as their bassist in 1991. It’s the same lineup the band has maintained for almost 30 years now, excluding a moment in the early ‘90s when they featured Eddie Legend on guitar—who, as their sole male member, would usually wear a wig to blend in better on stage. (He’d eventually leave the band to form all-guy garage rock outfit MAD3.) The band has cited American acts like The Shangri-Las, The Ronettes, and The Ramones as inspiration, and most of the songs they’d cover were by classic American garage bands, save for their take on the 60s instrumental “Let’s Go Boogaloo” by Japan’s premier surf rock pioneer Takeshi Terauchi.

After building a solid live following in Japan, they released a handful of cassettes and EPs through the early ‘90s. In 1994, they released their self-titled debut LP via the Japanese label Timebomb Records. According to Tarantino’s longtime music supervisor Mary Ramos, the director discovered the band for himself when he heard the record playing at a secondhand clothing store in Ebisu, Tokyo. With his signature brand of I-want-that entitlement, he went over to the guy behind the counter and asked if he could buy the CD off him right then and there; the guy finally obliged when Tarantino offered him twice the retail price.

It’s not hard to understand how someone could be so captivated at first listen. The band’s musicality on that debut is so tight and true to its source that their original songs are often indistinguishable from their covers. One, “I Walk Like Jayne Mansfield”—which would eventually be recorded again for the movie—features the band vamping over simmering and snapping instrumentation, totally committed to the bit. There’s an obvious, conscious campiness inherent to songs like “Arkansas Twist” and “Tallahassee Lassie” being covered with thick Japanese accents, but even stronger than the irony is the band’s dedication to their schtick. So much so that it barely even comes across as such—it’s just rock & roll.

The 5.6.7.8’s pre-dated the American garage rock revival by a few years; they seemed to employ less of the self-aware cuteness of April March, or the goofy irony of bizarro Veronica-Lodge-core bands like The Trashwomen and The Bobbyteens who dominated the Bay Area in the mid- to late-’90s (and with whom they shared a label, Estrus Records, for the vinyl 7” of “I Walk Like Jayne Mansfield”). Their closest contemporaries were probably fellow throwback girl group The Pebbles, who formed in Japan not long after them, but never seemed to garner the same respect—one of the few English language resources on them claims, “With The Pebbles there’s always the sense that they don’t quite know what they are doing,” as if they’d formed a band and released five or so albums by freak of fate or something. While the 5.6.7.8’s adhered pretty closely to the traditions of garage rock, they managed to maintain a singular voice despite it, and subsequently became something of a flagbearer for the revival at large.

After their musical debut, and before their celluloid one, the band released a string of EPs and albums, most of which are not available to stream in the U.S. According to a 2019 interview with Louder Than War, their Kill Bill cameo had little effect on their popularity at home. But, once “Woo Hoo” experienced minor explosion in the States, they started touring North America and in the process befriended artists like Jello Biafra and fellow garage-revivalists The White Stripes. With the help of the latter, the band eventually released their discography in the U.S. through Jack White’s Third Man Records and more officially globalized their reach.

Still, when you Google the band, the Related Searches tend to not be other Japanese, or even Western garage rock groups—rather, it’s Lucy Liu and the other actresses from the izakaya scene, Julie Dreyfuss and Chiaki Kuriyama (aka, the iconic blood-weeping Gogo Yubari). Their cover of “Woo Hoo,” which is undoubtedly what they’re best known for Stateside, appeared on their 1996 EP Bomb The Twist; as they told Louder Than War, they’d never considered the song a particularly important part of their oeuvre until their performance of it in Kill Bill almost 10 years later. So I guess the Sliding Doors moment of this story is: If the guy working at that Japanese thrift store hadn’t chosen to play The 5.6.7.8’s that fateful day Quentin Tarantino popped in, “Woo Hoo” might’ve never been permanently seared into the brains of all TV-watching Americans in 2004 and beyond. Feel about that however you will; I just hope Vonage paid them handsomely.

We’re screening Kill Bill Vol. 1 this Friday, September 11 at Riot Fest At The Movies. Come join us for a night filled with fireworks, snacks, and exclusive merch—tickets are on sale now!