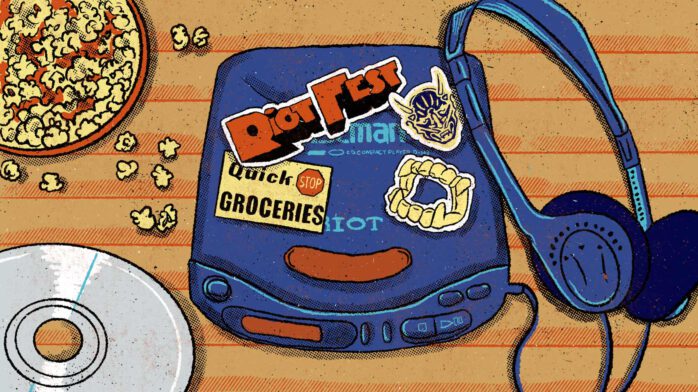 Riot Fest At The Movies: The Soundtrack

The slate of films we’re screening for the Riot Fest At The Movies drive-in spectacular is all over the place, tonally and stylistically. There’s low-budget slacker comedy, angsty 80s-goth horror, an epic revenge flick that makes slicing people up with a katana look like the coolest thing in the world, and a queasy psychedelic meditation on violence by possibly the greatest filmmaker in history. What can we say? We like variety.

One thing that all our flicks have in common is the way music is woven into them. The Clerks soundtrack is a snapshot of alternative rock in 1994, where major labels thought the Jesus Lizard and Girls Against Boys could be shaped into MTV stars and Stabbing Westward looked like the next big industrial rock crossover sensation. The music to Kill Bill Vol. 1 matches Tarantino’s epic widescreen vision by mixing the funky 70s deep cuts he’s famous for with vintage film scores by the likes of Ennio Morricone. The Lost Boys nailed the early-80s mood in when California punks swooned over imported British goth (best captured in Echo & the Bunnymen’s sad-boy take on the Doors’ “People Are Strange). And Kubrick’s vision of A Clockwork Orange shaped punk as much as any band, while synth pioneer Wendy Carlos’ electro-classical score only gets more influential with each passing year.

We’ve gone ahead and picked some of the best cuts from all four of our music-loving features and put them all together on a playlist for you. Enjoy it while you get ready for the safely socially-distanced feel-good cult movie drive-in event of the year.

RIOT FEST AT THE MOVIES: THE SOUNDTRACK