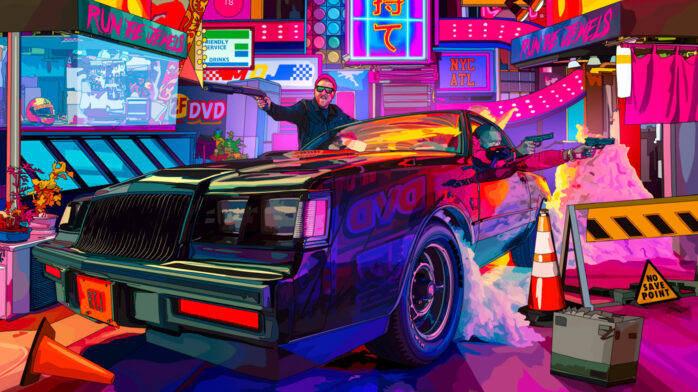 Run the Jewels are back with another new track—not off this year’s excellent RTJ4, but from the upcoming RPG Cyberpunk 2077. Watch “No Save Point” below.

Cyberpunk 2077 is probably the most anticipated game of the past few years, undoubtedly somewhat due to the stellar lineup of guests: Keanu Reeves plays the frontman of a legendary punk group that Refused wrote an album’s worth of material for; Grimes voices the frontwoman of a band called “Lizzy Wizzy and the Metadwarves.”

Run The Jewels, naturally, are a great fit for a dystopian cyberpunk adventure. Shortly after releasing the track, El-P thanked the team at CD Projekt Red:

“Huge shout to @CyberpunkGame for giving us an excuse to write about a terrible, morality free, technology-horror riddled future that isn’t quite happening already. Felt refreshing.”

You can expect a collection of merchandise later this year from Killer Mike and El-P that will combine RTJ’s imagery with Cyberpunk stuff.