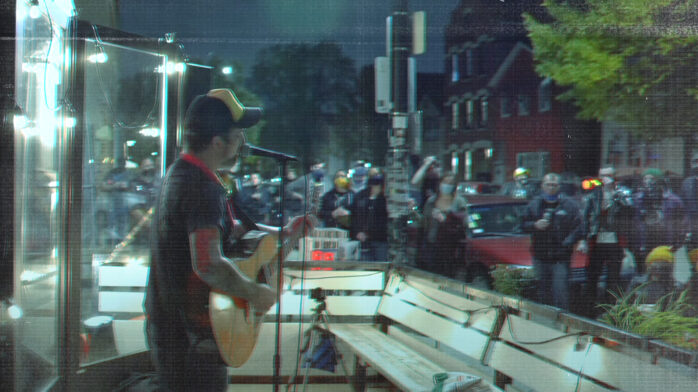 A socially-distanced outdoor gig mixed with crowd interviews—including a first-ever performance of “Belly of the Whale”
By Riot Fest / December 2, 2020December 2, 2020 / Premieres, Videos

Anyone who’s looking forward to our sixth-annual War On X-mas show (hosted virtually this year, of course) is in for a treat today. Last month, Lawrence Arms do-gooder Brendan Kelly played some socially-distanced outdoor shows, one of them being filmed right outside of Thalia Hall. We’ve got a sweet video of Kelly’s performance, mixed with some on-the-street interviews by the guy himself, that you can watch below.

The footage includes the first live performance of “Belly of the Whale” off The Lawrence Arms’ latest release, Skeleton Coast, which came out this past July. The footage is paired with Kelly talking to those in attendance about what everyones’ quarantines have looked like. All in all, it’s a nice little 7-minute treat for anyone missing live music lately, and we think you’ll enjoy it.

Brendan Kelly described the experience to us below:

The South Side of Chicago: known for many things, bad bad Leroy Brown, rapid gentrification, some real deal takes on Chicago dogs (the Mother-in-Law, anyone??) and tavern-style pizza. One thing it’s NOT known for is being a place where I have played a lot of shows, and yet, there I was, on the South Side, walking around like some kind of lunatic and then nervously performing the first live show I’ve done in almost a year, outside, to a socially distanced crowd sprawled across a street that was, weirdly, not closed down.

The South Side: If the virus doesn’t get you, the cars that drive right through the middle of the audience of the show will. It was great times. Love me some Thalia Hall. It’s beautiful. Love to play inside sometime. Wear a mask.