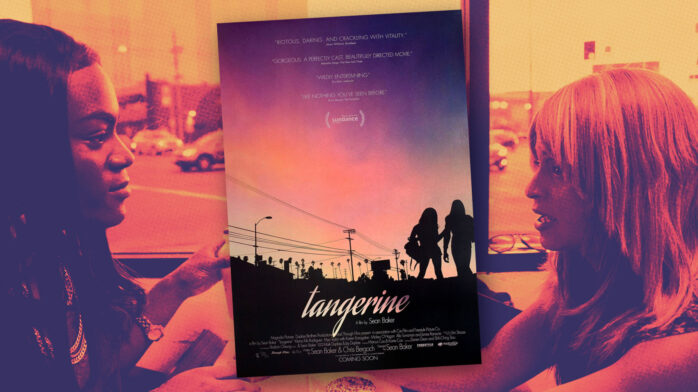 Why Holiday Viewings of ‘Tangerine’ Should Be a Yearly Tradition

Some movies, like Home Alone or A Christmas Story, are shoo-ins for “holiday classic” status from the jump, but leftfield contenders like Die Hard? Perhaps less so. The latter sort are rarely viewed as part of the canon right away: the trajectory usually starts with some pop culture-obsessed smartass remembering that this or that movie takes place around Christmas, after which they write about it, host public screenings, make YouTube videos, etc. where they attempt to convince a larger audience that their movie of choice deserves Classic Christmas Movie status. With a lot of pushing and a little luck, sometimes it spreads, and a tradition is born.

With that in mind, I guess it’s time to throw my own smartass hat in the ring, and say that Sean Baker’s excellent 2015 film Tangerine belongs in your holiday traditions, right next to stocking stuffers and eggnog. This wasn’t an obvious choice from the outset, even to me: like Die Hard, it takes place in sun-bleached Los Angeles (albeit a very different, much more realistic LA than that of Die Hard), not exactly your archetypal Christmas setting. It’s acknowledged throughout that the film’s events take place on Christmas Eve, but when you’re watching the frenetic story of a transgender sex worker (Kitana Kiki Rodriguez) traipsing down Hollywood Boulevard exacting justice after being made a cuckquean while in prison… well, it’s easy for the holiday cheer to get lost in the shuffle. The fact that the whole film was shot on a souped-up iPhone, while remarkable, also draws attention away from this important consideration.

Subsequent viewings, however, reveal that not only is the time of year relevant to Tangerine’s story, it’s essential to the crux of the film, and yields its most resonant moments. However it shakes out in real life, the idyll of Christmas is one of togetherness and love, wherever one may find it; losing sight of that, in favor of fleeting and selfish concerns, is a big part of what gets most of Tangerine’s characters in trouble in the first place.

Not that you’ll find any Hallmark Channel moralizing here. Tangerine makes it hard to judge any of its characters too quickly; for all its unbridled energy, it’s one of the more nuanced films of the last decade, bested by few (save Baker himself, in his remarkable follow-up The Florida Project). Its characters are all complex and challenging, frustrating but sympathetic.

The film’s two central characters, Sin-Dee Rella (Rodriguez) and Alexandra (Mya Taylor), comprise (to lift a willfully pretentious phrase from the Poochie episode of The Simpsons) a classic dramaturgical dyad: think Ren & Stimpy, Laurel & Hardy, etc. The stoic, centered Alexandra is constantly trying to slow Sin-Dee’s manic roll as she tries to chase down her pimp/boyfriend Chester (James Ransone) and Dinah (Mickey O’Hagan), the cisgender woman with whom Chester has been fooling around. The film goes most off the rails when Sin-Dee and Mya go their separate ways; Alexandra needs Sin-Dee’s confrontational nature to help preserve her personal shield, and Sin-Dee needs Alexandra to keep her from getting too deep into trouble.

Meanwhile, Armenian cab driver Razmik (Karren Karagulian) is entwined with both Alexandra and Sin-Dee, a clandestine client who works to hide his sexual desires from his wife and family even as they overcome him on Christmas Eve. He’s preoccupied with being a “white knight” for both his family and the sex workers he frequents, at least partly as a way to assuage the guilt he feels for leading a double life. The emotional knots that Razmik, and indeed viewers, find themselves in at the movie’s climax are among the film’s most complex.

Selfishness and dishonesty on nearly everyone’s part, from Razmik to Chester all the way down to Alexandra, are the source of the film’s core conflicts. Honesty wins out in the end, and Sin-Dee’s honesty throughout reveals her to be Tangerine’s conscience, as opposed to simply being the raging id one perceives early in the film. Characters who’ve refused to be honest end at an impasse; those who embrace honesty find love and safety—yep, the Christmas spirit—when they need it most. Tangerine is in no way a preachy film, but its moral compass is carefully calibrated.

This, more than the time of year and its jarring juxtapositions (Christmas decorations in sunny southern California never cease to be disconcerting), is what makes Tangerine a great Christmas movie. For all its grit and intensity, it’s at heart a story about friendship, honesty, and doing right by your people. Like It’s A Wonderful Life or A Christmas Carol, it appeals to our highest values.

I don’t suspect that this would be the year that many families sit down together around the fire, unwrap presents, and watch Tangerine together, even if this were a “normal” year. Like I said, these things take time. Still, if a silly and amoral (and don’t get me wrong, deeply entertaining) film like Die Hard can find a place in the holiday canon, then a true-blue exemplar of the Christmas spirit like Tangerine deserves a chance, too.