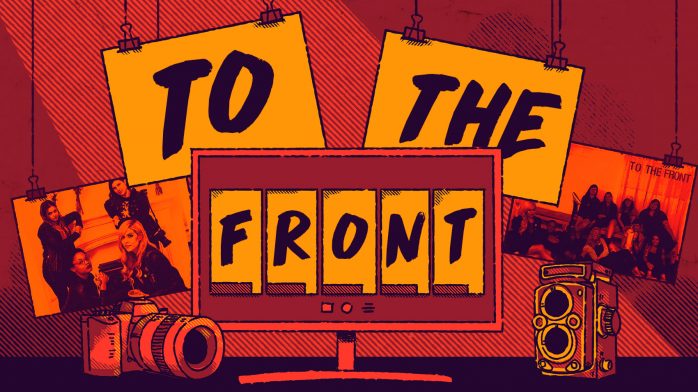 The founders of To The Front, despite an ongoing pandemic, have continued to expand their virtual community of artists
By Nikki Roberts / March 8, 2021 / DIY, Features

Like most industries, the music and photography industries were hit hard when COVID-19 forced live events and touring to cease operating in March 2020. Many artists and festivals quickly pivoted to livestream concerts, but Courtney Coles and Erica Perez, the founders of an online collective for women, trans and non-binary music photographers called To The Front DIY, wanted their post-COVID events to look a bit different than the norm—just like their traveling DIY photography shows had been.

When Coles and Perez formally met in 2013 at a musical festival—one “that will be unnamed, because it’s not Riot Fest,” laughs Perez—they had already met digitally through a community of music photographers on the Internet. Perez, who discovered her passion for photography when she took an elective film photography class in high school, was already a fan of Coles’s work and admits to geeking out over her photography online before the two met in person.

Coles and Perez bonded over many things: their love for documenting daily life and the moments they shared with their friends; the natural progression of bringing their cameras to live events to capture concerts and their friends’ gigs; and difficulties booking photography work in the Los Angeles music industry.

Coles believes part of their struggle was the influence social media has on record label management’s decisions when choosing photographers to work with their artists. Equating a certain number of followers online to the quality of  a photographer’s work and character is a dangerous assumption to make—and it disqualifies talented photographers who may not regularly use social media to promote their work.

And then there’s “the whole gender thing,” as Coles refers to it.

“It felt discouraging at the time to hear people say that you weren’t going to get a job because you were a girl—literally having people tell you that,” said Perez. “At the end of the day, my realization was that I don’t want to work for those people that are going to discriminate against anyone. There’s a lot of garbage in every industry and figuring out how to overcome it is what we’ve tried to focus on, and has gotten us through so far.”

The two didn’t realize how much of an issue representation was in the photography world until Coles was part of a gallery show in 2016. The curator of this particular show was fed up with being the only woman of color present at gallery shows—so instead of waiting for someone else to organize a show and pick her, she decided to curate an event that showcased the work of women of color.

When Perez showed up to support Coles, she asked if Coles would be interested in taking the show’s idea and applying it to music photography.

The two founded To The Front DIY with simple roots. They weren’t trying to reform the industry, but to create a space for the work of unrepresented music photographers to be seen and recognized.

“To The Front is more than just photographers and artists in music. It’s quite literally the biggest group of photo nerds. The foundation to all of us is that we love music and we love art. We love having fun and having a space that lets everyone be who they are, as they are,” said Coles.

Before the art show got its legs and began to travel across the U.S and Canada, the two artists hosted their first show at home in Los Angeles.

“At first, it was just Erica and our friends taking photos from [other photographers we knew via] the Internet, getting a space for a night, and just throwing them on the wall, having a go at it,” said Coles. “Instead of crying about not being chosen, let’s choose ourselves. Let’s put ourselves out there and put our work on the wall. Fast forward four years—here we are.”

“To The Front was a natural thing that happened not even as a solution, but as our answer to the problem,” adds Perez.

To The Front’s first show in L.A featured the work of Coles, Perez, and two of their friends. Through grassroots methods and connections developed online with photographers involved in DIY arts and music scenes, the collective expanded to host six shows in the United States and one in Canada that displayed the work of over 60 artists. Word of mouth from friends in bands and art scenes in other cities helped the show gain traction as it traveled across the country, and when the collective began to explore the idea of throwing its first international show in Canada, they looked to social media and were connected with a cafe and DIY space in Toronto.

There was no calculated submission process for who could participate in each show, because that would have “defeated the purpose of having an open, shared space that’s uplifting other artists,” said Perez.

However, there was one main hurdle: online, there was no limit to sharing work and uplifting photographers. At physical gallery shows, the collective often operated out of small DIY spaces where there were space limitations to how much art would fit on the walls.

“If an artist couldn’t make it in person and didn’t want to send their work, we’d open spots up to local artists for each city so it was somewhat fair without excluding anyone that’s been in our past shows, but also being open to new artists,” said Perez.

When To The Front cancelled their most recent planned show in Pittsburgh due to COVID-19, the shock began to set in for Coles and Perez. The founders took a mental health break as tours were cancelled and photographers lost work.

“I think we were kind of sitting in it for a hot second because it was all so wild. It went from booking your flight to a show you’re gonna have Pittsburg, to maybe we’re doing it, maybe not. Cases are slowly coming out and you’re coming to this realization of ‘this is a real virus, we truly cannot leave our homes and  live music is canceled forever’,” said Coles.

As the music and photography communities grieved their losses, Coles and Perez began to brainstorm. They didn’t want to immediately plan a livestream show—the alternative that many bands were using to replace live performance. Eventually, Perez approached Coles with an idea: the collective had started as an online community of artists, so why not host a virtual conversation where they could talk to each other about art?

To The Front hosted Twitch conversations on topics like graphic design, illustration and photography, but the collective also wanted to find a way to give back. All of their shows had been free of charge with a donation jar that benefited a local organization in each city they visited, and they continued that work by creating a reusable tote with all proceeds going to a local toy drive.

But being unable to gather and appreciate each other’s art in person left a void. Without live shows to photograph, many music photographers were feeling uninspired and lost, including Perez.

“I definitely had a hard time revisiting my music archives during quarantine. It kind of punches you in the gut to not know when shows or festivals will happen again. As someone that’s been going to shows every week, if not every other day, since I was a teenager, this is the longest I’ve gone without them. It’s definitely depressing” said Perez.

Perez wasn’t alone. Many music photographers, fans, and professionals were figuring out how to mourn the loss of live music, and they were losing their motivation to create without it. To encourage and connect with other photographers—and without the space constraints they previously faced at in-person shows—Perez and Coles decided to organize monthly photo challenges on Instagram that would be open to anyone who wanted to participate.

“At the core, both Erica and I want to make photography fun and accessible. The photo challenge opens up the door to other artists who didn’t see themselves as artists to throw their name in the hat,” said Coles.

Ilaria Maiorino, a photography student at the Brera Academy of Fine Arts in Milan, Italy, found To The Front on Instagram when a photographer she followed shared the collective’s February self-portrait photo contest on their story. She was attracted to the idea of getting creative with self-portraits because she’d been alone in quarantine for so long and was feeling a bit uninspired, but she was also drawn to the contest because it was open to whoever wanted to get involved.

“I was experimenting with long exposure and after looking at the prompt of To The Front DIY’s contest, I decided to insert myself in those experiments, too. I used light painting to cover my face and almost ‘delete’ it. The past year I had to deal a lot with my own emotions, feeling very low on creativity, I hated myself for that. My photo is a way to express those feelings and purple is the color I gave to this phase of my life. Many times, I’ve felt like photography wasn’t really my thing and I kept on comparing myself to others, but in the end, even in the toughest and darkest times, I always realize photography is the first thing I want to do to feel better,” said Maiorino.

Perez says seeing the response to To The Front’s photo challenges has been refreshing and encouraging. Like Maiorino, she feels she’s often her own worst enemy when it comes to sharing something she’s worked hard to create. It’s been rewarding for her to see new artists tagging To The Front online and tapping into their creativity after nearly a year of struggling in quarantine.

Once live events are safely able to resume, Coles and Perez don’t anticipate they’ll be stopping the Twitch conversations and photo challenges—they’re here to stay, in part because they can include artists who may not be able to make it out to shows or aren’t interested in displaying their art publicly. They also make connecting possible for artists like Maiorino who live out of the country and aren’t aware of any similarly minded artist collectives nearby.

“I think we’ll just continue to grow,” said Perez. “To The Front is something that we created and we share with a bunch of other creatives. It’s nice to know that there’s endless opportunities—it could be whatever we make it. I just want to be careful and stay to our roots, but also keep growing. We want to make sure that people that want to be included can be included, whatever that means—on a live stream or in an in-person show when they’re back. It’s important that happens and there’s not any reason why it can’t,” said Perez.