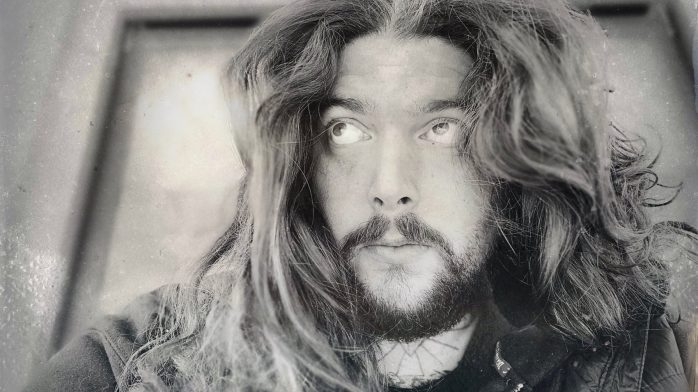 Danny Kiranos talks about his festival set, his love of rom-coms, and his latest record, Born Against
By Nikki Roberts / September 18, 2021 / Music, Riot Fest 2021

When I picked up the phone to interview Danny Kiranos—known as Amigo the Devil to his many fans—I wasn’t sure if he’d remember me. While working at Reggies Rock Club, Kiranos and I had briefly met twice but, outside of chatting together with his wife and using the cardboard backing of one of my notebooks to quickly scrawl a setlist in Sharpie, we hadn’t interacted much. When I recalled the last time he played Reggies in May 2019, it was clear I had jogged his memory.

“I remember exactly who you are,” laughed Kiranos. “It’s so nice to put a face to the voice on the other end of the phone.”

In the past year and a half, we’ve all had to make adjustments to how we interact with people. Phone calls with loved ones replaced regular social gatherings, Zoom calls replaced the conference room, and livestream performances attempted to replace concerts. Among all these remote alternatives, one common theme quickly became apparent: nothing is capable of replacing true, in-person reactions.

Although Kiranos recorded and released his second LP, Born Against, during a global pandemic, he struggled with the absence of live music, both in his personal life and as a performer. In this interview, he discusses finding his confidence and songwriting during quarantine, his approach to the growing popularity of livestream performances, and taking the (actual, in-person) stage at Riot Fest 2021.

Listening to your new album Born Against, I felt it was a lot gentler—more strings and some ballad adjacent sounds— han your previous releases. Would you agree with that perception?

I don’t want to use the word “tender,” but there’s a more considerate side to Born Against. That was huge for me, because it’s more along the lines of what I’ve always wanted to do, and closer to what I generally listen to. It felt good to be able to create what was closer to home for me, but I know it was definitely a shift for a lot of people. I guess that’s just one of the aspects of growth. I could either accept that growth and pursue it as the person writing and recording, or just try to recreate what I had already done, which felt redundant.

What was holding you back from creating the type of music you had always wanted to?

A few different things. First of all, I didn’t necessarily have the ability to, physically. I don’t think I was in a place where I could create a lot of those soundscapes myself.

Also, you know the concept of the guilty pleasure? I think it’s a very damaging concept that makes people embarrassed for things they should never feel embarrassed about. You should just enjoy what you enjoy. It’s not a “guilty” pleasure. It’s just pleasure. It’s one of those scenarios where, like in the first song [“Small Stone”], we’re mimicking this big, operatic vibrato type of thing, and I love opera. I love people like Demis Roussos, who had that big, booming operatic voice, but I was always too embarrassed to try pursuing it because I thought I would fail, and because I thought that it would sound silly for me to do it. This is the first time that I decided I don’t really care, because holding back based on how other people are going to react is ridiculous. I developed a slow, growing confidence over time. A little bit about that had to do with the people that I had around me in the studio, as well. They were very welcoming, very open, very motivating, and I felt very confident around them.

Your Twitter bio is “helping dark hearts tell their love story, one song at a time.” There’s so many great narratives in your songs, and I was hoping you could expand on the stories you tell in your songs.

Especially at the beginning, one of the intentions of this project was to explore the other side of the love song. Not the damaging side, not the bad side. Not everybody has the same intention of the traditional love song, the “falling for each other” part. For example, for people who love horror movies or people who are into true crime, it’s not always going to be the rom-com love song. And I personally love romantic comedies, I’m a sucker for rom-coms, they’re one of my favorite genres of movie.

But not everybody wants to hear the same story. So I figured, how do we tell stories that touch on these negative aspects of humanity, while still bringing in the positive relationship, the reality of love, right? Love is not always great. Love is pretty treacherous and horrifying sometimes, whether it works out or not. So I focused on that side of love. And as the project grows, I’m still trying to figure out how to explore that, because there are so many sides and facets to it. It’s a really interesting dynamic from record to record where I grow as a person, while growing through the songs. I realize I could have written that one better, or maybe I shouldn’t have written that one at all. Maybe that story didn’t need to be told. It’s a constant learning curve, and I don’t think I’ll ever know what I’m doing. I think I’m always going to be learning and changing.

Is there a conscious decision when you decide which stories you want to tell?

I think I focus more on one, singular emotion at a time. For example, jealousy. And then I ask myself, how do we write a story about jealousy? How do we encompass everything around that one, singular concept of jealousy? I tend to write from the core outward, and the story usually ends up being a side effect, just a byproduct, more than anything.

There’s a lot of biblical references in your songs, and as someone who was raised in a very religious household, I’m curious to know if a  religious upbringing was an influence on the references you incorporate in your lyrics.

My mom definitely took me to church. Catholic. I think she was religious because of duty. That’s just what we did. We went to church on Sunday and we talked about God, but it wasn’t a strict household. But I was always very, very fascinated by religion. I’ve always loved the concept of faith, but the one thing I never saw in church was faith. I always saw the motions, and it was an interesting duality within me because I didn’t necessarily believe in religion itself, but I’ve always believed in faith of something.

When I became a teenager, I remember my mom saying, “I don’t know why we do this,” and then we stopped going to church, and we never talked about God again. But that curiosity always stuck with me. I read as much as I could about different religions. I’ve always been fascinated in that aspect of faith, not actual religion. A lot of people think that I am this big, anti-God person or anti-religion. I’m anti-people using their religion to harm others, but I fully support anybody finding whatever faith they need to become the best version of themselves. I don’t think anybody should be judged or crucified, no pun intended, for what they believe, but so many people use it as a weapon as opposed to a tool of good faith. That’s the part that kind of creeps into the songs. There’s definitely a lot of faith-driven lyricism, and I try to make it a little open ended so that nobody feels like I’m personally attacking their face.

Your livestream concert, Caving In, was a more intimate take on the livestream format. How did you come up with this concept?

We were late to the livestream, and part of that was because I didn’t know how to make it feel the same as a live show. The main result of all of that searching and asking and planning was that it’s not possible. You cannot make a livestream feel like a live show. At a show, you have the bond between the people listening and the people playing, and that creates this unity that becomes one giant ball of energy. You can’t do that through devices.

I was craving music. I watched a lot of livestreams. And it was disheartening because I kept seeing people that I’ve seen live trying to have the same energy, trying to do the same, well, whatever it is that they do live. And you can just see in their eyes that it was crushing. It wasn’t the same. It was not natural. And it almost hurt me more to see people fail at that replication, than the joy I got from watching music.

We decided to see it from a different aspect and treat it as something completely different, which is how the cave concept came about. I figured, hey, if we’re going to do this, let’s try to find the most lonely place possible. All I could think about was being stuck in a cave, isolated from the world, that kind of vibe. I’ll play songs, no banter. I’m not going to try to tell jokes. I’m not going to try to connect with a digital crowd. So I just played the song, and we treated it as song after song after song after song, and it felt more natural. It felt less like we were trying to replace live shows. I’m not trying to convince you that this is a live show. We’re just playing some songs in the cave.

I’m so glad that we’re able to transition away from the livestream shows and back to real life stages, because I also felt that remote concerts only deepened my desire to be back at a real, in-person show.  I’ve seen you perform in small clubs before—with Riot Fest, what’s different?

I definitely have a different [festival] setlist. It’s not even depending on the lineup, it’s what time of the day I play. If I was playing around 6:00 p.m., and the sun was going down… this sounds really silly, but it has actually worked. The mood then becomes a little more somber. People are in that sleepy time between a late lunch and taking their afternoon nap before the night shows, so I’ll play a slower set. If it’s early in the daytime, I’ll try to just be active. If it’s nighttime, same thing: active with a few slow songs sprinkled in.

When it comes to incorporating the new stuff, I have no idea what I’m going to do because I’ve never had this many songs. I never thought it was gonna be a problem because I’m a slow writer. Not gonna lie, it takes me a million years to finish a song. Anytime I do get a new batch of songs, I’m like, wow, I did it!

It happens this way, not by choice: I get a first verse and a chorus. And then the song is done. I’m stuck forever. And from there, I’ll usually write 20 or 30 different versions of every song, and then I get lost because I don’t know which one is actually the correct one. So I usually just end up picking one. I’m not even confident about it. I just kind of go, this is fine. This will work.