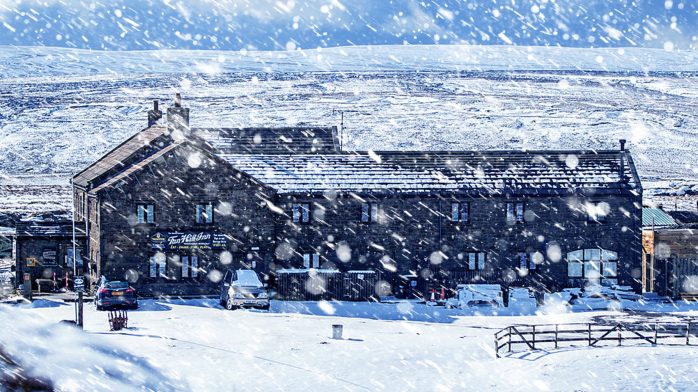 It’s everyone’s worst winter nightmare: you walk into a bar, you’re snowed in for the night, and you’re trapped inside with an Oasis cover band. Oh, and for three whole nights. Sounds like the set-up to a great joke, right?

Last Friday night (November 26) in Yorkshire, England, a severe snowstorm hit Yorkshire, England, where the Tan Hill Inn was hosting an Oasis tribute band called Noasis that night. With three feet of snow surrounding the pub and no paved roads, local authorities deemed it unsafe for attendees, as well as the band, to travel home; those inside would end up spending 3 nights inside the pub.

Naturally, we know what you’re thinking: did the band play more “Wonderwall”? In karaoke form, at the least—the inn’s general manager Nicola Townsend said the crowd was keeping spirits up through activities like taking quizzes, watching movies and, of course, singing Oasis songs. “Lots of Oasis at the moment,” Townsend told a reporter on a live broadcast. Said broadcast can be viewed below.

As of Monday (November 29), everyone has finally been rescued. All jokes aside, it was far from the worst case scenario… after all, can you imagine getting snowed in at an Eve 6 show?